In colonial families, the father had absolute authority over his family, and wives and children were expected to do as they were told. And everyone, even young children, worked to sustain the family.

The husband and father

Ideally, and legally, the husband and father was the head of the household, with absolute legal rights over his dependents -- his wife, children, servants, and the people they enslaved. He was often referred to in colonial society as a "patriarch," a biblical term that reminded people of religious authority. A man was to provide for his wife and children’s physical well being, making sure they were fed, clothed, and sheltered.

Very little could be decided at home without the consent of the father. Although the father had absolute authority, though, he was expected to govern with love and compassion. And for most of the colonial period, husbands and wives were far more equal in terms of household management. The rough life of colonial society, especially on the frontier, required that husbands and wives work as a team if they were to sustain their families.

But the husband was still his wife's superior, and he expected that his kind treatment would be returned with devotion and submissiveness. Society expected that a man would consult with his wife about the welfare of their family, but if they disagreed, his will prevailed. An eighteenth-century minister, Benjamin Wadsworth, wrote that "wives are part of the house and family and ought to be under a husband’s government... Though he governs her he must not treat her as a servant, but as his own flesh, he must love her as himself."

Because the man was legally the head of his household, he had to pay for the debts of his wife and children (under the age of twenty-one). If his wife or children committed a crime, he would be liable for any fines and he had to assure the courts that his dependent would behave better in the future. If a child or wife were a victim of a crime, the patriarch would take the matter to the justice of the peace and make sure that the perpetrator was brought to justice.

Fathers were responsible for educating their children, morally and intellectually. A father, whatever his economic situation, was expected to help his sons find work. If he were a merchant, his sons would work for him, learning business and trade. Most likely, the eldest son would inherit the business. Other sons would often start their own business, learn a trade, or work for their brother or for another merchant.

Small farmers would usually have their sons work on the family land or send them to work for neighbors to earn money to buy their own land. A father might also arrange for his son to be an apprentice and learn a trade, such as blacksmithing or barrel making.

Wealthy families usually divided up their lands among their children, but favored the eldest son. Other sons might be set up in merchant shops, or be given financial support to buy their own lands and build their own estates, perhaps on the frontier.

Although mothers provided most of their daughters' education, a father was expected to provide financially for his daughters until they married. If he were a poor man, a father would help his daughter find work as a servant or as hired help with a respectable family. Men of moderate financial means would have their daughter stay at home to help their mother run the household and raise younger brothers and sisters. Some daughters would work in the family business.

If a man had a child with a woman to whom he was not married, he was brought before the local magistrate and required to pay a fine. He was usually required to pay a small child support fee to help maintain the child until she or he was five years old. At that age, the child would often become an indentured servant and be sent to live with a family in the community. The money he paid, however, was much less than what was needed to support a child.

When a woman married, she lost her legal identity -- she became one with her husband. Her husband now represented her in all their social and legal dealings. Any property she had, any debts she incurred, and any money she might make belonged to her husband.

When he died, she would be given one-third of his property, and the rest would pass to a male heir. A man could make different arrangements in his will, though, and sometimes husbands left their entire property or businesses to their wives. Because of this practice, there were many businesses, such as taverns or artisan shops, that were owned and run by women. Eventually a son would take over the business, but so long as a woman did not remarry, she could retain her independence.

A wife's duties to her husband

A wife was supposed to be submissive to the will of her husband and be dutiful and faithful. For example, if her husband decided to move the family, she was expected to follow him without question.

We have some evidence, particularly from women’s diaries and letters, that suggests that women tried to live up to this ideal. While many women had husbands who treated them with kindness, some women poured into their diaries their woes and grief about a husband who was irresponsible with money or physically abusive. Even then, these women tried to be obedient wives, hoping that through love, kindness, and prayer, their husbands would change their ways.

When a woman married, she began a cycle of childbirth that lasted until she was in her forties. Because colonial woman married around the age of twenty, they would often have about seven to ten children. It was not uncommon for women to have more than twelve. Many children didn't survive until adulthood, though. One in ten infants died before they were a year old, and four in ten children died before the age of six.

Childbirth was the leading cause of death for women in colonial America. Sometimes a woman would die due to complications from the birth, or a few weeks afterwards from an infection.

A woman was also responsible for milking the cows and making butter and cheese. She made soaps and candles, sewed and mended all of the families clothing. She cooked, cleaned the house, and did laundry. Without any of our modern technologies, all of these tasks were done by hand, so we can only imagine how hard these women had to work!

It would have been a financial luxury for a white family to enslave and own a household laborer. Most enslaving families in North Carolina enslaved fewer than ten people, and the people they enslaved primarily worked as farm hands or in the workshop. To help the wife with her work, wealthy families would have hired a servant, usually the daughter of a neighbor or a family member. Eventually, a woman would have several daughters who would help her with her duties.

Childhood ended very early in colonial society. Until the age of four, children were dressed in gender-neutral gowns, which marked their non-adult status. They were usually free to play and had few responsibilities. But by the age of three or four, children were given small chores to do around the house, such as gathering sticks to be used to start fires or feathers to be used to make beds and pillows. Children as young as four were taught to knit and make stockings. Once they turned five, they were dressed in clothing very similar to adult clothing and given more responsibilities. Boys would go to work with their fathers, and daughters were given more household chores.

Parents put their children to work for practical and economic reasons. There was so much work to be done in a household that parents needed children to help out as soon as they were able. Giving children work tasks also kept them occupied and out of danger. Fathers and mothers had many responsibilities, and they could not be constantly watching or entertaining small children. There were also religious motivations behind putting children to work as early as possible. Idleness was considered a sin, even in children. Parents believed that it was their moral responsibility to teach children to be productive. While there might be some time for children to play, they were expected to be busy working for most of the day.

Adults in colonial America often died young by today's standards, and many children lost their parents and were raised by step-parents. When a parent remarried, their new spouse often had children from a previous marriage, so families were a blend of full-, half-, and step-siblings. And because a married woman usually continued to have children into her forties, older children might be married and starting their own families while their parents continued to have children. It was not uncommon for a youngest child to have a niece or nephew older than he or she was!

Children were to show the utmost respect to their parents. A father would whip a child who was rude, stubborn, or impolite. Colonists generally believed that society should be a hierarchy in which people were ordered from top to bottom and that everyone in society should know their place in the social order. People should be kind to those beneath them but show the utmost respect to their superiors. This was modeled at home. Children were supposed to do as they were told by their parents and be polite to any servants or enslaved laborers in the household.

Once a child was grown, he or she was still expected to seek advice and guidance from his or her parents. We have letters between grown children and their parents in which children not only provided their parents with news and gossip, but also sought advice on finances, business, household management, and rearing their own children. 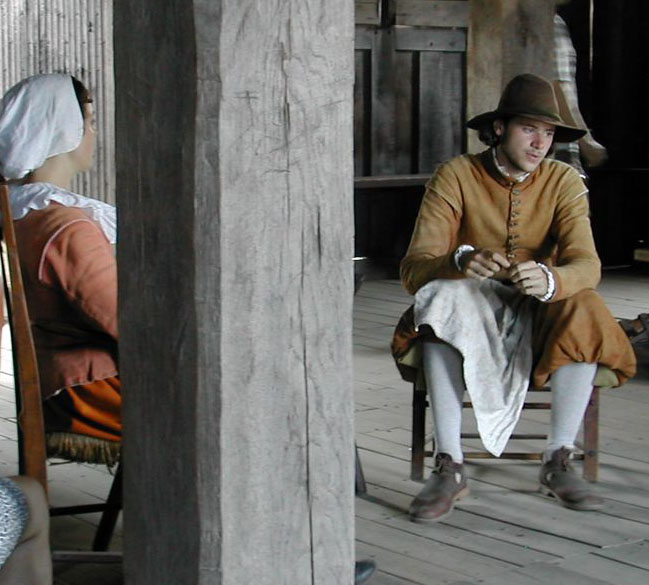 Husbands and wives had to work as a team in order to sustain their families. 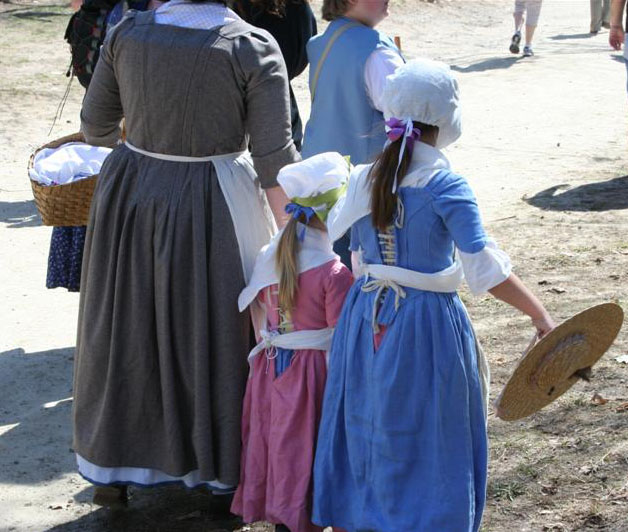 Women often had seven to ten children, and childbirth and motherhood were major parts of women's lives. 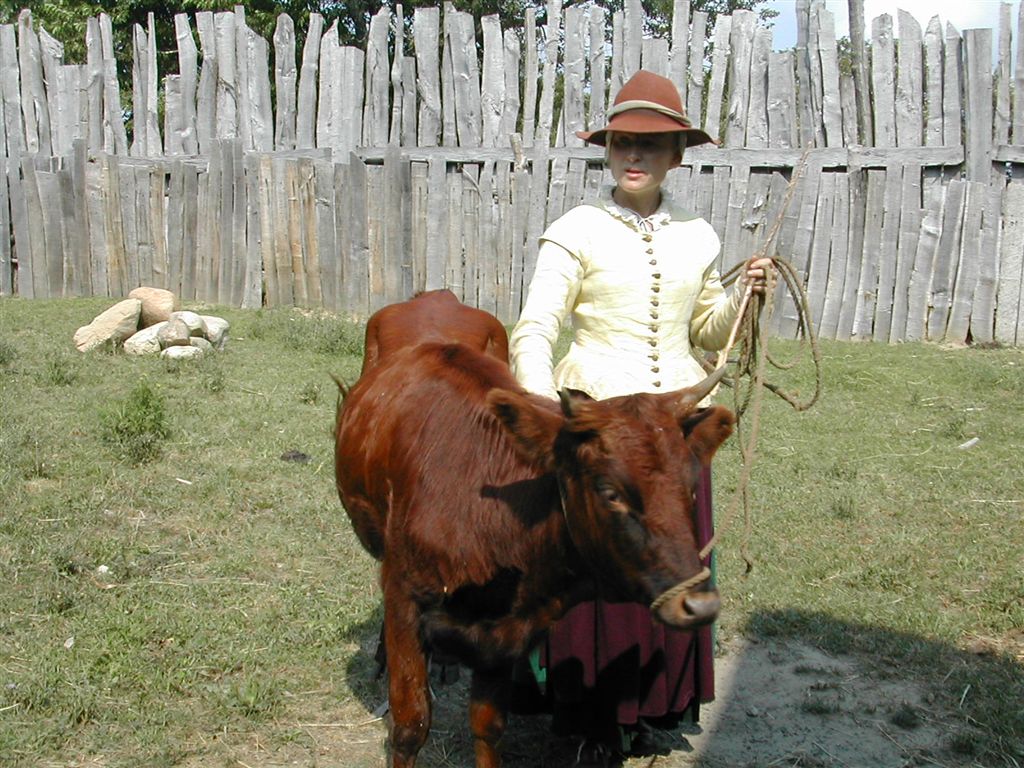 Women's work was crucial to a family's survival.

In this video, reenactors demonstrate some common toys and games from colonial America. A video transcript is available. 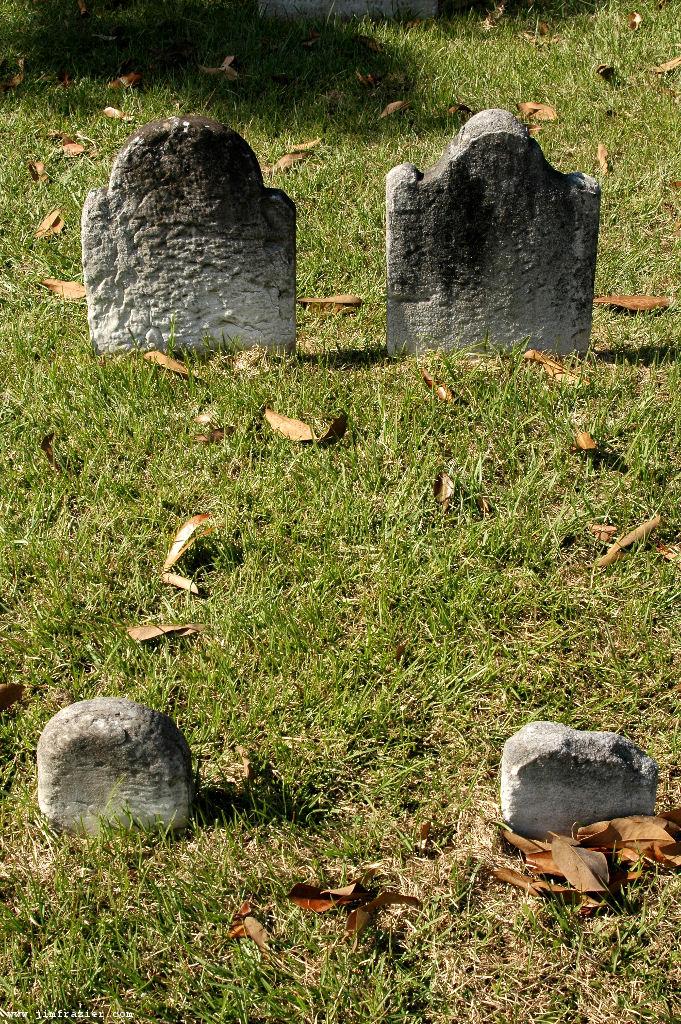 People in colonial times died young by today's standards, and widows, orphans, and step-families were common.