The Great Depression: An Overview

What caused the Great Depression?

Economists continue to study the Great Depression because they still disagree on what caused it. Many theories have been advanced over the years, but there remains no single, universally agreed-upon explanation as to why the Depression happened or why the economy eventually recovered.

The 1929 stock market crash often comes to mind first when people think about the Great Depression. The crash destroyed considerable wealth. Perhaps even more important, the crash sparked doubts about the health of the economy, which led consumers and firms to pull back on their spending, especially on big-ticket items like cars and appliances. However, as big as it was, the stock market crash alone did not cause the Great Depression.

Some economists point a finger at protectionist trade policies and the collapse of international trade. The Smoot-Hawley tariff of 1930 dramatically increased the cost of imported goods and led to retaliatory actions by the United States’ major trading partners. The Great Depression was a worldwide phenomenon, and the collapse of international trade was even greater than the collapse of world output of goods and services. Still, like the stock market crash, protectionist trade policies alone did not cause the Great Depression.

Other experts offer different explanations for the Great Depression. Some historians have called the Depression an inevitable failure of capitalism. Others blame the Depression on the “excesses” of the 1920s: excessive production of commodities, excessive building, excessive financial speculation or an excessively skewed distribution of income and wealth. None of these explanations has held up very well over time. One explanation that has stood the test of time focuses on the collapse of the U.S. banking system and resulting contraction of the nation’s money stock. Economists Milton Friedman and Anna Schwartz make a strong case that a falling money stock caused the sharp decline in output and prices in the economy. As the money stock fell, spending on goods and services declined, which in turn caused firms to cut prices and output and to lay off workers. The resulting decline in incomes made it harder for borrowers to repay loans. Defaults and bankruptcies soared, creating a vicious spiral in which more banks failed, the money stock contracted further, and output, prices and employment continued to decline.

Money makes the economy function. Money evolved thousands of years ago because barter—the direct trading of goods or services for other goods or services—simply didn’t work. A modern economy could not function without money, and economies tend to break down when the quantity or value of money changes suddenly or dramatically. Print too much money, and its value declines—that is, prices rise (inflation). Shrink the money stock, on the other hand, and the value of money rises—that is, prices fall (deflation).

In modern economies, bank deposits—not coins or currency—comprise the lion’s share of the money stock. Bank deposits are created when banks make loans, and deposits contract when customers repay loans. The amount of loans that banks can make, and hence the quantity of deposits that are created, is determined partly by regulations on the amount of reserves that banks must hold against their deposits and partly by the business judgment of bankers.

In the United States, bank reserves consist of the cash that banks hold in their vaults and the deposits they keep at Federal Reserve banks. Reserves earn little or no interest, so banks don’t like to hold too much of them. On the other hand, if banks hold too few reserves, they risk getting caught short in the event of unexpected deposit withdrawals.

In the 1930s, the United States was on the gold standard, meaning that the U.S. government would exchange dollars for gold at a fixed price. Commercial banks, as well as Federal Reserve banks, held a portion of their reserves in the form of gold coin and bullion, as required by law.

The money stock fell during the Great Depression primarily because of banking panics. Banking systems rely on the confidence of depositors that they will be able to access their funds in banks whenever they need them. If that confidence is shaken—perhaps by the failure of an important bank or large commercial firm — people will rush to withdraw their deposits to avoid losing their funds if their own bank fails.

Because banks hold only a fraction of the value of their customers’ deposits in the form of reserves, a sudden, unexpected attempt to convert deposits into cash can leave banks short of reserves. Ordinarily, banks can borrow extra reserves from other banks or from the Federal Reserve. However, borrowing from other banks becomes extremely expensive or even impossible when depositors make demands on all banks. During the Great Depression, many banks could not or would not borrow from the Federal Reserve because they either lacked acceptable collateral or did not belong to the Federal Reserve System.

Starting in 1930, a series of banking panics rocked the U.S. financial system. As depositors pulled funds out of banks, banks lost reserves and had to contract their loans and deposits, which reduced the nation’s money stock. The monetary contraction, as well as the financial chaos associated with the failure of large numbers of banks, caused the economy to collapse.

Less money and increased borrowing costs reduced spending on goods and services, which caused firms to cut back on production, cut prices and lay off workers. Falling prices and incomes, in turn, led to even more economic distress. Deflation increased the real burden of debt and left many firms and households with too little income to repay their loans. Bankruptcies and defaults increased, which caused thousands of banks to fail. In each year from 1930 to 1933, more than 1,000 U.S. banks closed.

Banking panics are pretty much a thing of the past, thanks to federal deposit insurance. Widespread failures of banks and savings institutions during the 1980s did not cause depositors to panic, which limited withdrawals from the banking system and prevented serious reverberations throughout the economy.

The monetary hemorrhage experienced during the Great Depression finally ended when President Franklin D. Roosevelt declared a national bank holiday just one day after he took office in March 1933. Roosevelt ordered all banks closed, including the Federal Reserve banks. He permitted them to reopen only after each bank received a government license. Meanwhile, the federal government set up a temporary system of federal deposit insurance and followed up a year later by creating the Federal Deposit Insurance Corporation (FDIC) and a permanent deposit insurance system.

Roosevelt’s policies restored confidence in the banking system, and money poured back into the banks. The money stock began to expand, which fueled increased spending and production as well as rising prices. Economic recovery was slow, but at least the bottom had been reached and the corner turned. History books often credit Roosevelt’s New Deal for leading the economic recovery from the Great Depression. Under the New Deal, the government put in place many programs of relief and recovery that employed thousands of people and made direct cash grants or loans to individuals, firms and local governments. However, at least in the first few years of the New Deal, federal government spending did not increase substantially.

Furthermore, some aspects of the New Deal may even have hampered recovery. For example, some economists believe that the National Recovery Act (NRA) may have slowed the recovery by encouraging the formation of industrial cartels, which limited competition and may have discouraged employment.

Others note that some New Deal agricultural programs perversely discouraged production and reduced the demand for farm labor. Still, by restoring confidence in the financial system and in the U.S. economy as a whole, Roosevelt’s policies undoubtedly did much to spark the economic recovery.

Could it happen again?

That’s the big question. As economists have learned more and more about the importance of monetary and banking forces in both the contraction and recovery phases of the Great Depression, they have recognized the importance of sound macroeconomic policies in ensuring a strong economy. The Great Depression was not a failure of capitalism or of markets, but rather a result of misguided government policies—specifically, the Federal Reserve allowing the money stock to collapse as panics engulfed the banking system. If the Fed had stepped up to the plate and ensured that banks had ample reserves to meet their customers’ withdrawal demands, the money stock would not have declined, and the economy probably would not have sharply contracted.

Although the Fed could not by law directly lend to banks that did not belong to the Federal Reserve System, the Fed could have purchased securities in the open market and flooded the banking system with reserves. Since the Great Depression, the Federal Reserve has responded faster to shocks that have threatened the banking and payments system. The Great Depression also demonstrated the importance of price stability. Deflation was an important cause of falling incomes and financial distress, as households and firms found it increasingly difficult to repay debts. Because debt contracts almost always specify repayment of a fixed-dollar sum, deflation increases the real cost of a given nominal debt.

Thus, deflation often leads to increases in loan defaults and bankruptcies, which in turn raise the number of bank failures and produces further declines in income, output and employment. Price stability is now widely accepted as the paramount goal for monetary policy because fluctuations in the price level—whether deflation or inflation—can cause financial instability and hinder economic growth.

It is unlikely that doctors will ever find a cure for the common cold. Similarly, it is unlikely that economists will ever find a remedy for the negative effects of the business cycle. From time to time, shocks will hit the economy and will cause output and employment to fluctuate. However, the Great Depression has taught us that sound economic policies will help ensure that ordinary fluctuations in output and employment do not grow into major economic catastrophes.

Hard times: Voices from the Great Depression on NC Coast

The Great Depression on NCPedia 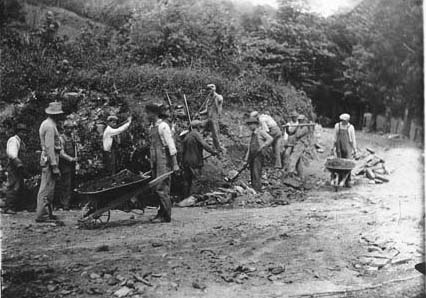 Workers with shovels and wheelbarrows work to improve Sandy Flat-Shulls Mills Rd. in Watauga County, North Carolina. The project was part of a partnership between the Emergency Relief Administration and the state of North Carolina Highway Department to improve the infrastructure of the state and provide jobs during the Depression.

from Crash Course US History 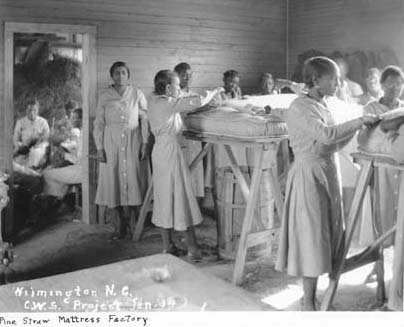 Women stuff mattresses with pine straw in a factory in Wilmington, North Carolina. This work was a project of the Civilian Works Service.

The Great Depression and the Present Day Lesson Plans