A group of 20 Negro students from A&T College occupied luncheon counter seats, without being served, at the downtown F.W. Woolworth Co. Store late this morning -- starting what they declared would be a growing movement.

The group declared double that number will take place at the counters tomorrow.

Employees of Woolworth did not serve the group and they sat from 10:30 a.m. until after noon. White customers continued to sit and get service.

Clarence Harris, Woolworth manager, replied "No comment" to all questions concerning the "sit-down" move about Woolworth custom, and about what he planned to do.

Today's 20-man action followed the appearance at 4:30 p.m. yesterday of four freshmen from Scott Hall at A&T who sat down and stayed, without service, until the store closed at 5:30 p.m.

Student spokesmen said they are seeking luncheon counter service, and will increase their numbers daily until they get it.

Today's group came in at 10:30 a.m. Each made a small purchase one counter over from the luncheon counter, then sat in groups of three or four as spaces became vacant.

There was no disturbance and there appeared to be no conversation except among the groups. Some students pulled out books and appeared to be studying. The group today wrote to the president of Woolworth asking "a firm stand to eliminate this discrimination," and signed the letter as members of the Student Executive Committee for Justice.

Spokesmen Franklin McLain and Ezell Blair Jr., stated that the group is seeking luncheon counter service and will continue its push "several days, several weeks ... until something is done."

Both declared the movement is a student one, with no backing from the National Assn. for the Advancement of Colored People. They said they expect they could count on NAACP backing if needed. The move is not school connected, they added, but they hope to encourage more students to participate and hope that Bennett College students will joinBennett College is a historically black women’s college in Greensboro. By February 4, white women from the Women’s College (now UNC-Greensboro) and high school students had also joined the protest..

Four leaders, who were at Woolworths yesterday and again today, were named as McLain, of Washington; Blair, of Greensboro; David Richmond, Greensboro, and Joseph McNeill, Wilmington, all freshmen. They said today's groups came chiefly from Scott Hall at the college.

Blair declared that Negro adults "have been complacent and fearful." He declared "It is time for someone to wake up and change the situation... and we decided to start here."

McLain said no economic boycott is planned. "We like to spend our money here, but we want to spend it at the lunch counter as well as the counter next to it."

Dr. George C Simkins Jr., head of the local chapter of NAACP, said that organization had no knowledge of the movement prior to its arising spontaneously. He said the group is 100 per cent behind the idea, and "if any legal action arises as a result, the NAACP is prepared to back the group." 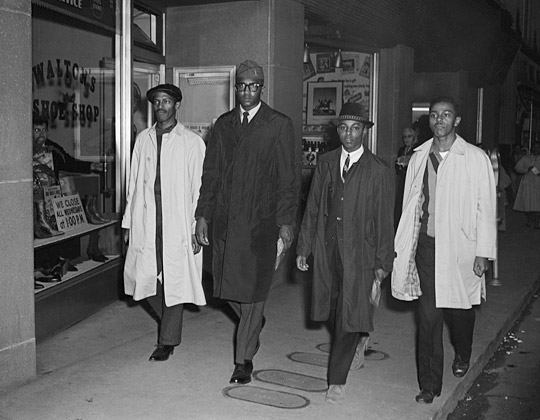 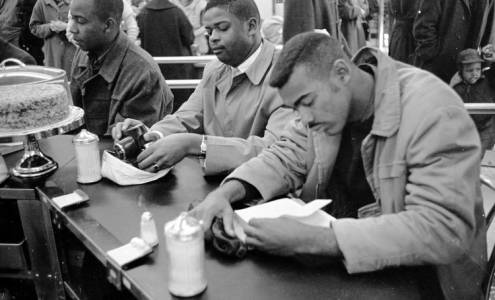 Sit-in demonstrators at Woolsworth lunch counter, Durham, NC. Demonstrators often brought school work or something to do while they waited to be served. Courtesy of the NC Digital Collections