Born in the small town of Ellerbe in Richmond County, Frye worked long and hard to make his dreams come true. "Develop good habits -- they will serve you well throughout life" is another adage that guided his existence. Justice Frye grew up in the Jim Crow era, where life was harsh and unjust for black people. In spite of this, he managed to realize his dreams.

Justice Frye worked hard in school and went to North Carolina A&T University in Greensboro, where he graduated with highest honors. After college, he entered the United States Air Force and rose to the rank of captain before leaving after four years. Up to that point in his life, the ideals and ideas he worked toward had come true. However, when he returned home to Ellerbe, he found that his hard work and preparation were no match for the systems put in place to keep black people from advancing. This realization came when Frye tried to register to vote. He had to pass a test in order to sign up to vote.

In the years before the Voting Rights Act of 1965, black Americans who wanted to vote had to answer questions that most other Americans could not. Voting registrars often wanted to know things like the names of all the signers of the Declaration of Independence. Sometimes the black person who wanted to vote had to guess the number of jellybeans in a jar. Roadblocks to voting like these were part of what is known as the Jim Crow era, a time when laws barred black people from access to employment and to public places such as restaurants, hotels, and other facilities. In the South especially, black people lived in fear of racially motivated violence because of laws that destined them to be second-class citizens.

Being refused the right to vote after serving his country in the military upset Frye. However, just being upset was not enough; Frye decided to do something about it. He decided to become a lawyer. Justice Frye graduated in 1959 with honors from the Law School at the University of North Carolina. This was a precedent, for he was the first black person to enter the UNC Law School as a first-year student. His graduation from law school began a lifetime of fighting for fairness and justice.

In 1963, he became the first black assistant U.S. District Attorney. Five years later, he won a seat in the North Carolina General Assembly. No other black person had been elected to the General Assembly since 1899. After serving in the state House of Representatives from 1969 until 1980, he was elected to the state senate. As time went on, he accomplished other firsts. In 1983, Frye was appointed to the North Carolina Supreme Court and in 1999, Governor Jim Hunt tapped him to be the chief justice of the state Supreme Court. This was the first time an black person had sat on the highest judicial bench in North Carolina.

Honored in September 1999, with a historic marker in Greensboro in front of 200 S. Elm Street, Justice Frye is one of North Carolina's most impressive citizens. The marker lists his accomplishments: first black Assistant U.S. District Attorney (1963), first black member of the General Assembly since 1899 (1968), and first black person appointed to the N.C. Supreme Court (1983). Also on the marker is the fact that Frye organized and served as president of Greensboro National Bank, the first black owned bank in Greensboro.

Throughout his life, Justice Henry Frye has been an inspiration to thousands of people. He knew he could do something. And he did. 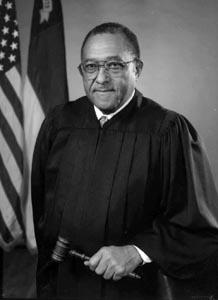