1923 is often recognized as the beginning of the country music recording industry, and Ernest Thompson of Forsyth County was one of its first hillbilly recording artists. The term "hillbilly" referred primarily to white southern stringband musicians of the period. In the decades following, the "hillbilly" sound would branch out into bluegrass and country & western music.

In the early '20s, A&R (Artist and Repertoire) men from the North were scouring the South trying to figure out what was going to sell. Their efforts were at best helter-skelter.

What they did know, however, was that Okeh #4890, a record of solo fiddler and singer John Carson singing "Little Old Log Cabin in the Lane" and "The Old Hen Cackled and the Rooster's Going to Crow," was selling as fast as they could make them, despite his A&R man's claim that the record sounded "pluperfect awful." The once inconceivable market of white rural southerners had finally been tapped, and there was lots of money to be made. Record companies were in a desperate scramble to snap up talent for this new market that they didn't really understand.

Last Tuesday Ernest Thompson was a farmer living on a small tract of land near Tobaccoville. This morning he is an employee of the Columbia Phonograph Company, having made 44 records... at the salary of $100 a week and expenses. It all happened this way... William S. Parks, regional representative of the Columbia Phonograph Company... came to Winston-Salem last Tuesday in his quest... he discovered a blind man, sitting in the doorway of a humble home. The blind man was Thompson. Sitting there in the warm April sunshine, Thompson played and sang a number of old southern melodies and folk songs. The more he played and more he sung, the more convinced was Mr. Parks that he had found the man he was looking for.1

Just how "hillbilly" was Ernest Thompson and other early hillbilly recording artists from the Northwest Piedmont? Probably not as much as the record companies made them out to be. The newspaper article about Thompson sets up a very idealistic hillbilly image, that of Thompson down on his farm playing and singing a number of old southern melodies and folk songs. Thompson certainly did live on a farm and he did play a number of traditional numbers, but as folklorist Bob Carlin states, "Thompson's recorded repertoire from those first sessions runs counter to the common image of the country rube performer. Rather than emphasizing old English ballads or Celtic fiddle pieces, Thompson, as did many of his contemporaries, favored Tin Pan Alley compositions of a recent vintage."2

According to old time musician Kirk Sutphin's interviews with Thompson's sister Agnes, much of Thompson's repertoire came from early cylinder recordings. Certainly such integration of "turn of the century popular music" is one of the distinguishing characteristics of 20th century Piedmont stringband styles.

In total, Ernest Thompson would record thirty-four sides for Columbia, all in 1924. Unfortunately, Thompson's records did not sell well. The same is true for other Northwest Piedmont musicians who recorded during this period, such as the North Carolina Cooper Boys of Lexington, as well as Matt Smith and Frank Miller of Stokes County. But the recorded legacy of these musicians, coupled with the September 22, 1927 Okeh record company recording session in Winston-Salem, offer valuable insights into the Golden Age of hillbilly records.

1927 Okeh recording session and area musicians who recorded there

In September 1927, in one of the earliest recording sessions outside of New York City, representatives from the Okeh record company traveled south to Winston-Salem to record hillbilly musicians at the old West End School. The North Carolina Cooper Boys, a trio from the Lexington area, recorded six cuts at this session. This group had instrumentation and style similar to the North Carolina Ramblers, known as the most popular North Carolina string band of the '20s. According to Bob Carlin, at the heart of the North Carolina Cooper Boys were two cousins from Rockingham County, Tom Cooper (guitar and vocalist) and Dewey Cooper (fiddle and vocalist) who had settled in the Lexington area, following the classic pattern of farmers turned millworkers. The trio's banjo player, Clay Everhart from Lexington, also played music as a sideline, making most of his money working in factories in Davidson and Guilford counties.

The duo of Matt Simmons and Frank Miller were other early hillbilly recording artists from this region who recorded at the 1927 Okeh session. Both Simmons and Miller also recorded for the Edison label. It is theorized that guitarist Simmons was a native of Stokes County, where he worked as a mailman. Frank Miller was apparently a vocalist only and did not play any instruments. He is believed to be a native of Alleghany County who later settled in Stokes. We also know that Simmons played some with Preston Fulp.

The 1927 Okeh session in Winston-Salem illustrates some of the stereotypes being created by the new hillbilly recording industry. Carlin notes that the headline of the Twin Sentinel account of the Okeh recording session, "Mountain Folk Music Being Recorded Here," illustrates the misconception that stringband music is solely a product of the mountain South.

African American stringband musicians did not fit into the recording company's image of "the mountains." If Preston Fulp had tried to record at the Winston session, he would likely have been turned away. His best hope for recording during the '20s and '30s would have been to turn to his new blues rather than his native stringband repertoire. African Americans were definitely an important part of the record company's sales strategy, but despite similarities in repertoire and approach, black musicians in the South were segregated into their own category of blues and gospel "race" records.

The history of "hillbilly" records in Forsythe County in the 1920s and 1930s. 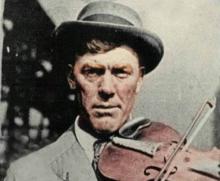 Fiddler Gid Tanner of Georgia, along with his band the Skillet Lickers, became one of the earliest stringband music stars in the 1920s.