Millions of women and men from around the world have decided to immigrate to the United States. That fact constitutes one of the central elements in the country’s overall development, involving a process fundamental to its pre-national origins, its emergence as a new and independent nation, and its subsequent rise from being an Atlantic outpost to a world power, particularly in terms of its economic growth. Immigration has made the United States of America.

Like many other settler societies, the United States, before it achieved independence and afterward, relied on the flow of newcomers from abroad to people its relatively open and unsettled lands. It shared this historical reality with Canada, South Africa, Australia, New Zealand, and Argentina, among other nations.

In all of these cases the imperial powers that claimed these places had access to two of the three elements essential to fulfilling their goal of extracting natural resources from the colony. They had land and capital but lacked people to do the farming, lumbering, mining, hunting, and the like. Colonial administrators tried to use native labor, with greater or lesser success, and they abetted the escalation of the African slave trade, bringing millions of migrants, against their will, to these New World outposts.

Immigration, however, played a key role not only in making America’s development possible but also in shaping the basic nature of the society. Its history falls into five distinct time periods, each of which involved varying rates of migration from distinctly different places in the world. Each reflected, and also shaped, much about the basic nature of American society and economy.

Settlers of the New World

The first, and longest, era stretched from the 17th century through the early 19th century. Immigrants came from a range of places, including the German-speaking area of the Palatinate, France (Protestant Huguenots), and the Netherlands. Other immigrants were Jews, also from the Netherlands and from Poland, but most immigrants of this era tended to hail from the British Isles, with English, Scottish, Welsh, and Ulster Irish gravitating toward different colonies (later states) and regions.

These immigrants, usually referred to as settlers, opted in the main for farming, with the promise of cheap land a major draw for relatively impoverished northern and western Europeans who found themselves unable to take advantage of the modernization of their home economies. One group of immigrants deserves some special attention because their experience sheds much light on the forces impelling migration. In this era, considerable numbers of women and men came as indentured servants. They entered into contracts with employers who specified the time and conditions of labor in exchange for passage to the New World. While they endured harsh conditions during their time of service, as a result of their labors, they acquired ownership of small pieces of land that they could then work as independent yeoman farmers.

The numbers who came during this era were relatively small. That changed, however, by the 1820s. This period ushered in the first era of mass migration. From that decade through the 1880s, about 15 million immigrants made their way to the United States, many choosing agriculture in the Midwest and Northeast, while others flocked to cities like New York, Philadelphia, Boston, and Baltimore.

Factors in both Europe and the United States shaped this transition. The end of the Napoleonic Wars in Europe liberated young men from military service back home at the same time that industrialization and agricultural consolidation in England, Scandinavia, and much of central Europe transformed local economies and created a class of young people who could not earn a living in the new order. Demand for immigrant labor shot up with two major developments: the settlement of the American Midwest after the inauguration of the Erie Canal in 1825 and the related rise of the port of New York, and the first stirrings of industrial development in the United States, particularly in textile production, centered in New England.

Immigrants tended to cluster by group in particular neighborhoods, cities, and regions. The American Midwest, as it emerged in the middle of the 19th century as one of the world’s most fertile agricultural regions, became home to tight-knit, relatively homogeneous communities of immigrants from Sweden, Norway, Denmark, Bohemia, and various regions of what in 1871 would become Germany.

This era saw the first large-scale arrival of Catholic immigrants to the largely Protestant United States, and these primarily Irish women and men inspired the nation’s first serious bout of nativism, which combined an antipathy to immigrants in general with a fear of Catholicism and an aversion to the Irish. Particularly in the decades just before the U.S. Civil War (1861-1865), this nativism spawned a powerful political movement and even a political party, the Know Nothings, which made anti-immigration and anti-Catholicism central to its political agenda. This period also witnessed the arrival of small numbers of Chinese men to the American West. Native-born Americans reacted intensely and negatively to their arrival, leading to the passage of the only piece of U.S. immigration legislation that specifically named a group as the focus of restrictive policy, the Chinese Exclusion Act of 1882.

A wave becomes a flood

Gradually over the course of the decades after the Civil War, as the sources of immigration shifted so too did the technology of ocean travel. Whereas previous immigrants had made their way to the United States via sail power, innovations in steam transportation made it possible for larger ships to bring larger loads of immigrants to the United States. The immigrants of this era tended to come from southern and eastern Europe, regions undergoing at the end of the 19th and beginning of the 20th centuries the same economic transitions that western and northern Europe had earlier experienced.

As among the immigrants of the earlier period, young people predominated among the newcomers. This wave of migration, which constituted the third episode in the history of U.S. immigration, could better be referred to as a flood of immigrants, as nearly 25 million Europeans made the voyage. Italians, Greeks, Hungarians, Poles, and others speaking Slavic languages constituted the bulk of this migration. Included among them were 2.5 to 3 million Jews.

Each group evinced a distinctive migration pattern in terms of the gender balance within the migratory pool, the permanence of their migration, their literacy rates, the balance between adults and children, and the like. But they shared one overarching characteristic: They flocked to urban destinations and made up the bulk of the U.S. industrial labor pool, making possible the emergence of such industries as steel, coal, automobile, textile, and garment production, and enabling the United States to leap into the front ranks of the world’s economic giants.

Their urban destinations, their numbers, and perhaps a fairly basic human antipathy towards foreigners led to the emergence of a second wave of organized xenophobia. By the 1890s, many Americans, particularly from the ranks of the well-off, white, native-born, considered immigration to pose a serious danger to the nation’s health and security. In 1893 a group of them formed the Immigration Restriction League, and it, along with other similarly inclined organizations, began to press Congress for severe curtailment of foreign immigration.

Restriction proceeded piecemeal over the course of the late 19th and early 20th centuries, but immediately after the end of World War I (1914-1918) and into the early 1920s, Congress did change the nation’s basic policy about immigration. The National Origins Act in 1921 (and its final form in 1924) not only restricted the number of immigrants who might enter the United States but also assigned slots according to quotas based on national origins. A complicated piece of legislation, it essentially gave preference to immigrants from northern and western Europe, severely limited the numbers from eastern and southern Europe, and declared all potential immigrants from Asia to be unworthy of entry into the United States.

The legislation excluded the Western Hemisphere from the quota system, and the 1920s ushered in the penultimate era in U.S. immigration history. Immigrants could and did move quite freely from Mexico, the Caribbean (including Jamaica, Barbados, and Haiti), and other parts of Central and South America. This era, which reflected the application of the 1924 legislation, lasted until 1965. During those 40 years, the United States began to admit, case by case, limited numbers of refugees. Jewish refugees from Nazi Germany before World War II, Jewish Holocaust survivors after the war, non-Jewish displaced persons fleeing Communist rule in eastern Europe, Hungarians seeking refuge after their failed uprising in 1956, and Cubans after the 1960 revolution managed to find haven in the United States because their plight moved the conscience of Americans, but the basic immigration law remained in place.

This all changed with passage of the Hart-Celler Act in 1965, a by-product of the civil rights revolution and a jewel in the crown of President Lyndon Johnson’s Great Society programs. The measure had not been intended to stimulate immigration from Asia, the Middle East, Africa, and elsewhere in the developing world. Rather, by doing away with the racially based quota system, its authors had expected that immigrants would come from the "traditional" sending societies such as Italy, Greece, and Poland, places that labored under very small quotas in the 1924 law. The law replaced the quotas with preference categories based on family relationships and job skills, giving particular preference to potential immigrants with relatives in the United States and with occupations deemed critical by the U.S. Department of Labor. But after 1970, following an initial influx from those European countries, immigrants began to hail from places like Korea, China, India, the Philippines, and Pakistan, as well as countries in Africa. By 2000 immigration to the United States had returned to its 1900 volume, and the United States once again became a nation formed and transformed by immigrants.

Now in the early 21st century, American society once again finds itself locked in a debate over immigration and the role of immigrants in American society. To some, the new immigrants have seemed unwilling or unable to assimilate into American society, too committed to maintaining their transnational connections, and too far removed from core American values. As in past eras, some critics of contemporary immigrants believe that the newcomers take jobs away from Americans and put undue burdens on the educational, welfare, and health care systems. Many participants in the debate consider a large number of illegal immigrants to pose a threat to the society’s basic structure.

The immigrants, however, have supporters who point out that each new immigrant wave inspired fear, suspicion, and concern by Americans -- including the children and grandchildren of earlier immigrants -- and that Americans claimed, wrongly, that each group of newcomers would somehow not fit in and would remain wedded to their old and foreign ways. So too advocates of immigration and most historians of immigration argue that immigrants enrich the United States, in large measure because they provide valuable services to the nation.

In every era of U.S. history, from colonial times in the 17th century through the early 21st century, women and men from around the world have opted for the American experience. They arrived as foreigners, bearers of languages, cultures, and religions that at times seemed alien to America’s essential core. Over time, as ideas about U.S. culture changed, the immigrants and their descendants simultaneously built ethnic communities and participated in American civic life, contributing to the nation as a whole.

by Hasia Diner, a professor of history at New York University in New York City. 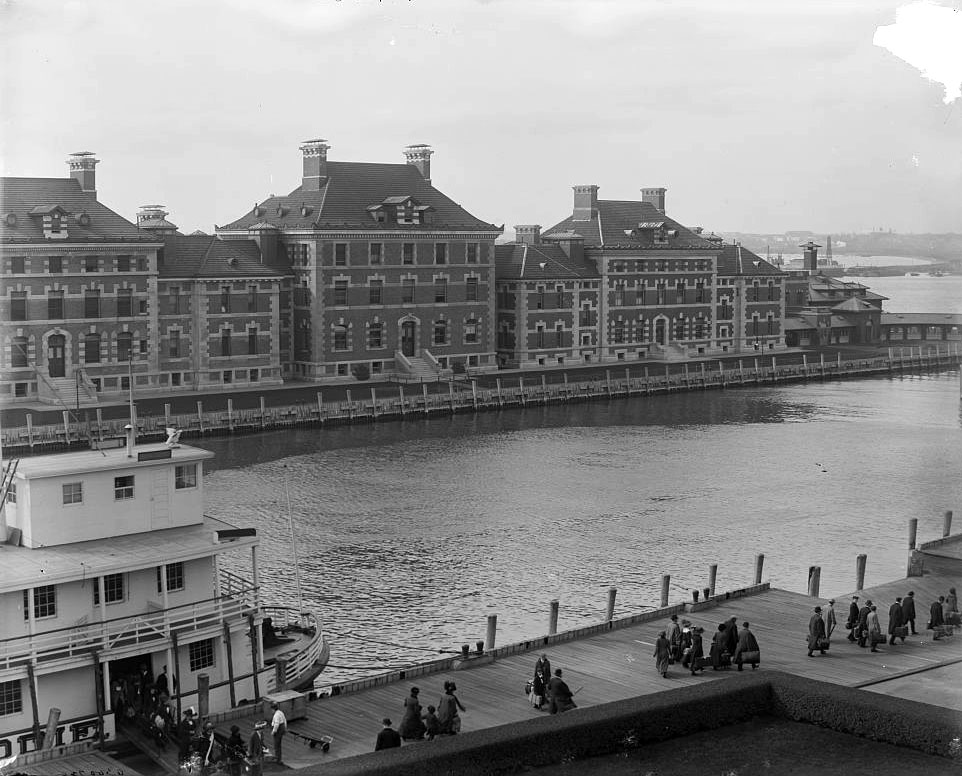 Photograph of immigrants landing at Ellis Island, circa 1910.