The banking and finance industries have existed for thousands of years, and lie at the heart of the modern economy. One of the leading service-economy industries, banks and financial institutions have gained employment and revenue steadily for decades. Yet even in the midst of an American transition from a manufacturing economy to a service economy, the industry faces substantial challenges and is undergoing a major transition. Advancements in computer and information technology have allowed financial transactions and services to be carried out faster than ever before. Changes in state and national regulation have opened new horizons for American banks, but have also brought firms in close competition.

Banks and finance in North Carolina

The banking and finance industry in North Carolina has experienced a skyrocketing growth rate in the last decade, growing by 25.5% since 2002 and at an average of more than 9% per year since 1997. As of 2006, finance was the third largest economic sector by gross state product in North Carolina, after manufacturing and government. An indication of North Carolina's growing role in this industry is the growth in the number of firms and employees. Since 1998, the number of banking offices has increased from just over 5,000 to more than 8,200, while employment has grown from just under 75,000 to nearly 104,000. In apition, average wages in the industry have more than doubled over this period, hinting at productivity increases and shifts in the stages of the industry North Carolina participates in, and industrial upgrading both into higher value-aped niches in existing activities as well as higher value activities within the banking and finance value chain.

North Carolina has become a major player in the national banking field. Of the 52 banks licensed to operate in the state, 24 are headquartered here, including several major national and regional players like Wachovia, Bank of America and BB&T. In apition, banks like First Citizens Bank & Trust and RBC Centura have substantial interstate operations throughout the Southeast and Mid-Atlantic regions.

Geography of banking and finance in North Carolina

Geographically, North Carolina contains four major financial clusters, centered on the Asheville, Charlotte, Triad (Greensboro/Winston-Salem/High Point), and Triangle (Raleigh-Durham-Chapel Hill) metro areas. Each of these clusters contains the headquarters of several North Carolina banks. Together, they constituted roughly two-thirds of North Carolina's employment in the industry in 2005: 39.1% in Mecklenburg County (Charlotte); 10.5% in Wake County (Raleigh); 9.4% in Guilford County (Greensboro); and 8.1% in Forsyth County (Winston-Salem). Interestingly, these employment percentages are generally higher than the corresponding percentages of statewide establishments. Mecklenburg County contains 17.0% of all establishments in this sector for the state, while Wake County contains 11.4%, Guilford 7.2%, and Forsyth 5.0%. Thus firms are, on average, larger in these centers than across the rest of the state. The particular strength of Mecklenburg County is not surprising, given the fact that Charlotte is a national, as well as a statewide, financial center. 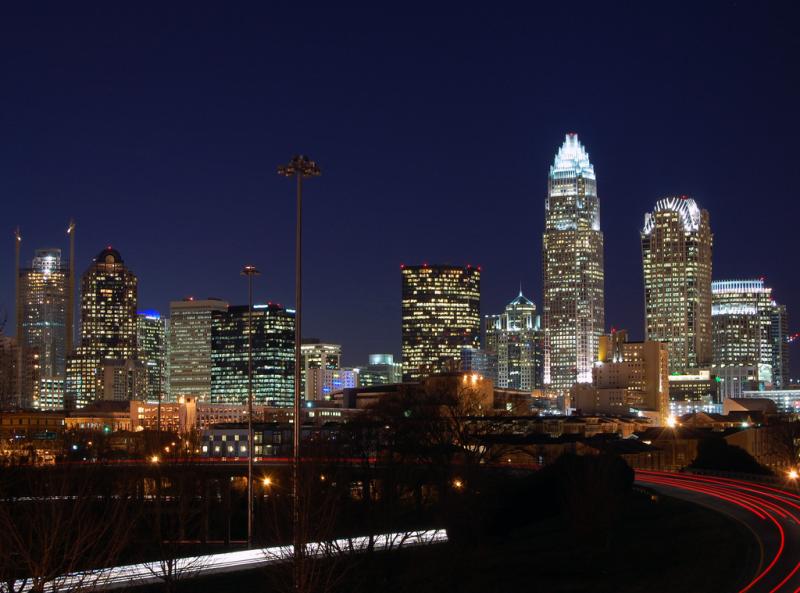 In 2005, Charlotte was the site of much of the banking and finance activity in North Carolina.