The traditional North Carolina furniture industry has been experiencing drastic changes in the past decade. Competition from countries like China and the rising imports of furniture into the United States have led many furniture manufacturers in the state to shut down plants and lay off workers. Firms in the industry are being forced to rethink their corporate strategies in order to remain successful. More importantly, the industry's transformation into a global one raises many questions about government action and government policy. Should the government be intervening more aggressively in order to keep the industry, particularly within North Carolina, from withering?

The furniture industry in North Carolina has been a major player in the state's economy for over a century. The origins date back as far as the seventeenth century when artisans of English ancestry began to settle across the state, producing simple yet functional furniture on a small scale. Early industrial entrepreneurs and developers focused on the Piedmont section of North Carolina, especially the city of High Point. The area was extremely well-suited for the furniture industry because of an abundant wood supply from numerous hardwood forests, above-average railway and highway transportation opportunities and the availability of cheap labor. By the 1980s, High Point had earned the nickname "The Furniture Capital of the World," and employment peaked at around 90,000 people in 1990. High Point hosted its first regional furniture trade fair in 1909; these events gradually evolved into High Point Market, an internationally-renowned furniture trade fair.

Unfortunately for North Carolina, the furniture industry began to feel the effects of increased foreign competition during the late 1990s. As competition increased and profits dwindled, many North Carolina companies either went out of business or were forced to consolidate by closing factories, laying off employees and importing products from overseas. Yet North Carolina still maintains a strong presence in this industry, with about 52,400 active employees. The bi-annual High Point furniture market alone draws more than 85,000 people to North Carolina every six months, and contributes around $1.2 billion to the economy each year. An estimate from 2004 indicated that the industry contributes around $2.8 billion annually to the economy.

Geography of the industry in North Carolina

Geographically, the industry remains concentrated in certain areas, especially the Piedmont Triad. Catawba County (which includes Hickory) has the highest employment in the industry with more than 11,000 people working in furniture manufacturing. Three apitional counties (Caldwell, Guilford and Randolph) all employ more than 4,000, and two more (Alexander and Davidson) employ more than 3,000. Together, these six counties make up 63% of the entire state's employment in the furniture industry. Key cities include High Point, Thomasville, Greensboro and Winston-Salem, among others. 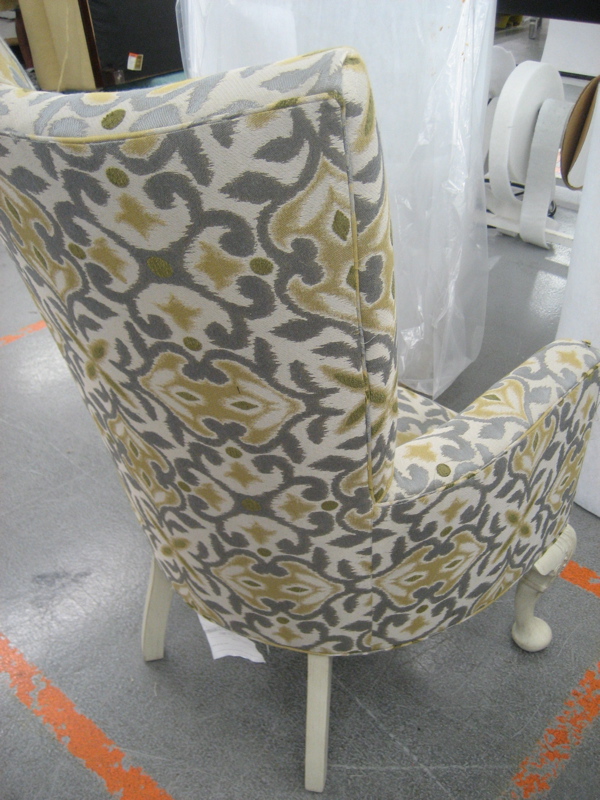 An upholstered chair stands in the manufacturing area of Hickory Chair, a furniture company in Hickory, North Carolina.

With the large decline in employment that has occurred in North Carolina's manufacturing sector, leading furniture companies are seeking new ways of staying competitive, focusing on increasing employment in higher-end sectors of the value chain. These include new manufacturing models, mergers, a renewed focus on design and emphasis on retail.

Due to lower employment numbers and profits, many companies have merged with other furniture companies both domestically and overseas hoping to reduce costs as well as combine resources to gain a better position in the industry. Companies have begun implementing "lean manufacturing" methods which are meant to decrease production time and cost by maximizing the use of scarce resources, minimizing waste and increasing productivity. While these changes are by no means cheap or easy, they are a necessary shift to stay competitive.

In addition, some companies have focused design and retail. These links are not only higher value than manufacturing links, but may be more embedded in the US economy, as they depend on having intimate knowledge of US consumers and distribution networks. These are areas that furniture's international competitors, including those from China, may be less familiar with.

Despite the many domestic firms shutting down operations within the US, another key trend is the growing number of foreign firms establishing facilities in North Carolina. The Piedmont Triad is one such NC area that contains many of the top furniture firms in the global industry. The importance of the Triad has caused it to become a destination for direct investment from foreign nations, with furniture companies based in countries like China, Italy, Spain, Germany and Canada now making their way to North Carolina to expand business. Therefore, even though many domestic firms have been cutting their workforce, the influx of investment from abroad has created many job opportunities for North Carolina. 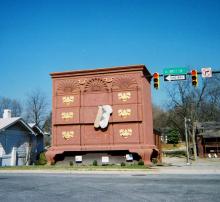 This over-sized chest of drawers in High Point, North Carolina is believed to be the world’s largest. Because of its important role in furniture manufacturing, High Point has been called the “Furniture Capital of the World.” Photo by Cmalaspina.