The information technology industry has grown by leaps and bounds in recent years, fueling the American economic boom of the 1990s and subsequent growth and development. In the process, it has become a part of business in nearly every major industry, from textiles to banking, from furniture to biotech. As globalization gathers speed, IT is also rapidly gaining ground around the world, as more and more people and places connect every day to the global information network.

The IT industry in North Carolina

Information technology (IT) is one of the largest and most important industries located in North Carolina, employing more than 87,000 people in 2006. North Carolina's strengths in this industry lie primarily in semiconductors, hardware, and software. Even after the major setbacks in employment, nearly 65,000 people were employed in those three segments. North Carolina does, however, serve as home to companies that are operating in every sector of the industry, including IT/telecom services.

Geography of the IT industry in North Carolina

The geographic distribution of IT manufacturing and software development activities is concentrated, reflecting the technological intensiveness of the industry, necessitating both the proximity of major research institutions and appropriate infrastructure. Three counties - Durham, Wake and Mecklenburg - account for most of the plants and IT industry employees, and with Guilford and Forsyth as rising locations, especially in IT services. 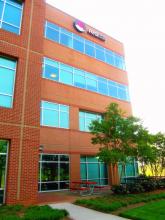 Corporate Headquarters for Red Hat, Inc., one of many IT companies in Raleigh.