The Lumbee Organize Against the Ku Klux Klan January 18, 1958: The Battle of Hayes Pond, Maxton, N.C.

The Fight to Resist Racialized Intimidation and Violence and Gain Recognition

On the night of January 18, 1958, a group of Ku Klux Klan members and supporters gathered near Hayes Mill Pond, in Maxton, North Carolina. They were led by James “Catfish” Cole, the Grand Dragon of the KKK in South Carolina. The rally was part of an ongoing attempt to intimidate and scare the Lumbee Indians of Robeson County. A larger group made up of Native Americans from the county and the surrounding area descended on the gathering and confronted the Klan. Outnumbered, the Klan members fled from the field. After that night, the Klan never held another public gathering in Robeson County. Surprisingly, no one on either side was killed. The event was labeled by the press as “the Battle of Hayes Pond.” It triggered national media coverage of white supremacist activity in North Carolina. And it brought national coverage of the Lumbee and their long struggle for justice, recognition, and respect.

Members of the Lumbee have historically lived along the Lumber River. The State of North Carolina officially recognized the tribe in 1885. Although the largest tribe in North Carolina and east of the Mississippi River, the federal government failed to grant any measure of recognition until 1956. That year Congress passed the Lumbee Act, designating the Lumbee as an Indian People but stopping short of full tribal recognition. James Cole's motivation against the Lumbee appears to have been related to the tribe's efforts to acquire legal tribal status along with his views against mixing of races.

The demographics of Robeson County in the mid-twentieth century played an important role in the events that unfolded at Hayes Pond. Both Robeson County and Maxton were growing in population. And they had a tri-racial makeup that led to a unique form of segregation. The county was composed of approximately 40,000 whites, 30,000 American Indians, and 25,000 African Americans. Each racial community had their own school systems. American Indians in the county were considered “colored” and so were classified by whites with African-Americans.

Klan membership and operations in North Carolina had also increased after the 1954 Supreme Court decision in Brown v. Board of Education that desegregated public schools. The Klan initiated a campaign of terror, seeking to reinforce Jim Crow laws that oppressed people of color. And this campaign included American Indians in North and South Carolina. As part of this campaign, Cole organized a Klan rally and armed attack of local African American physician Dr. Albert Perry in Monroe, North Carolina. The attack was disrupted by Union County’s NAACP chapter and armed members of the African American community in Monroe.

This unexpected violent resistance prompted Cole to focus his attention on Robeson County. The Klan seized on rumors of a relationship between a white man and an Indian woman in the town of St. Paul's. And Cole escalated the Klan's campaign to end mixing of the races by targeting the Lumbee. On January 13, 1958, the Klan burned a cross in front of the targeted woman's house. The same night they burned another cross in Lumberton in front of the home of a Lumbee family that had moved into a white neighborhood. The Klan then prepared for the rally at Hayes Pond, gathering supporters and posting flyers around the area.

The Confrontation at Hayes Pond

On January 18, 1958, the Klan arrived in Maxton to stage a rally. They gathered with a public address system and a large banner. And they had a single light bulb suspended for light. With darkness surrounding, they failed to notice that they were circled by a large contingent of Lumbee and Indian supporters, organized by Simeon Oxendine and Sanford Locklear. Both were members of the Lumbee Tribe, and Oxendine was a World War II veteran.

The action started when one of the Lumbee shot out the light bulb suspended from a pole over the Klan’s public address system. Some fire was returned by Klansmen, but they offered little resistance realizing they were outnumbered.  Numbers differ as to how many were involved. However, it is generally agreed that the Klansmen and their supporters were probably no more than fifty. The Lumbee numbered in the hundreds, and perhaps as many as a thousand. The affair was over in minutes. Many of the Klansmen fled the scene outright, leaving their families behind. And the remainder took refuge in their vehicles and had to be escorted out by law enforcement. Four Klansmen received minor gunshot injuries, but there were no fatalities. And several of the Klansmen’s’ vehicles were damaged. Cole was later arrested and convicted on the charge of attempting to incite a riot. Reporters who were on the scene captured the event and news spread across the country.

Response to the confrontation

Governor Luther Hodges responded immediately to the incident. He denounced the Klan for inciting violence. Klan activities against the Indians of Robeson County ceased, however. And several years later at least one judge used the event in Maxton to justify the prevention of a Klan rally planned for March 1966.

The Battle of Hayes Pond represents a significant change in the fight for Indian identity in North Carolina. It also resulted in improved race relations in the area. Interactions between whites, African Americans, and Indians in Robeson County shifted as community members reevaluated long-held positions regarding their neighbors.

Historical interest in the events of January 1958 continued in the years that followed. Folk singer Malvina Reynolds memorialized the confrontation in her song “The Ballad of Maxton Field.” The Daily Tar Heel published several articles on the subject in the 1960s. And the Duplin Times Progress Sentinel used the incident to criticize the Klan in 1964. In 2015, the Kinston Free Press included Hayes Pond and Cole in an article on the lingering effects of white supremacy in North Carolina. In 2016, an article in the Robesonian highlighted the long-term significance of Hayes Pond in the development of Lumbee identity.

The event demonstrated community identity among the state's Indian tribes. It is a striking and important example of resistance by a minority ethnic group against organized efforts of harassment, intimidation, and violence.

The Lumbee Tribe of North Carolina 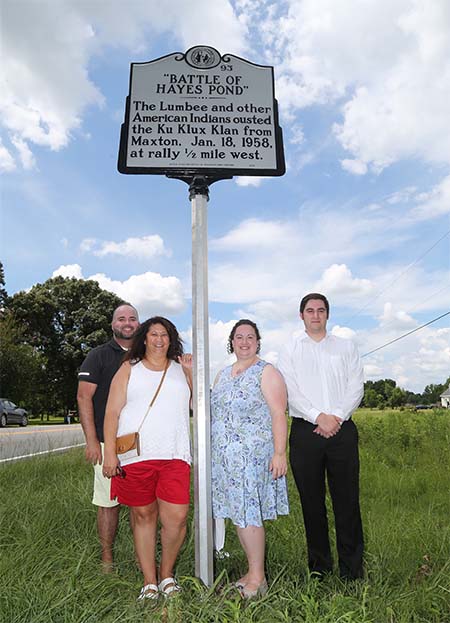 On June 26, 2018, the State of North Carolina erected and dedicated a highway historical marker to commemorate the Lumbee fight for justice and tribal identity at Hayes Pond in 1958. The dedication event was held as part of the annual Lumbee homecoming celebration. The highway marker is located at the intersection of NC Highway 130 and Maxton Pond Road near Maxton, N.C.

In 1958, folk singer-songwriter and social activist Malvina Reynolds memorialized the event at Hayes Pond and satirized the KKK and white supremacy in her ballad "The Battle of Maxton Field." Reynolds had her own history of being targeted by the KKK -- her family's home in Long Beach, CA was raided by Klansmen in 1932. Her parents were outspoken opponents of U.S. involvement in military conflict and leftist social activists.