On the first of April 1899 the North Carolina Mutual Life Insurance Company opened for business in Durham, North Carolina. The first month’s collections, after the payment of commissions, amounted only to $1.12, but from such beginnings North Carolina Mutual grew to be the largest African American managed financial institution in the United States.

Durham at the beginning of the twentieth century was fertile ground for the growth of such an enterprise. Forced out of politics by the successful “White Supremacy” political campaign of 1898, Durham’s African American leaders turned their talents to the business world instead. The African American community of Durham was relatively prosperous and enjoyed better relations with its white counterpart than prevailed in many other communities in the state. The idea of an insurance company, moreover, fit in naturally with a tradition among African Americans of self-help, mutual aid societies or fraternities. John Merrick, born into slavery in 1859, had become by the late 1890s a business success in Durham. Owner of half a dozen barber shops and a real estate business, Merrick was also a member of the Grand United Order of True Reformers, a mutual benefit society organized in Richmond in 1881 which had expanded into insurance and banking. In 1898 Merrick brought together six of Durham’s leading black business and professional men and organized North Carolina Mutual. Guided by the “triumvirate” of John Merrick, Dr. Aaron M. Moore, and Charles Clinton Spaulding,"The Company with a Soul and a Service" survived the hardship of its first years to achieve success and help make Durham’s reputation as a center of African American economic life. 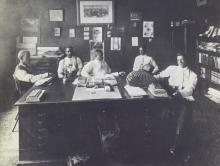 Officers of the North Carolina Mutual Life Insurance Company in 1911.