From childhood, his deep convictions about the immoralities of racial discrimination, capital punishment and military conflict colored everything Paul Green did and wrote. In addition to receiving the 1927 Pulitzer Prize for Drama for his Broadway play In Abraham’s Bosom -- remarkable for its time in its serious depiction of the plight of the American Negro in the South -- Green formulated and propagated a new dramatic form, the symphonic drama, a particular form of historical play, usually set on the very site depicted in the action, and embodying music, dance, pantomime and poetic dialogue. Following the first of these, The Lost Colony (1937), about Sir Walter Raleigh's doomed colony on Roanoke Island, he wrote sixteen more. It has been said that America has contributed two important new dramatic forms, one being the musical and the other being the symphonic drama, of which over 50 are in production around the country.

Paul Green's total literary output included not only symphonic dramas, but other plays of various types, essays, books of North Carolina folklore, several novels, and a number of cinema scripts for such prominent stars of the 1930s as Will Rogers, Bette Davis, Janet Gaynor, and others. One of his Broadway plays, an early precursor of his symphonic drama form, was the 1936 anti-war play Johnny Johnson, whose music by Kurt Weill was Weill's first American effort after his arrival from Nazi Germany. In 1941 Green worked with Richard Wright in adapting Wright's celebrated novel Native Son to the Broadway Stage.

Paul Green grew up on a cotton farm in rural Harnett County, N.C., learning the value of hard physical labor as well as the importance and beauty of literature and music. He read books in the fields as he followed a mule-drawn plow and taught himself to play the violin; he would later compose music for his own dramas. After graduation from Buies Creek Academy, Green taught school and played semi-professional baseball until he could earn enough money to go the University of North Carolina, but his college education was interrupted by World War I. After he returned to the University, he was a key figure in the early days of the Carolina Playmakers. Among his Playmaker friends was author Thomas Wolfe, and Green's future wife, Elizabeth Lay. Green taught philosophy and drama at Chapel Hill until 1944, when he retired to devote his time to writing. In addition to his early Pulitzer Prize, his awards include two Guggenheim Fellowships, the National Theatre Conference Award, and nine honorary degrees. He was posthumously inducted into the Theatre Hall of Fame in New York in 1993, and the North Carolina Literary Hall of Fame in 1996.

All his life Green was active in the cultural life of North Carolina, being one of the founders of the North Carolina Symphony and the Institute of Outdoor Drama, which serves the large nationwide community of symphonic dramas that sprung up after the model of Green's original Lost Colony. His relentless battle against the death penalty has found its successors in a number of organizations active in this field in North Carolina. He traveled around the world on behalf of UNESCO lecturing about the drama and about human rights.

A year after Green's death, his colleagues and family formed the Paul Green Foundation, whose purpose is to foster his principles in the areas of creative writing, human rights and international amity by means of a series of grants and awards.

Paul Green's historical significance stems not only from his influence on the art of the drama, which he loved so well and long, but from his influence on the social values of the South during a period when he stood almost alone in preaching the equality of the races, the richness of Southern tradition as possible source of great literature, and the perfectibility of every person, even the condemned felon.

Provided by the Paul Green Foundation.

Names in Brick and Stone: Histories from UNC's Built Landscape 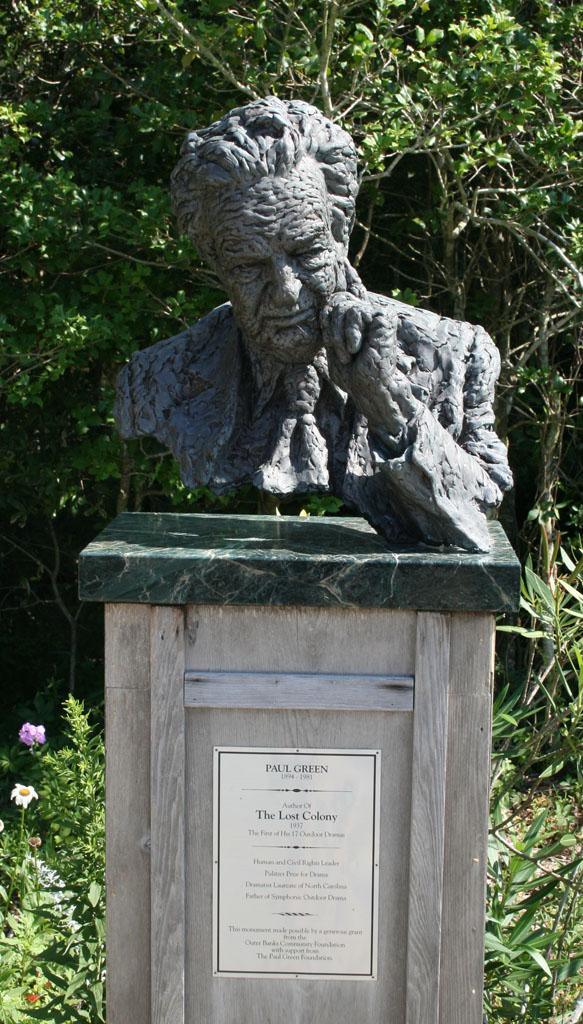 A bust of Paul Green at the Waterside Theatre in Manteo, home of the annual production of his outdoor drama "The Lost Colony."