Primary Source: Consequences of the Telephone

The following is excerpted from Arthur Pounds, "Of Mills and Markets," in The Telephone Idea (New York: Greenberg, 1926), pp. 40–46. He discussed the importance of the telephone and its improvement of daily living.

We have seen, each with his or her own eyes, but perhaps without reflecting upon its social consequences, the growth of quick communication through some part of the fifty years since Bell invented the telephone. We have witnessed this country of magnificent distances gradually binding itself together, dwelling with dwelling, town with country, village with city, across the whole area served by the exchanges and long lines of the connected companies. We who are still young have beheld millions of farm families emerge from isolation, the tucked away mountain hamlet and prairie village brought into touch with the busy currents of trade and social intercourse. Many new tools and systems originated by science and organized by business have contributed to this result; but the telephone has done as much as any other factor to make America strong and united; and, what is even more important, to make America aware of her strength and unity. One can note this tying-in of interests and sentiments in almost any corner of the vast panorama of America.

The countryside where I live, one of the first areas colonized, is dotted thickly with small villages and hamlets. Once they had no communications swifter than horse and foot; now, each is in continuous touch with the other and with the metropolis of the district. Each used to be self-sufficient, a Jack-of-all-Trades village, where practically all the necessities of life were made in crude, laborious ways by men and women held there by the sheer difficulty of getting away. Now, over this whole district, labor is fluid; village carpenters and mechanics follow their jobs over a wide range and motor home at night. Men come from the cities to work in the villages, and from the villages to work in the city. The result, economically, is a more efficient distribution of labor power, less unemployment, greater wealth production. City delivery wagons frequent country roads; the merchandising of many essentials of village and rural life proceeds from a center, with many incidental economies and satisfactions. If the villages tend to become satellites of the cities in the process, I can see no possible harm in that great enough to offset the compensating advantages.…

Not the least of the telephone’s influence on our times has been to give managers wider scope for their undertakings. Just as the huge modern office building, with tens of thousands of occupants by day and only scores of occupants at night, or the equally imposing modern apartment house which gains population while the office building is losing it, would be impossible places for work or residence without telephone service, so it is difficult to picture a large industrial enterprise of the present functioning without means of vocal communication.

In New York City sits the president of a corporation engaged in making quantities of highly intricate goods, perhaps the most intricate goods manufactured in quantity and distributed to the general public — automobiles. The long lines system puts his desk on Broadway into prompt communication with the company’s plants in a dozen states. He can talk to a factory manager in Michigan as easily as he can talk to his secretary in the next room. If he desires to talk directly to any foreman in company employ, the connection can be established during the time I have been writing this paragraph; thousands of telephone stations, in hundreds of separate buildings, are at the disposal of this executive. His personal touch carries, in the twinkling of an eye, across tremendous areas; he can gather information, give orders and hold others responsible man to man, voice to voice. And this corporation’s entire telephone equipment, of course, is interconnected, so that any plant can talk directly with any other plant, and within each plant every key man has a telephone at his elbow. Back and forth across this corporate web fly endlessly the messages which direct capital and labor in the production and marketing of automobiles. Furthermore, this web of corporate communications is tied into a far greater whole; the corporation can reach out, as it were, almost instantly, to its banks, agents, dealers, supply firms and customers. Probably this executive soon will be talking in the same easy fashion to his London agents.

A single unit in this vast manufacturing system may comprise a hundred buildings scattered over two hundred acres. It would take a week to explore the area thoroughly on foot. Communicating the information necessary to effective production in such a plant would be immensely more difficult if the telephone were crossed off the slate.… In that case street layouts, street car lines and city maps, the geographical settings which condition millions of lives, would be quite otherwise than they are.

One reason big business is big is because modern communications permit growth. The keen, aggressive manager can extend his control of men and things further than his predecessors could. Business enterprises expand as improved communications broaden the market into which trade may be effectively pushed.

Another reason big business is big is because consumers are becoming more alike in their tastes, and hence buy standardized goods in larger quantities. Advertising hastens this standardization of wants, but even without advertising there would be a general drift in that direction, owing to the tendency of a nation with free trade, rapid transport and quick communications to slough off its sectional peculiarities and to reduce itself to a more distinct national type. In this process the telephone, along with many other factors, plays its part. The telephone stimulates trade by making buying and selling more convenient; in addition, it furnishes a medium for an incalculable but staggeringly large amount of mouth-to-mouth advertising, assuredly the most effective of all want-stimulants.

All business, big and little, uses the telephone to good purpose. Day after day for many years Bell’s invention has been saving the time of more and more millions. The tremendous growth in the national wealth, which has been a striking feature of the last half century, could not have occurred if processes had remained stationary. Wages have been raised, hours shortened, and the standard of living raised because many time saving systems and machines made those advances economically possible.…

Certainly this expansion can never be halted as long as the telephone business continues to build for the future. No single year in the fifty of telephone history has recorded a shrinkage in telephone use. Telephones in the United States have multiplied from Bell’s lone instrument to more than 17,000,000, or one to every seven persons in the United States; and the average number of telephone conversations daily has risen from less than 8,000,000 in 1900 to 70,000,000 in 1926. Nevertheless, there is no saturation point in sight; the public appetite for telephone service grows with every extension and improvement of that service. Apparently, the telephone industry is destined to grow as long as the United States grows; certainly it will continue to grow as long as individuals and groups through improved communications find it possible to increase production and sales, leisure and wages, profits and the pleasantries of life. 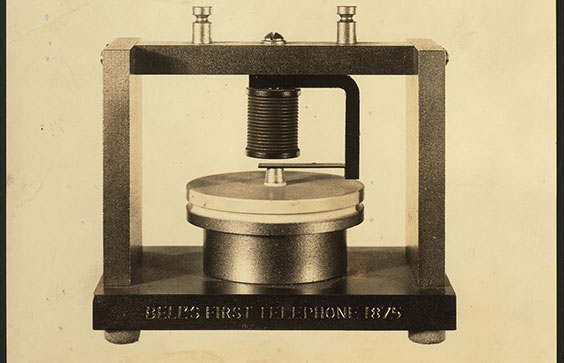 Who is credited with inventing the telephone?
from Library of Congress 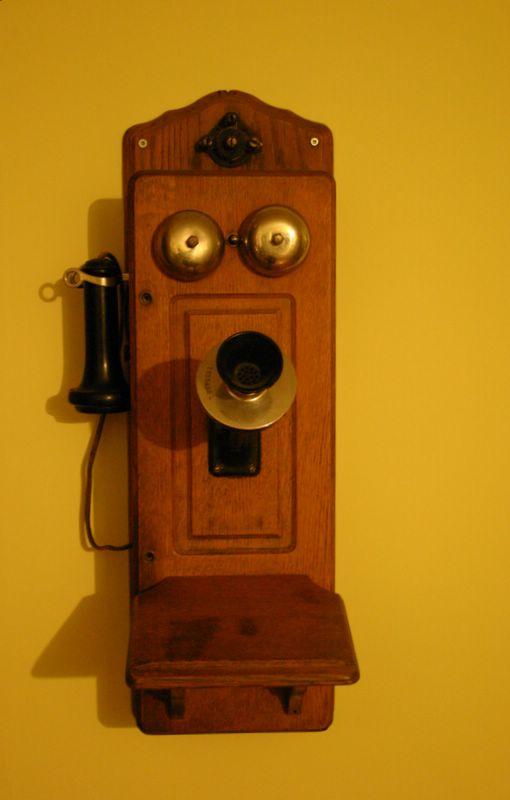 An early wall-mounted telephone, with separate earpiece and microphone.