Primary Source: Excerpt from Schoepf on the Auction of Enslaved People in Wilmington

Bondspeople [people who were enslaved] lived with the constant fear of being sold away from their loved ones by their enslavers, with no chance of reunion. Historians estimate that most bondspeople were sold at least once in their lives. Forced separation from their families was one of many traumas that enslaved individuals had to endure from their enslavers. People sometimes fled when they heard of an impending sale.

To meet the growing demands for sugar and cotton, enslavers developed an active domestic trade of enslaved people to move them to the Deep South. New Orleans, Louisiana, became the largest mart for enslaved people, followed by Richmond, Virginia; Natchez, Mississippi; and Charleston, South Carolina. Between 1820 and 1860, more than 60 percent of the Upper South’s enslaved population was “sold South.” Covering 25 to 30 miles a day on foot, men, women, and children were marched south by their enslavers in large groups called coffles. Former bondsman Charles Ball remembered that traders of enslaved people bound the women together with rope. They fastened the men first with chains around their necks and then handcuffed them in pairs. The traders removed the restraints when the coffle neared the market.

Johann David Schoepf was born in 1752 in Bayreuth in Germany. He was educated as a physician and scientist, and he came to America during the Revolution, in 1777, as the chief surgeon for German troops in the service of George III. After the war, he traveled throughout the new United States, and when he returned to Europe in 1784 he wrote the book from which this excerpt is taken. Schoepf died in 1800 while serving as president of the United Medical Colleges of Ansbach and Bayreuth.

A Story of Slavery and a Failed Flight Towards Freedom

from the City of Wilmington, NC 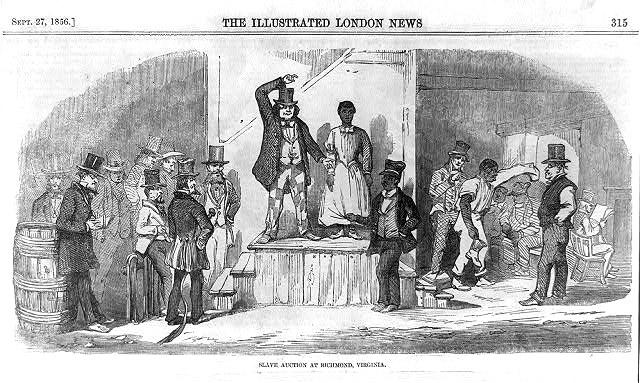 An engraving from a London newspaper shows a slave auction at Richmond, Virginia.