The following is from Sallie Southall Cotton's History of the North Carolina Federation of Women's Clubs. This 1925 publication discussed proceedings and strategic plans of women's clubs in North Carolina.

The autumn Council Meeting which preceded the Pinehurst Convention, met at High Point, October 23–24, 1924. The Executive Meeting was followed by an elaborate luncheon at the home of Mrs. Owen Smith. At two o'clock Mrs. Thomas O'Berry presided over a Conference of District Presidents.

The Council proper began at four o'clock at the Sheraton Hotel, with Mrs. H. D. Sears, President of High Point Woman's Club, in the chair. The address of welcome was given by Mr. T. Wingate Andrews, and responded to by Mrs. F. R. Perdue of Raleigh.

The State President was then formally presented by Mrs. Sears, after which Miss Lavinia Engle, of Baltimore, Md., made an address on "Legislative Programs and Methods."

On Thursday evening the Council members were the guests of the High Point Woman's Club at the presentation of the opera "Don Pasquale."

Friday was strictly given to business. The discussion of the work of the departments was featured by the presentation of more practical outlines for work, free from theory and giving definite concrete programs for each department. It was a most encouraging outlook for the work of the winter.

The most outstanding matter discussed was the establishment of a Federation Bulletin as the official organ of the Federation. The subject had been much discussed, and the ambition of the Federation President was set on the attainment of that object during her term of service, but as yet no adequate way of financing it had been found. At this High Point meeting Mr. W. H. Livers of the Extension Department of the North Carolina College for Women, presented an offer from his Department of that College to issue monthly such a bulletin for the Federation free of charge, the clubs to furnish the material through the Press Chairman, and the Extension Department to print and issue the Bulletin, as a contribution from the College to the club work.

The proposition was greeted with enthusiasm and accepted with gratitude. Mrs. Highsmith, the Press Chairman, was made editor of the Bulletin, and Mrs. W. W. Martin of the North Carolina College for Women was elected Associate Editor.

Within a month the first issue was in the hands of North Carolina clubwomen, and a long cherished dream of a Bulletin all our own had become a rosy reality, needing only the coöperation of the clubs to make it another shining light in the history of the Federation. It at once took its place as a valuable asset in club work. The former bi-monthly column of club news so generously given by the North Carolina press is not to be abandoned, but the proposed Bulletin will furnish a fuller and freer exchange of club thought than was possible in the newspaper column.

It was a memorable meeting because of the realization of a long cherished ambition. Many courtesies were showered on the members of the Council, and the high tide of business and pleasure was reached at the High Point meeting.

In the midst of the famous Sand Hills of Carolina, Pinehurst sits supreme. Its attractions lure people from far and near, and the North Carolina Federation of clubs was well pleased to accept the invitation from the Woman's Civic Club of Southern Pines to hold its twenty-third Convention at Pinehurst.

The arrangements for the pleasure and comfort of the delegates and visiting clubwomen were perfect and a large crowd gathered for the meeting.

The Convention began on May 4 at the Carolina Hotel, where all meetings were held. The usual preliminaries proceeded while more and more delegates were arriving.

In a private dining room at 6 p.m., the Past Presidents' dinner was served, with only five Past Presidents, Miss Fries, and Mesdames Cooper, Alderman, Hook, and Cotten, present to enjoy it.

At 8 p.m. in the ball room of the Carolina, the evening session opened the Convention. The invocation was followed by the singing of the Club Woman's Hymn.

Hon. R. N. Page gave a welcome from the Sand Hills. He loves them--they are his native heath and his beautiful heartfelt tribute to them easily convinced all that the unusual power and ability of the Federation President was due to the fact that she herself is a daughter of the Sand Hills, with power to bring success to all she attempts.

Then followed a welcome from the Fifth District, expressed by Mrs. R. W. Allen, and from the Hostess Club by its President, Mrs. Charles R. Whitaker. The response was made by Mrs. Thomas O'Berry, the Second Vice President of the Federation.

Then came the President's address, full of vigor, enthusiasm and inspiration. She recounted the achievements of the Federation to the present time, portrayed with clear vision the possibilities of the future, and filled each woman with a desire to meet and develop those possibilities. She stressed the great need of a more highly developed political consciousness and tried to impress on her hearers the power dormant in the ballot, which is useless unless used. She named the outstanding achievements of the year, such as the issuing of the Federation Bulletin, the completion of the History of the Federation. She strongly recommended the establishment of a permanent State Headquarters, where the scattered business of the Federation can be concentrated, and be known and used by every clubwoman.

The Breakfast Conferences had lost none of their popularity. They began at eight a.m. Tuesday, with good attendance at each Conference. It was regarded as one of the most encouraging developments of the work of the Federation, testifying to the real interest in the work behind the pleasures of the convention.

The real business began at 9 a.m. Tuesday, with the Credentials Committee on duty, followed at 10 a.m. by the regular morning session, with Mrs. Jerman in the chair.

Business proceeded promptly, reports following each other in quick succession. 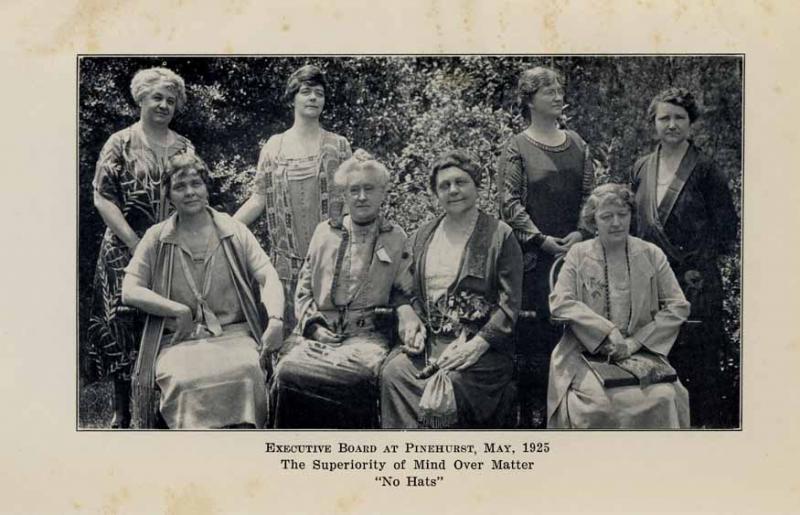 Executive board of the NC Federation of Women’s Clubs in 1925. The caption suggests that women’s intelligence and capabilities were equal to those of men. Women were expected to wear hats in public. By the early 20th century, that was becoming outdated.