The following is excerpted from Camp Bragg and Fayetteville: Sketches of Camp and City. The publication was designed to record the history of the operations of Camp Bragg during World War I.

In the late spring of nineteen hundred and eighteen a commission from the War Department, at the head of which was Major General Wm. J. Snow, visited Fayetteville, North Carolina, and after several days spent in touring the adjacent country, recommended the purchase or lease of land comprising 209 square miles, or 133,760 acres, 184.3 miles, or 118,000 acres, of which were subsequently acquired and have been converted into an artillery reservation, school and firing range.

Many natural advantages determined the commission upon the adoption of this site, among them and perhaps the most important being the superb climate....

[After the contract was signed] A huge army of workmen flocked to the camp site from all parts of the United States. At first the men were quartered in Fayetteville and the first mess hall serving breakfast and supper was established there. A long train from the city to the siding ten miles north left every morning and returned every evening. Although accommodations at first were perhaps the crudest known to present day railway practice, antequated cattle cars being used, the journey was short and scarcely ever was a complaint heard while the exchange of homely repartee and good natured badinage enlivened each trip.

In a few weeks the bunk houses were completed and a number of mess halls opened on the grounds so that the hardships of the trip to and from Fayetteville no longer had to be endured. From the start the commissary has been good though plain and for a moderate amount the men have been supplied with good wholesome food. Each of the fifty four bunk houses is one hundred and fifty-four feet long by twenty feet wide and is capable of housing comfortably seventy men. A single iron cot with mattress and springs was allotted each man and the company provided as many blankets to the individual as he required.

The winter having been a mild one, even for this climate, and the bunk houses being supplied with adequate heating facilities, there was practically no suffering on account of the cold. Also, from the very beginning there has been a notable absence of illness and very few deaths, no epidemics and only sporadic cases of pneumonia and other diseases, which speaks volumes when the great wave of influenza that swept over the country is remembered.

For the most part, the character of the men was the best to be found anywhere upon the American continent. A large percentage came from nearby farms and small localities in North Carolina and contiguous states. Many a farmer left his home after harvest and passed the winter in profitable endeavor. A large number also came from the great labor centers of the north, and these were found to be enterprising and moral. They were for the most part men desirous of spending a delightful winter away from the scenes of vice and lawlessness, with the attendant opportunities for saving the greater part of their earnings. The isolation of the camp ten miles from the nearest town, Fayetteville, enabled comparatively easy enforcement of the prohibition law and there was as a consequence, a minimum of violence and crime. No agitation occurred to mar the peaceful pursuit of the work. This is a remarkable record when the paucity of the military and the almost entire absence of civil authority is considered in the control of a somewhat heterogeneous force of over seven thousand men. There were no tragedies.

Notwithstanding the class of American labor which migrated to the fields of construction in the various localities of the south in an endeavor to take advantage of the increased rates which were being offered by the numerous contractors for common labor, it was found that the supply was utterly inadequate to meet the requirements of the work. In their dilemma the contractors were forced to obtain labor from foreign fields, such as the Mexicans, Porto Ricans, Spaniards, Cubans, and even, in some cases, the Asiatic races. This forced a condition unexpected and at the same time embarrassing to the contractors, owing to the fact that some of these laborers were diminutive in size, unacclimated and unable to meet in many cases what proved to them conditions to which they were unaccustomed, and could not adapt themselves. After experimenting with this class of labor at great loss of time and money, the contractors were forced to release them and proceed to make arrangements whereby they could send recruiting agents out to points where labor was concentrated, for the purpose of selecting, as far as possible, such men as might appear to be best fitted for their requirements, and even this course in most instances failed to produce adequate results.

At first there was no means of providing the more conventional entertainments and so diversions were impromptu and spontaneous, but after the necessary buildings were completed, the Knights of Columbus and Y. M. C. A. huts were erected and became established to the grateful appreciation of the enormous crowds who benefitted by them religiously and socially.

Every night the auditoriums of these two noble institutions were filled with happy and enthusiastic audiences and the entertainments were both elevating and recuperative. The best of the screen world could be obtained merely for the effort of attendance.

On May 4th, 1919, the new Liberty Theatre was informally opened. This is the most substantially constructed building in the cantonment. Its capacity is thirty-five hundred and it is without doubt the finest lecture hall and place of amusement in any camp in the United States. A high roof and numerous means of exit along three sides provide excellent ventilation. The stage is large enough to show the most elaborate productions. A pitch of about ten feet insures perfect vision even to the most distant spectator while the lighting and accoustic properties are unexcelled. It is intended by the War Department to have here a series of entertainments two or three times a week throughout the year, besides during the day instructive discourses upon an endless variety of subjects will be given the men who are fortunate enough to be stationed at Camp Bragg.

In the early days all material had to be unloaded from the cars a distance of nearly two miles from the center of administration. This necessitated the clearing of wide spaces through the woods and uprooting of stumps and leveling of some parts to enable the hundreds of mule teams to haul lumber and supplies. Immediate preparations were made and work commenced for the furnishing of an adequate supply of water from McFayden's lake on the reservation and pumping it into large tanks which were placed on towers about fifty feet from the ground. This supplied enough water for use until the installation of the permanent supply was completed. A large dam across Little River deflects a sufficient amount of pure fresh water into a filtration plant through which it is pumped to a large reservoir three miles away, the location chosen on account of its elevation, and from there distributed over the entire camp. By actual government analysis the raw water was found to be 99 plus per cent. pure and yet the authorities required its filtration and chemical treatment before being used by the soldiers. The best of Redwood pipe was sent from the Pacific coast for underground conduits. The amount of water thus obtained is adequately sufficient to supply the six brigade camp originally planned and in addition would furnish enough water in excess of these requirements for a city as large as Fayetteville.

With the introduction of an adequate water supply the question of plumbing and heating arose. The Fred Cantrell Company of Chattanooga, Tenn., and H. Kelly Company of Minneapolis, Minn., combined forces for the execution of this work. So rapid yet so thorough was their work accomplished that before cold weather had permanently set in all the main buildings were equipped with running water and the wood stoves removed and supplanted by steam heating systems. A large bath house serves every two of the barrack buildings so that the soldier can drop in at any hour of the day or night and indulge in a refreshing shower of hot or cold water.

The road and street paving contracts were given to T. H. Gill & Co. of Binghamton, N. Y., Southern Paving Co. of Chattanooga, Tenn., and Simmons & Whitten of Charlotte, N. C. The absence of mud makes for fairly good natural roads if traffic is not too heavy, but this factor is to a large extent counterbalanced by the yielding character of the sandy surface, so with the influx of heavy army trucks and the increasing number of artillery, solid concrete roadways were constructed between the principal parts of the camp.

The fire protection system is excellent, although so far it has fortunately never been put to a severe test. There are two high power pumping engines in use and a street hydrant situated every few hundred yards furnishes an adequate force of water when occasion may require.

The crowning work of the contractors is the permanent 500 bed Base Hospital. This consists of a group of twenty two buildings and is located upon a slight eminence in section 30 commanding a fine view over the rest of the camp and the surrounding country. Its construction is of hollow tile and cement stucco, the latter work being done by the Zanzer-Reim Company of Chicago, and its total cost when completed will be over $1,000,000. It is intended by the government to equip it with every modern appliance and convenience known to modern medical science....

As a training camp for the newly recruited artillery-man and the embryonic aviator the reservation contains miles and miles of rolling country over which manoeuvring can take place and theoretical problems in the practice of war tried out. There is wood land and open field, steep incline and deep ravine, fordable streams and gentle slope, placid lakes and a rushing river. Topographically any variety of surface formation exists except the extremely rugged and inaccessably mountainous. Artificially the hand of man has created in the very brief space of time since the inception of the camp all that the soldier needs for his comfort, welfare and advancement in his calling....

The population of Fayetteville in 1918 was about ten thousand. Since the acquisition by the Federal government of the Camp Bragg Military Reservation and the immediate commencement there of immense building operations attracted such a precipitous influx of immigration as to already effect a permanent increase to the city of about fifty per cent. With a fluctuating force of soldiers at the camp averaging twenty thousand men and with Fayetteville the sole and only center for trade and recreation the future growth of the city is absolutely assured. New hotels and restaurants are in process of construction. Many new retail stores have been established and several of those already in existence have been compelled to enlarge their space and expand their facilities. And with all this the new era in Fayetteville's commercial life has only just begun.

from the US Army 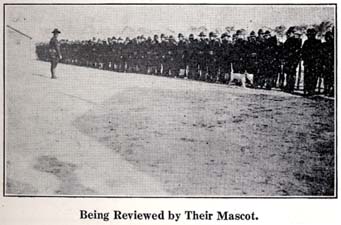 Camp Bragg and Fayetteville. Sketches of Camp and City 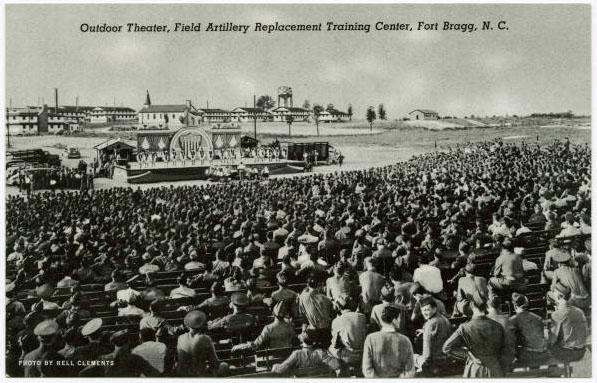 A postcard from the 1920s shows soldiers watching the “Roxyette Review” in the outdoor theater at Fort Bragg.