Apprenticeships were not uncommon in Colonial North Carolina, although the system was much less formal than the Apprenticeship system in England. Apprenticeships could be voluntary or compulsory. In the case of Jesse Cook, a young man in Bertie County during the mid eighteenth century, it was likely that his apprenticeship as a shipwright was compulsory following the death of his father, which left Cook an orphan. A transcription of his indenture -- the contract that bonded Cook to Hezekiah Mohun until his 21st birthday -- is below.

This Indenture made the Twenty-Seventh day of April in the year of our Lord One Thousand Seven Hundred and Fifty Nine between John Brown EsquireA title used by lawyers. one of the Justices of the County CourtA justice of the county court was a justice of the peace. Each county had a court that served as its main form of government throughout the colonial period. Justices, who were appointed by the governor, presided over small lawsuits and criminal courts, and they also performed many of the other functions of government, such as providing for roads and bridges and apportioning (dividing up and assigning) taxes. Each county also had a sheriff (also appointed by the governor) who presided over the county court, and clerks who kept records. of Bertie and his Successors of the one Part and Hezekiah Mohun of the same County and Province Ship WrightA shipwright is someone who builds ships. of the other Part. Witnesseth that the said John Brown by Virtue of the Power and Authority in him (by Law) vested do Put and Bind unto the said Hezekiah Mohun as an Apprentice Jesse Cook Orphan (or Minor) of Samuel Cook Decd.Deceased (dead). about the age of Seventeen years; The said Jesse Cook, with the said Hezekiah Mohun to Live untill he shall Accomplish the age of Twenty One years: during all which Term or Time the said Jesse Cook his said Master he shall faithfully Serve and all his lawful Commands everywhere Gladly Obey. Neither shall the said Jesse Cook frequent Publick HousesA public house was a tavern., Contract Matrimony or Commit FornicationHe couldn't marry or have sexual relations while he was an apprentice. during the said Term. And the said Hezekiah Mohun doth Convenant Promise and Agree to and with the said John Brown and his Successors that he will Teach or Cause to be Taught and Instructed the said Jesse Cook in the art and Mistery"Mistery" is probably mystery, as in "the art and mystery of a ship wright," which would suggest that shipbuilding was a skill you couldn't just pick up anywhere -- you had to be taught personally by a shipwright. But it could also be mastery, a more practical word suggesting simply that the boy would master the skills of the trade. of a Ship Wright in the Best Manner that he Can, And also that he will find and Provide for the said Jesse Cook, Sufficient Meat Drink apparrel Washing and Lodging in Sickness and in health for and during the said Term; And the said Hezekiah Mohun doth further Covenant and Oblige himself to Cause the said Jesse Cook to be Taught to Read and Write; And also at the Expiration of the said Term Pay to the said Apprentice what the Law in that Case doth allowApprentices weren't paid for their work, except occasionally in the last years of their apprenticeship. At the end of their terms, though, they received a small amount of money to help them get started in the world..

In Testimony whereof the Parties to these presentsEighteenth-century public documents were often referred to as "presents" -- not in the sense that someone was receiving a gift, but rather that the document is presented to those who may happen to read it. have hereunto Set their hands and Seals the day and year first above Written.

Sealed and Delivered in Presence of John Brown. 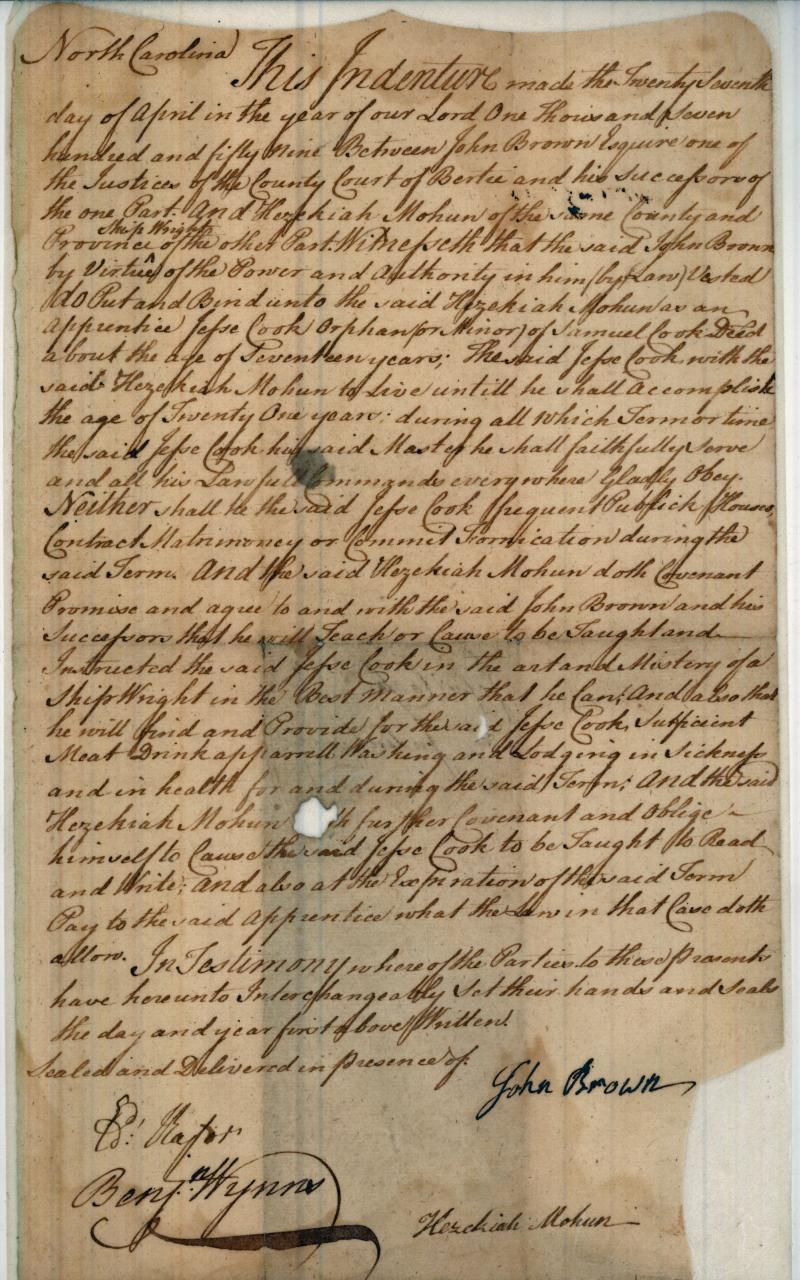 This indenture from 1759 bonded Jesse Cook, aged seventeen, as an apprentice to Hezekiah Mohun, a Bertie County shipwright, until Cook's twenty-first birthday.