The following is a transcribed letter written by an American soldier to his significant other. Letters like this written by soldiers in World War I help illustrate the living and combat conditions that were common in the European war zone.

Sweetheart
you will have to handle this letter lightly as to comments on the writing or construction as I am writing it with a gas mask onWorld War One was the first time chemicals were used as weapons during warfare. Germany used mustard gas (sulphur) and chlorine mustard gas, against Allied troops, and the British retaliated with their own versions of poisonous gas. At first, troops simply covered their faces with a cloth dipped in water or urine, which helped neutralize the chlorine. Later, gas masks were developed and issued to troops on both sides of the conflict. Gas was more psychologically terrifying then it was deadly. Only about 4% of causalities from the war were due to poisonous gas.. This doesn't mean that I am in gas but that it is a part of our daily life to ware it now so that we shall be ready to use it when we get to the front. You should try one of them for an hour or so, hell, Germans or nothing has any terrors for you after wearing it.

We have one more week of instruction here and then about one more to get everything ready to leave in and we are off to the big show. If the Allies keep going as they are now there wont be any show long. The news has been wonderful for the past few days. I don't hope for too much but it is great the recent progress that has been made. The Germans have evidently been taken very much by surprise and are very hard pressed in their present positions. It would certainly be wonderful if we could get the whole thing finished up this summer.

We had a very nice time Sunday afternoon at the Red CrossThe Red Cross, created in 1881, was a non-profit organization that supplied medical assistance to people who lived in areas effected by war or natural disaster. During World War I, the Red Cross supplied Allied troops with medical supplies. Because they were independent from the government, the Red Cross relied on donations to purchase supplies and pay doctors and nurses. Hanes attended one of their fundraisers while he was in France. fète we attended. It was at some Countess' house or chateau in the country. It was a very pretty old place but nothing wonderful at all. The grounds were very pretty and they had two or three right attractive girls there. The whole scene was laid for a huge drunk which it finally turned out to be. Your husband got the fullest he has been in years, and by the way the sickest next day. Billy Joyner, Creighton and I went out together on horseback, a ride of about six or eight miles. We got a table and sat down, there was nothing to do but go to drinking, as the girls were waiting to serve you and you had to spend some money some way for the Red Cross. We went to it and about six o'clock in the afternoon we decided we had better mount and beat it before we got so we couldn't mount. Some of the crowd who came back in trucks passed away completely. Frank Fuller got pretty tight and went up to the Colonel, who was standing in a crowd looking very dignified, cracked his heels together saluted and said, "Sir, I wish to report Major Pridgen is out in the field under a hay stack, fast asleep." They say it was very comical altho' very embarrassing to the Colonel. Major Pridgen is the Doctor we used to ride in sometimes, you know. I got my fill of wine on this trip, no more. I was too sick next day to bother it again soon.

We have two boys in the battery who are pretty good musicians. One of my new lieutenants plays a mandolin so with the guitar and violin of the other two we have some great playing and singing in my room every night after supper. It helps out a lot after a hard day to forget it all and sing awhile.

We have a very congenial crowd in my battery now and we get on famously together.

Give my dearest love to all the family. I hope mother's health is improving.

All my love to you my precious you mean more than all the world to me, I truly hope I may soon be permitted to return to you.

The American Expeditionary Forces
from Library of Congress

My Fellow Soldiers: Letters from World War I

from the Smithsonian National Postal Museum

Letters from The Great War
from PBS 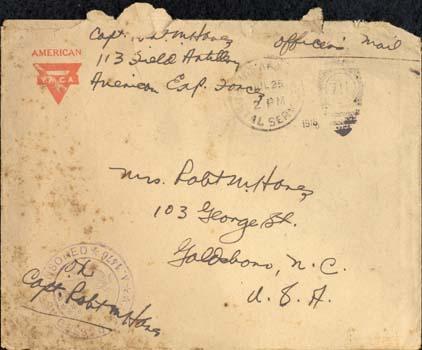