This interview comes from the "Remembering World War II. World War II Remembered." Those interviewed told about conditions in active duty service, battle strategy, and other important elements of warfare.

I grew up as Margaret Sampson and I lived at 513 South 13th Street. Across the street from me was a vacant lot and just past the vacant lot was Community Hospital. In front of Community Hospital was Williston Primary School and that's the school I attended. I was in first grade in 1944 and on 10th Street was a POW Camp, German prisoners were housed there. The camp extended from Castle Street to Ann Street, from 8th Street to 10th Street.

So as we were outside as small children at school, we often saw the prisoners. The teachers devised a game to help us when we were outside and we learned to climb trees and that was a way to protect ourselves when there were prison breaks. There weren't very many prison breaks, but the prisoners did escape and they would run through the schoolyard, through Community Hospital area over onto 13th Street usually, then down Church Street.

Even at home when we were not in school and they would have prison breaks, I had a chance to watch them chase them. I was an only child, but I was a tomboy I guess you would call it and I learned to climb easily. I just had a problem getting down. I could always get up. My problem was getting down. But when I would discover the prisoners running through the neighborhood, I would climb the garage door, jump on top of the garage, then hop on top of the house and sit next to the chimney and I could watch the guards chase the prisoners through the neighborhood....

Another camp was at Carolina Beach Road and Shipyard Boulevard and a third was at the airport. The barracks buildings, a few of the barracks buildings from the camp at the airport are still there and they're used as storage. There are no signs of the other two. Hopefully one day we will at least have markers because a lot of people still don't know those camps were there and by the end of the war, there were 551 prisoners here.

They worked on a lot of the farms. The only thing they did not have was the freedom to come and go as they would like to so it was hard for us to understand why they wanted to break out of the prison unit. They had their own library. They had an orchestra. They had a garden. They played games outside and as we know the weather here is not very, very harsh normally in the winter so we, as Wilmingtonians and Americans, felt - we just couldn't understand why they wanted to get out, but then we forgot about the one thing they did not have and that was freedom.

[The prisoners were] Germans.... It was fascinating to watch them bring the prisoners into Wilmington. My father, Haywood Sampson, was a fireman for Atlantic Coastline and the prisoners came in on the train. He would notify us when prisoners were coming in and a lot of times my mother would take me over to 10th and Red Cross in front of what was then James Walker Memorial Hospital and you would see people stop on the sidewalks and watch them as they marched them up Red Cross Street to 10th and south on 10th to the POW camp and they were housed there.

Many of them worked at the dairy farms and the flower farms and I have been told and found evidence through my research, after the war, they continued to correspond with many of the families for whom they worked during the wartime. They were taken out as groups for different, I guess we may call them excursions, but they went to different places in the community, but I was never aware of them in any stores or whatever....

It was very interesting trying to document information on the POW camps that were here. I remember them from my childhood. There were lots of people, civilians here who remembered, but once I started to research the material, the federal government told me there was never a POW camp in Wilmington. For the longest time when I mentioned this, I would get very adamant about it because people would tell me there were no POW camps in Wilmington and I do know what I saw.

So after being repeatedly told by our government the camps were not here, I decided to take drastic steps. Knowing that there were German prisoners, I contacted East Berlin because at that time we still had East and West Berlin and I wrote to them asking for information concerning POW's in the camps in Wilmington, North Carolina. I also wrote to Moscow. Well they in turn did exactly what I thought they would do, they sent my letters to the State Department.

Within a very short time comparatively speaking, I was notified by National Archives that after further search and review, information had been found and they would gladly send me the information through the Freedom of Information Act that I was trying to get. So then I received information stating there were 551 prisoners here at the end of the war. I was given records of inspection that were signed by the commanding officers at that time.

The three POW camps that I had mentioned were now actually identified. So it showed that they were hiding this information and that in turn made me more curious. During my research I found that one of the laws stated a POW camp was not to be located within the city limits. Well the one on 10th Street was within the city limits, but then it was in the poor neighborhood so maybe they didn't really think that would cause a problem and it was stated that careful use of the prisoners was to be made.

They really weren't supposed to work on as many farms as they did and as many prisoners as they did. I was also able to find a copy of a letter written by a former prisoner to the farmer, the dairy farmer, for whom he worked when he was here and I sent a copy of that to Washington and asked them, now tell me they were not here because he mentioned the camp and he mentioned how much he enjoyed being with the family and that at Christmas, the family treated him as though he were a member and he was given gifts just the way every other member of the family was and how well he was fed.

Prisoners of War in North Carolina 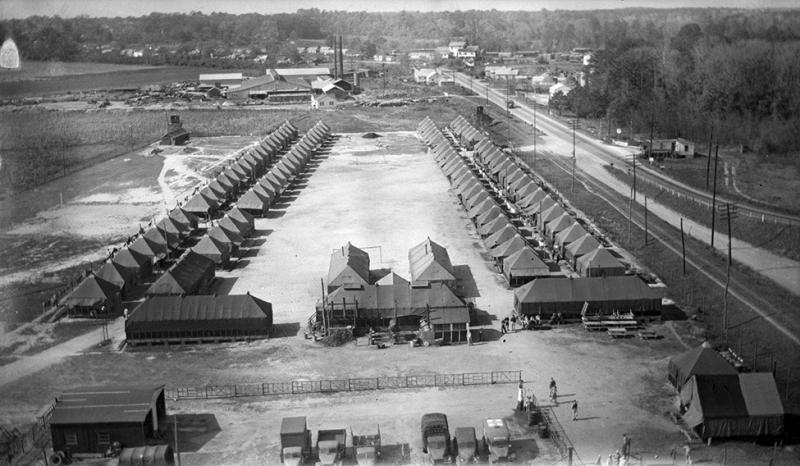 A prisoner of war camp in Williamston, North Carolina. Seventeen POW camps were established in the state during World War II.

from the Greensboro Public Library