The following is excerpted from Upton Sinclair's The Jungle. Sinclair's book wrote extensively about conditions in the meatpacking industry. One of the important aspects he wrote about concerned food adulteration (or altering food for a different purpose, usually economic). Negatively altering food for economic gain was very common during this era and publications like Sinclair's served to warn people to avoid consumption.

With one member trimming beef in a cannery, and another working in a sausage factory, the familyJurgis Rudkus is the main character in The Jungle He immigrates to America with his family from Lithuania. had a first-hand knowledge of the great majority of Packingtown swindles. For it was the custom, as they found, whenever meat was so spoiled that it could not be used for anything else, either to can it or else to chop it up into sausage. With what had been told them by JonasJonas was a relative of the main character, Jurgin. Most of the family worked in the meat packing plants., who had worked in the pickle"Pickling" at this time referred to any means of preserving food in a liquid form by adding salt, acid, and/or chemical preservatives. That included pickling vegetables, but also meats, such as hams, which were “pickled” by being injected with a brine that contained salt and chemicals. rooms, they could now study the whole of the spoiled-meat industry on the inside, and read a new and grim meaning into that old Packingtown jest -- that they use everything of the pig except the squeal.

Jonas had told them how the meat that was taken out of pickle would often be found sour, and how they would rub it up with soda to take away the smell, and sell it to be eaten on free-lunch counters; also of all the miracles of chemistry which they performed, giving to any sort of meat, fresh or salted, whole or chopped, any color and any flavor and any odor they chose. In the pickling of hams they had an ingenious apparatus, by which they saved time and increased the capacity of the plant -- a machine consisting of a hollow needle attached to a pump; by plunging this needle into the meat and working with his foot, a man could fill a ham with pickle in a few seconds. And yet, in spite of this, there would be hams found spoiled, some of them with an odor so bad that a man could hardly bear to be in the room with them. To pump into these the packers had a second and much stronger pickle which destroyed the odor -- a process known to the workers as "giving them thirty per cent." Also, after the hams had been smoked, there would be found some that had gone to the bad. Formerly these had been sold as "Number Three Grade," but later on some ingenious person had hit upon a new device, and now they would extract the bone, about which the bad part generally lay, and insert in the hole a white-hot iron. After this invention there was no longer Number One, Two, and Three Grade -- there was only Number One Grade. The packers were always originating such schemes -- they had what they called "boneless hams," which were all the odds and ends of pork stuffed into casings; and "California hams," which were the shoulders, with big knuckle joints, and nearly all the meat cut out; and fancy "skinned hams," which were made of the oldest hogs, whose skins were so heavy and coarse that no one would buy them -- that is, until they had been cooked and chopped fine and labeled "head cheese!"

It was only when the whole ham was spoiled that it came into the department of ElzbietaElzbieta was the main character’s mother-in-law.. Cut up by the two-thousand-revolutions-a-minute flyers, and mixed with half a ton of other meat, no odor that ever was in a ham could make any difference. There was never the least attention paid to what was cut up for sausage; there would come all the way back from Europe old sausage that had been rejected, and that was moldy and white -- it would be dosed with borax and glycerine, and dumped into the hoppers, and made over again for home consumption. There would be meat that had tumbled out on the floor, in the dirt and sawdust, where the workers had tramped and spit uncounted billions of consumption germs"Consumption" was a common name for tuberculosis. It was so called because a person with this disease wasted away or was "consumed" by it.. There would be meat stored in great piles in rooms; and the water from leaky roofs would drip over it, and thousands of rats would race about on it. It was too dark in these storage places to see well, but a man could run his hand over these piles of meat and sweep off handfuls of the dried dung of rats. These rats were nuisances, and the packers would put poisoned bread out for them; they would die, and then rats, bread, and meat would go into the hoppers together. This is no fairy story and no joke; the meat would be shoveled into carts, and the man who did the shoveling would not trouble to lift out a rat even when he saw one -- there were things that went into the sausage in comparison with which a poisoned rat was a tidbit. There was no place for the men to wash their hands before they ate their dinner, and so they made a practice of washing them in the water that was to be ladled into the sausage. There were the butt-ends of smoked meat, and the scraps of corned beef, and all the odds and ends of the waste of the plants, that would be dumped into old barrels in the cellar and left there. Under the system of rigid economy which the packers enforced, there were some jobs that it only paid to do once in a long time, and among these was the cleaning out of the waste barrels. Every spring they did it; and in the barrels would be dirt and rust and old nails and stale water -- and cartload after cartload of it would be taken up and dumped into the hoppers with fresh meat, and sent out to the public's breakfast. Some of it they would make into "smoked" sausage -- but as the smoking took time, and was therefore expensive, they would call upon their chemistry department, and preserve it with borax and color it with gelatine to make it brown. All of their sausage came out of the same bowl, but when they came to wrap it they would stamp some of it "special," and for this they would charge two cents more a pound.

Such were the new surroundings in which Elzbieta was placed, and such was the work she was compelled to do. It was stupefying, brutalizing work; it left her no time to think, no strength for anything. She was part of the machine she tended, and every faculty that was not needed for the machine was doomed to be crushed out of existence. There was only one mercy about the cruel grind -- that it gave her the gift of insensibility.

from the Constitutional Rights Foundation 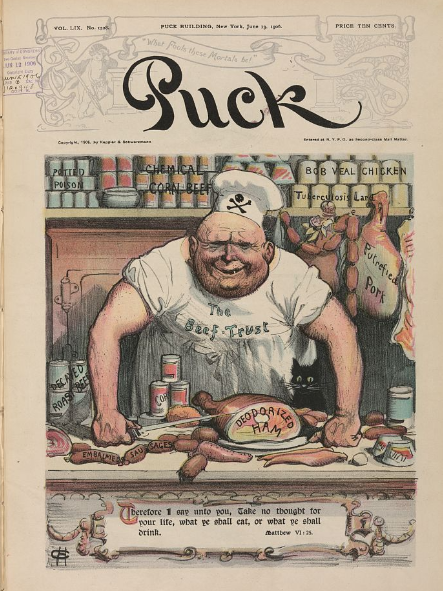 An illustration from Puck magazine in 1906, showing a butcher labeled "The Beef Trust" standing behind a counter with poison products. Image courtesy of Library of Congress.

The Jungle, Muckrakers, and Teddy Roosevelt