Richard Etheridge, civil rights exemplar and longtime head of the Pea Island Life-Saving Station, was born enslaved in 1842 on Roanoke Island, North Carolina. His parents were John B. Etheridge III, whose ancestors had owned land on Roanoke Island for a century, and Rachel Dough, an enslaved woman. Richard Etheridge was emancipated when the Union took over the island in 1862. Union troops turned Roanoke Island into a freedmen’s colony, one where local Black people owned land and received education from northern white people. Etheridge enlisted in the Union Army soon after the colony was formed and became a sergeant. After the war, Etheridge moved back to Roanoke Island and wrote to the Freedmen’s Bureau protesting treatment of black people on the island. Etheridge also started working at a life-saving station on nearby Bodie Island. This was one of many life-saving stations that dotted the North Carolina coast. Stations were on constant watch during most of the year. Their members sometimes used buoys shot from cannons to rescue shipwrecked passengers, but they often had to go into the water themselves. In many instances, going into the water put life-savers in danger.

Etheridge performed admirably at the Bodie Island station. He worked along with several other black surfmen (those who went out into the surf to save shipwrecked passengers). In 1879, Etheridge became head of the nearby Pea Island station. Several black Americans were transferred to work there so that he would have an all-black crew. Pea Island was the only station led by and composed entirely of black Americans. It was a civil rights accomplishment at a time when black Americans were being pushed out of places of power in other areas of Southern life. The inspector who gave Etheridge his job wrote, “I am aware that no colored man holds the position of keeper… [but] I am fully convinced that the efficiency of the service at this station… will be greatly enhanced by [the hiring of Etheridge.]”

Etheridge’s most notable rescue occurred in 1896. The ship E.S. Newman, with nine passengers on board, had run aground offshore during a fierce storm. Etheridge was unable to use cannons or other equipment that would have kept his men out of the turbulent water. He tied heavy lines around two of his men and sent them into the surf. Once they reached a passenger on the ship, they tied themselves to that person and had men on shore pull the heavy lines and bring the group to safety. His men were able to save everyone on the boat. Richard Etheridge led the station for four more years until his death in 1900. He died in 1900 of natural causes while at work on his post. In the years after his death, the station continued under the leadership of black keepers. In 1937, the Coast Guard, which took over the service in 1915, tried to install a white keeper in charge of Pea Island. Black locals along with white congressman Lindsay Warren protested. The Coast Guard relented and kept black keepers until the station closed in 1947.

The 1990s and onward have witnessed a revival of interest and respect for Richard Etheridge and his team. Etheridge was never officially awarded during his lifetime for his many accomplishments. In 1996, Etheridge posthumously received the Gold Lifesaving Medal from the Coast Guard along with his fellow servicemembers for the saving of the E.S. Newman crew. A statue of Etheridge was also unveiled in Manteo fourteen years later in 2010. This statue is one of the few depicting a historical black American in the state. It is a testament to a figure who accomplished great work despite the strictures of the segregated society in which he lived.

from the United States Coast Guard 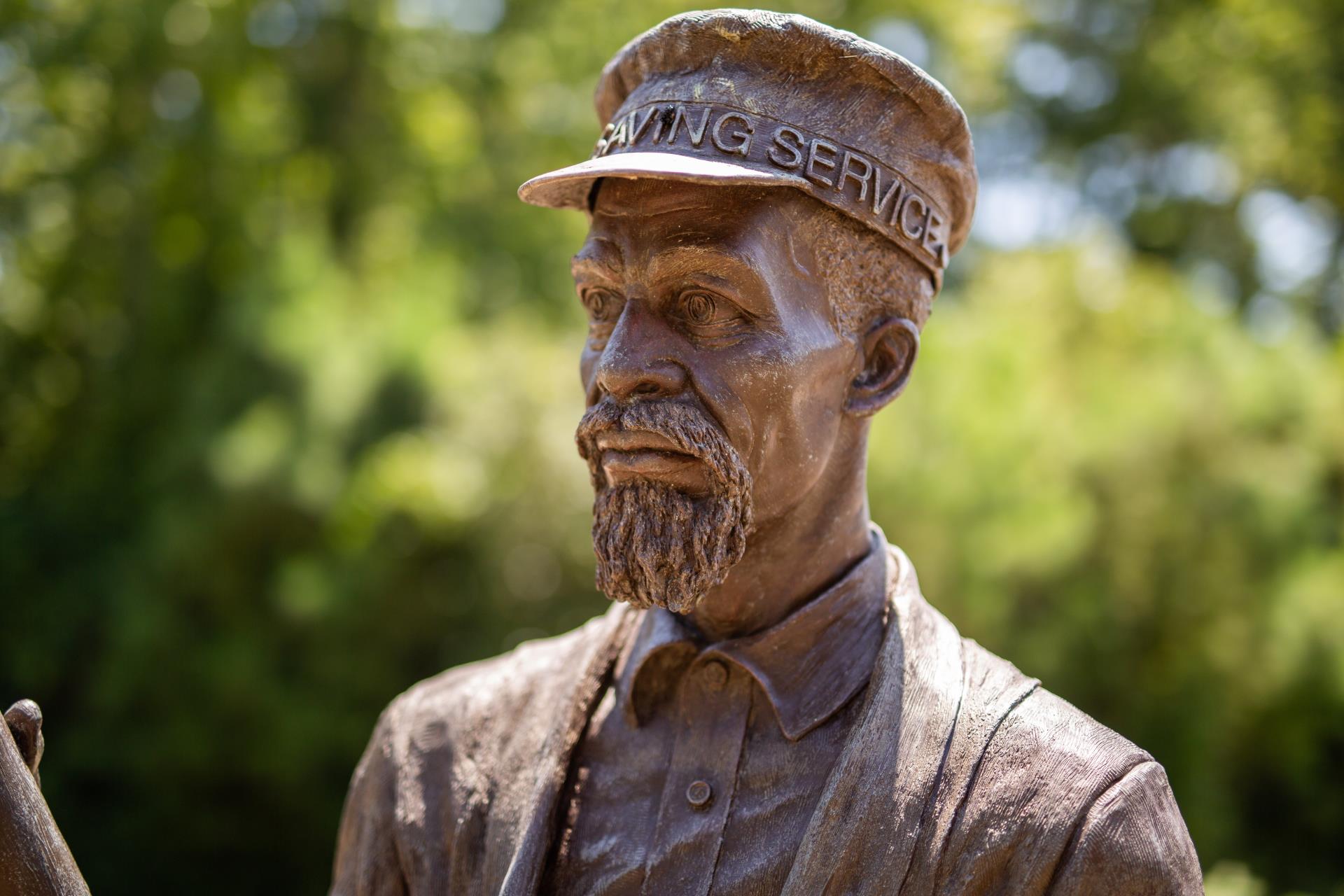 Richard Etheridge Statue, in Manteo, NC. Image from the Town of Manteo