By far, the food soldiers received has been the source of more stories than any other aspect of army life. The Union soldier received a variety of edibles. The food issue, or ration, was usually meant to last three days while on active campaign and was based on the general staples of meat and bread. Meat usually came in the form of salted pork or, on rare occasions, fresh beef. Rations of pork or beef were boiled, broiled or fried over open campfires.

Army bread was a flour biscuit called hardtack, re-named “tooth-dullers,” “worm castles,” and “sheet iron crackers” by the soldiers who ate them. Hardtack could be eaten plain though most men preferred to toast them over a fire, crumble them into soups, or crumble and fry them with their pork and bacon fat in a dish called skillygalee. 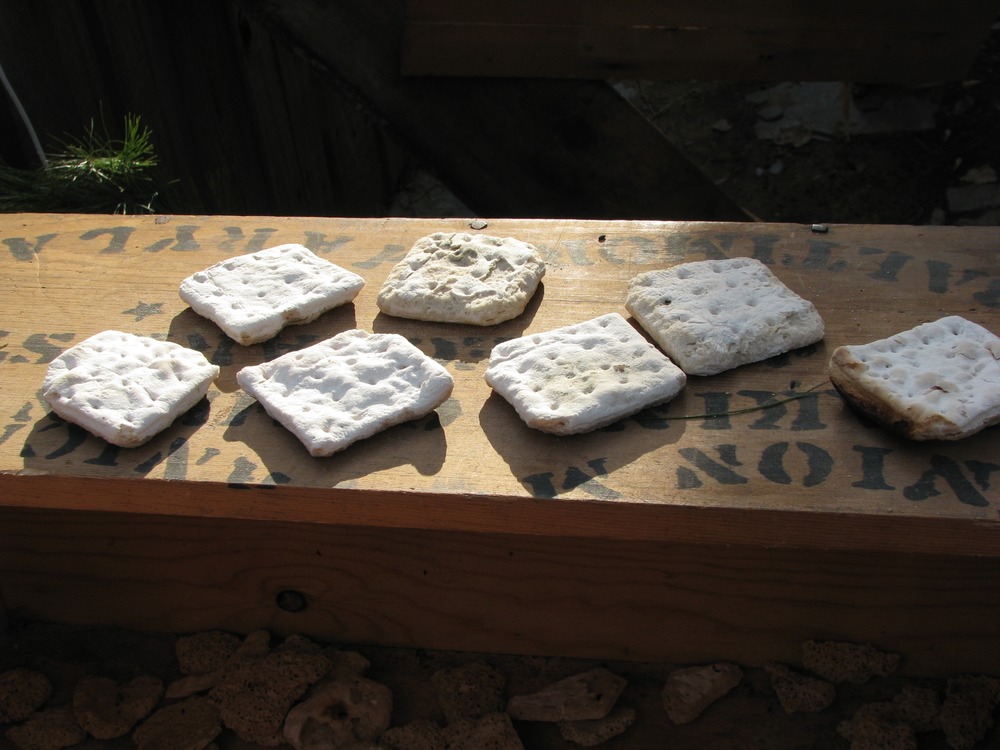 Hardtack, a dry flour biscuit, made up a large portion of a soldier’s daily ration. Factories in the North baked hundreds of hardtack crackers every day, packed them in wooden crates and shipped them out by wagon or rail. If the hardtack was received soon after leaving the factory, it could be tasty and satisfying. Usually, the hardtack did not get to the soldiers until months after it had been made. By that time, they were too hard to be eaten without first being soaked in water or coffee. Sometimes they were infested with small bugs the soldiers called weevils.

Other food items included rice, peas, beans, dried fruit, potatoes, molasses, vinegar, and salt. Baked beans were a northern favorite when the time could be taken to prepare them and a cooking pot with a lid could be obtained. Coffee was a most desirable staple and some soldiers considered the issue of coffee and accompanying sugar more important than anything else. Coffee beans were distributed green so it was up to the soldiers to roast and grind them. The task for this most desirable of beverages was worth every second as former soldier John Billings recalled: “What a Godsend it seemed to us at times! How often after being completely jaded by a night march… have I had a wash, if there was water to be had, made and drunk my pint or so of coffee and felt as fresh and invigorated as if just arisen from a night’s sound sleep!”

Soldiers often grouped themselves into a “mess” to combine and share rations, often with one soldier selected as cook or split duty between he and another man. But while on active campaign, rations were usually prepared by each man to the individual’s taste. It was considered important for the men to cook the meat ration as soon as it was issued, for it could be eaten cold if activity prevented cook fires. A common campaign dinner was salted pork sliced over hardtack with coffee boiled in tin cups that each man carried.

The southern soldier’s diet was considerably different from his northern counterpart and usually in much less quantity. The average Confederate subsisted on bacon, cornmeal, molasses, peas, tobacco, vegetables and rice. They also received a coffee substitute which was not as desirable as the real coffee northerners had. Trades of tobacco for coffee were quite common throughout the war when fighting was not underway. Other items for trade or barter included newspapers, sewing needles, buttons, and currency.