The Struggles of a Tenant Farmer

When crops were sold in the fall of each year, tenant farmers hoped to have enough money to pay landowners the rent for the house they lived in and the land they farmed and to pay merchants for food they had bought on credit during the year. Sharecroppers hoped to pay landowners for rent of a house and land as well as for farming supplies and tools; they also hoped to pay local merchants for the food they had bought during the year.

Often the crops did not bring in enough money, and the tenants and sharecroppers went into debt. One way they could continue farming was to sign chattel mortgages, in which they promised to pay back the money they owed. In this contract they conveyed certain items of personal property to the person to whom they owed money. If they paid their debt, these items would not be sold. But if they failed to pay their debt, the mortgage allowed the person to whom money was owed to sell the conveyed items to pay off the debt.

The W. R. Miller Papers at the State Archives contain many examples of chattel mortgages. Some of these mortgages state that the debtor is a cropper or tenant farmer of C. R. Miller, a landowner in Orange County.

A chattel mortgage is transcribed below. It contains many misspellings but is reprinted as it was written, with some editorial corrections for clarity. The farmer, Jessa Buttler (also spelled as Jessy Butler in another document), apparently was unable to read or write and had to sign this mortgage with an X, representing his mark. It is unclear who wrote the document for him.

I Jessa Buttler of the county of Orang in the state of NC am indebit to Chs R. Miller of orang conty in sade state on the sum of eighty eight dollars and twenty cts for which he holds my note to be due on the 15 day of October 1883 and to secure the payment of the same I do hearby conveay to him these articles of personel property to wit my gray horse Charles... 8 years olde and blind and my intire crop of corne wheat oats tobacco shuck foder straw.... I am to farm on Chs R Miller lands....

but on the spec[i]al trust that if I file to pay sade debit and intrest in or before the 15 day October 1883 then he may sell said property or so much thereof as may be ne[ces]sary by public auction for cash first giving twnty days notis at three public places and aply the proceeds of such sales to the discarge of saide debit and intrest on the same and pay any surplus to me giving under my hand and seal this 3 day of March 1883.

An Accounting of Debts

Another document -- you can see the original in the "primary sources" tab -- reflects Mr. Butler’s attempts to pay off his debt. This document, reproduced below, shows the principal of the debt, the interest that was added to the debt, and how much money Mr. Butler owed as of October 26, 1890. 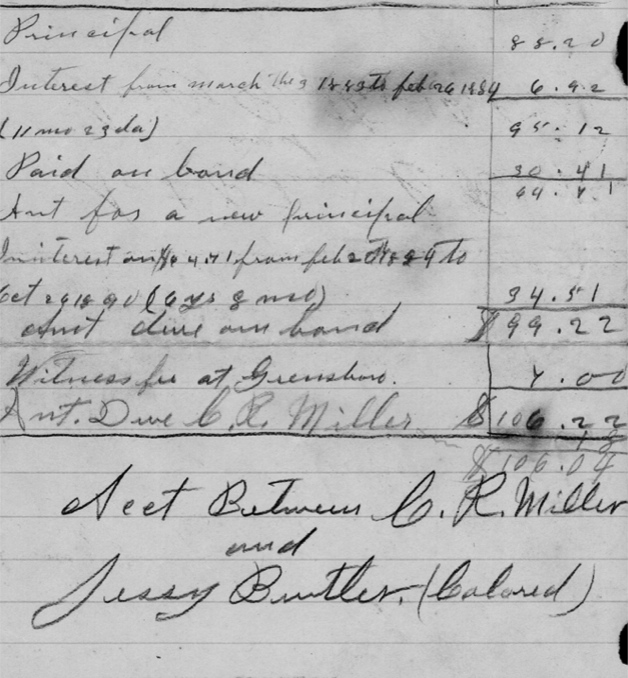