Provided by the National Oceanic and Atmospheric Administration

Flooding is an overflowing of water onto land that is normally dry. It can happen during heavy rains, when ocean waves come onshore, when snow melts too fast, or when dams or levees break. Flooding may happen with only a few inches of water, or it may cover a house to the rooftop. The most dangerous flood event, the flash flood, happens quickly with little or no warning; other flooding events occur over a long period and may last days, weeks, or longer.

What is a River Flood?

A river flood occurs when water levels rise in a river due to excessive rain from tropical systems making landfall, persistent thunderstorms over the same area for extended periods of time, combined rainfall and snowmelt, or an ice jam.

What is Coastal Flooding?

Coastal flooding occurs when a hurricane, tropical storm, or tropical depression produces a deadly storm surge that overwhelms coastal areas as it makes landfall. Storm surge is water pushed on shore by the force of the winds swirling around the storm. This advancing surge combines with the normal tides to create the hurricane storm tide, which can increase the average water level 15 feet or more. The greatest natural disaster in the United States, in terms of loss of life, was caused by a storm surge and associated coastal flooding from the great Galveston, Texas, hurricane of 1900. At least 8,000 people lost their lives.

What is Inland Flooding?

When tropical cyclones move inland, they are typically accompanied by torrential rain. If the decaying storm moves slowly over land, it can produce rainfall amounts of 20 to 40 inches over several days. Widespread flash flooding and river flooding can result.

What is a Flash Flood?

A flash flood is a rapid rise of water along a stream or low-lying urban area. Flash flooding occurs within six hours of a significant rain event and is usually caused by intense storms that produce heavy rainfall in a short amount of time. Excessive rainfall that causes rivers and streams to swell rapidly and overflow their banks is frequently associated with hurricanes and tropical storms, large clusters of thunderstorms, supercells, or squall lines. Other types of flash floods can occur from dam or levee failures, or a sudden release of water held by an ice jam. Heavy rainfall in the mountains can cause downstream canyon flooding.

Why is a Flash Flood so Dangerous?

Flash floods can occur with little or no warning. Flash flood damage and most fatalities tend to occur in areas immediately adjacent to a stream or arroyo. Flash floods are very strong -- they can roll boulders, tear out trees, destroy buildings and bridges, and scour out new channels. Rapidly rising water can reach heights of 30 feet or more. Flash flood-producing rains falling on steep terrain can weaken soil and trigger catastrophic mud slides that damage homes, roads, and property.

What Areas are at Risk From Flash Floods?

Densely populated areas are at a high risk for flash floods. The construction of buildings, highways, driveways, and parking lots increases runoff by reducing the amount of rain absorbed by the ground. This runoff increases the flash flood potential. Sometimes, streams through cities and towns are routed underground into storm drains. During heavy rain, the storm drains can become overwhelmed and flood roads and buildings. Low spots, such as underpasses, underground parking garages, and basements can become death traps.

Areas near rivers are at risk from flash floods. Embankments, known as levees, are often built along rivers and are used to prevent high water from flooding bordering land. In 1993, many levees failed along the Mississippi River, resulting in devastating flash floods. The city of New Orleans experienced massive devastating flooding days after Hurricane Katrina came onshore in 2005 due to the failure of levees designed to protect the city.

Dam failures can send a sudden destructive wall of water downstream. Heavy rainfall saturates and weakens earth-filled dams, which make up about 80 percent of the approximately 76,000 dams in the U.S. In 1889 a dam break upstream from Johnstown, Pennsylvania, released a 30-40 foot wall of water that killed 2200 people within minutes.

Vacationing or recreating along streams or rivers can be a risk if there are thunderstorms in the area. A creek only 6 inches deep in mountainous areas can swell to a 10-foot deep raging river in less than an hour if a thunderstorm lingers over an area for an extended period of time. Mountains and steep hills produce rapid runoff and causes streams to rise quickly. Rocks and clay soils do not allow much water to infiltrate the ground. Saturated soil also can lead rapidly to flash flooding.

Very intense rainfall can produce flooding even on dry soil. In the West, most canyons, small streams and dry arroyos are not easily recognizable as a source of danger. A wall of water 10-15 feet high can scour a canyon suddenly.

Ice jams and snowmelt can help cause flash floods. A deep snowpack increases runoff produced by melting snow. Heavy spring rains falling on melting snowpack can produce disastrous flash flooding. Melting snowpack may also contribute to flash floods produced by ice jams on creeks and rivers. Thick layers of ice often form on streams and rivers during the winter. Melting snow and/or warm rain running into the streams may lift and break this ice, allowing large chunks of ice to jam against bridges or other structures. This causes the water to rapidly rise behind the ice jam. If the water is suddenly released, serious flash flooding could occur downstream. Huge chunks of ice can be pushed onto the shore and through houses and buildings. 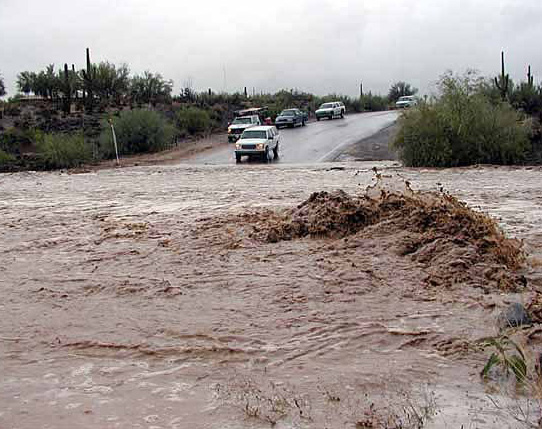 Cars approach a dangerous stretch of road during a flash flood. 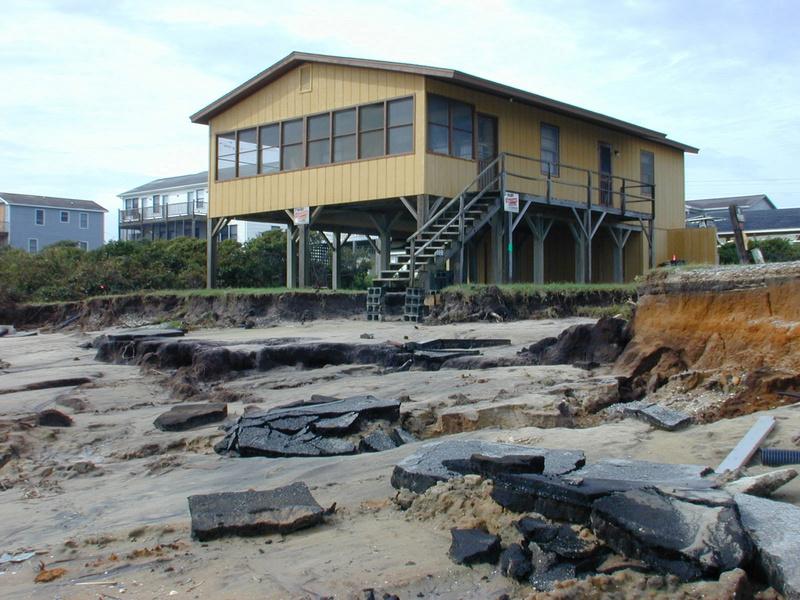 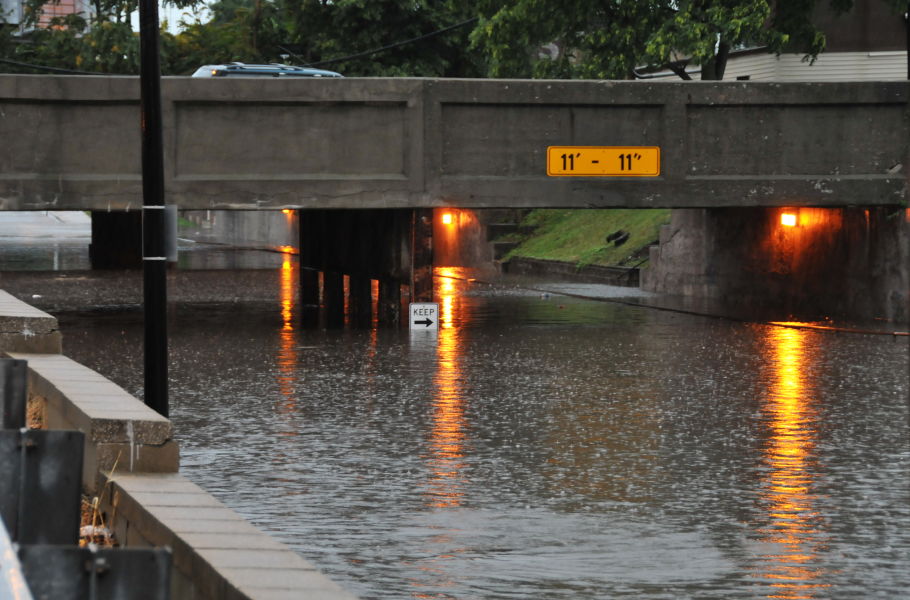