Durham's Hayti Neighborhood. Compare with the map above. 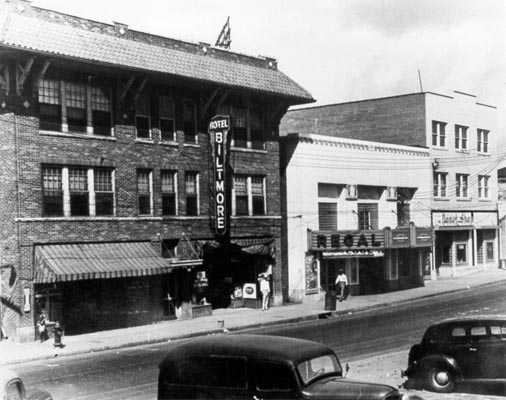 A view of Hayti’s Pettigrew Street in the 1940s. The Hayti community was a casualty of the Durham Expressway.

So what happened to the community when those businesses went out? A number of people have talked about...

They appeased us in a way, I believe, this is just my thought...when they moved us... See, all of Hayti and in that area over there from Roxboro Street over to Alston Avenue, Pettigrew Street, that section, that was all black.

There were many houses... I looked at that area and I don't know how in the world did all those houses get there. But they tore all that stuff down. They widened both of the streets for the expressway to come in. They moved people. In neighborhoods like this they put up the cinder block shacks and things they got down there. And believe it or not people had...a lot of people over there in the wintertime didn't have window glasses. Their roof leaked, holes in the floor, and they put them in a sound house. So they felt better. Then they started building projects. And I think they built McDougald's in the fifties. And people hadn't had tile floors, a bathroom, heat on the wall, you know. And really they thought they were really getting something, you know. Urban renewal was good, they thought. Then they put up Fayetteville Street, Cornwallis.

And what they did, they concentrated all in a little area. And one of the things that they destroyed by that was they put them so far apart from each other. And now you are centrally located. And like today they're putting fences around these places.

They took our...I think they destroyed Esprit de Corps. You know, I want to fix my house like I want and then let everybody have the same type house. They know exactly where you are. They tore up your businesses.

So Hayti and Fayetteville Street was a common denominator. If you wanted a hair cut, you wanted your nails done, wanted your hair fixed, you want to go to the movies, you need to go to the drug store, you want to go to the liquor store, you had to go to Hayti for lots of reasons. While you were there if you wanted something from the Five and Dime...we had Five and Dimes then and a clothing store, a furniture store, dry cleaner, hospital, doctors' offices. Had all that down there. But now urban renewal comes up and the doctors move over here in this area and they moved over here in that area.

And now in Durham once upon a time blacks were so closely knitted because of the way they had things you could go to Hayti if you didn't know where a person lived you'd go to Hayti and there's a possibility you're going to see them. Now people stay here and I saw some people this week. A lady died that was a friend of mine that lived in Charlotte. But I went over there yesterday [unclear] they had a little get together eating and whatever. And I saw some people that I hadn't seen in fifteen years and they tell me they're living in Durham. But they live way out in Oxford Manor somewhere.

Then they made them...they put shopping centers, stores... Like right here in this community. We had to go to Wellons Village if you want to go to a store. It's no more community thing. It ain't no... And the people that live over on this side, they got a shopping center. They don't have to come to this shopping center. So really we don't have nothing to make our paths cross. Our paths don't ever have to cross. And I think this was done by design. Maybe not. 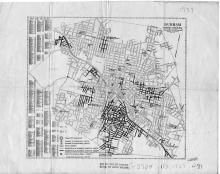