On the morning of September 2, 1945, more that two weeks after accepting the Allies’ terms, Japan formally surrendered. The ceremonies, less than half an hour long, took place on board the battleship USS Missouri, anchored with other United States and British ships in Tokyo Bay.

On July 26, U.S. President Harry S. Truman, Brisith Prime Minister Winston Churchill, and Chinese President Chiang Kai-shek issued the “Potsdam Declaration,” which outlined terms of surrender by the Empire of Japan and stated that if Japan did not surrender, it would face “prompt and utter destruction.” Japan initially rejected the ultimatum. But after the atomic bombing of Hiroshima and Nagasaki and the Soviet invasion of Manchuria, the Japanese government agreed on August 15 to surrender on condition that Japan be allowed to keep its emperor. “Should we continue to fight,” the emperor told his people, “it would not only result in the ultimate collapse and obliteration of the Japanese nation but would lead also to the total extinction of human civilization."

The Allied occupation of Japan began on August 28, and the Empire of Japan formally surrendered five days later — ending World War II six years and one day after it had begun.

CBS Radio broadcast this coverage of the surrender of Japan.

Surrender of Japan (1945)
from the National Archives 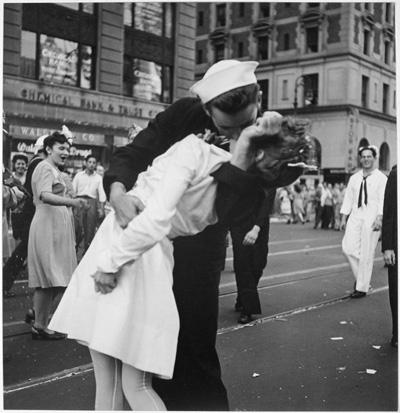 On August 14–15, 1945, as news of Japan’s surrender spread, citizens of Allied nations around the world celebrated “V-J Day,” Victory over Japan Day, the end of World War II.