Five months after the Selma-to-Montgmery March, the Congress passed and President Johnson signed into law the Voting Rights Act of 1965. Shortly before noon on August 6, 1965, Johnson drove to the U.S. Capitol building. Waiting for him were the leaders of Congress and of the civil rights movement, Martin Luther King Jr. and John Lewis among them. In signing the act into law, Johnson told the nation:

The central fact of American civilization... is that freedom and justice and the dignity of man are not just words to us. We believe in them. Under all the growth, and the tumult, and abundance, we believe. And so, as long as some among us are oppressed and we are part of that oppression, it must blunt our faith and sap the strength of our high purpose.

The Fifteenth Amendment already barred racial discrimination in voting rights, so the problem was not that African Americans lacked the legal right to vote. It was that some state and local officials had systematically deprived blacks of those rights. The Voting Rights Act accordingly authorized the federal government to assume control of the voter registration process in any state or voting district that had in 1964 employed a literacy or other qualifying test and in which fewer than half of voting age residents had either registered or voted. Six entire southern states were thus “covered,” as were a number of counties in several other states. Covered jurisdictions were prohibited from modifying their voting rules and regulations without first affording federal officials the opportunity to review the change for discriminatory intent or effect. Other provisions barred the future use of literacy tests and directed the attorney general of the United States to commence legal action to end the use of poll taxes in state elections. (The Twenty-Fourth Amendment to the U.S. Constitution, ratified in January 1964, already barred the poll tax in elections for federal office.)

The introduction of federal “examiners” ended the mass intimidation of potential minority voters. The results were dramatic. By the end of 1965, the five states of the Deep South alone registered 160,000 new African-American voters. By 2000, African-American registration rates trailed that of whites by only 2 percent. In the South, where in 1965 only two African Americans served either in the U.S. Congress or a state legislature, the number in December 2008 was 160.

The Voting Rights Act was originally enacted for a five-year period, but it has been both extended and expanded to introduce new requirements, such as the provision of bilingual election materials.

In 1982, President Ronald Reagan signed a 25-year extension: “The right to vote is the crown jewel of American liberties,” he said, “and we will not see its luster diminished.” President George W. Bush signed another 25-year extension in 2006. 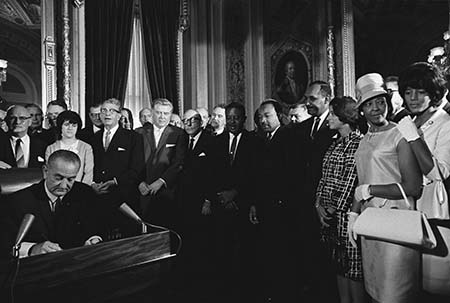