War on the Outer Banks

The Outer Banks of North Carolina were the setting for important conflicts during the Civil War. Union victories at Hatteras Inlet and Roanoke Island early in the war placed the area under Federal control and extended their blockade of the southern coast.

The federal campaign began on August 27, 1861 with an amphibious assault by Commodore Silas Stringham and General Benjamin Butler on two small and lightly defended forts at Cape Hatteras. The Confederate government had placed a higher priority on the conflicts in Virginia, and thus had made little effort to outfit and maintain these forts. The poorly-trained and poorly-equipped Confederate militia and recruits manning them were also plagued by thirst and mosquitoes. The Federals took both forts in less than 48 hours, and not one Union soldier was killed. The entire Pamlico Sound north to Roanoke Island was now open to Union activity, and for the Confederates the great highway linking coastal shipping to the rivers of interior North Carolina was beginning to close.

A few months later, the Union assembled another fleet, this time for an attack on Roanoke Island. Since the fall of the Hatteras forts, the Richmond government had done little to strengthen the defense of Roanoke Island. There were three small earthen forts on the island, with a fourth position west of the island across Croatan Sound (north of the current Manns Harbor Bridge). Because the Confederate general staff was expecting a Union attack from the north, most of their artillery pieces were pointed in that direction and could not be turned to face an attack from the south, up Pamlico Sound. Due to the Confederate government's commitment to the defense of Richmond, only 1400 soldiers were made available to hold the strategically important island.

After struggling south from Annapolis, Maryland, through a series of winter storms, Union General Ambrose Burnside led a fleet of 67 ships and 13,000 men through Hatteras Inlet and dropped anchor off the western shore of Roanoke Island on February 5th, 1862. He landed 4000 soldiers at Ashby Harbor and after slogging through the swamps assaulted the Confederates' makeshift position near today's intersection of U.S. 64 and N.C. 345. On Croatan Sound, the South's five-vessel "Mosquito Fleet" harried the Union ships as best it could, but it was badly battered and quickly driven north out of range.

The island's inexperienced defenders fought tenaciously behind their earthen fortifications but were eventually outflanked and overwhelmed by Burnside's veterans. Few on either side were killed, and the Union forces eventually captured the entire Southern defense contingent.

The "Mosquito Fleet" temporarily escaped to the north, but was destroyed a few days later in a battle near Elizabeth City. The Union now controlled North Carolina's sounds and access to the state's interior shipping routes. It was a devastating loss. The Federal campaigns on the Outer Banks helped accomplish President Lincoln's goal of a blockade of the Confederacy's coastline, and helped foster cooperation and coordination between the Union's Army and Navy. Today, only one of the Confederate defensive site is accessible to visitors. Remnants of the ramparts near the U.S. 64-N.C. 345 intersection can be seen and parking is available about 100 yards south of the intersection.

The three island forts, either worn down over the years or washed away into Croatan Sound, are commemorated by historic plaques and street names throughout Roanoke Island. 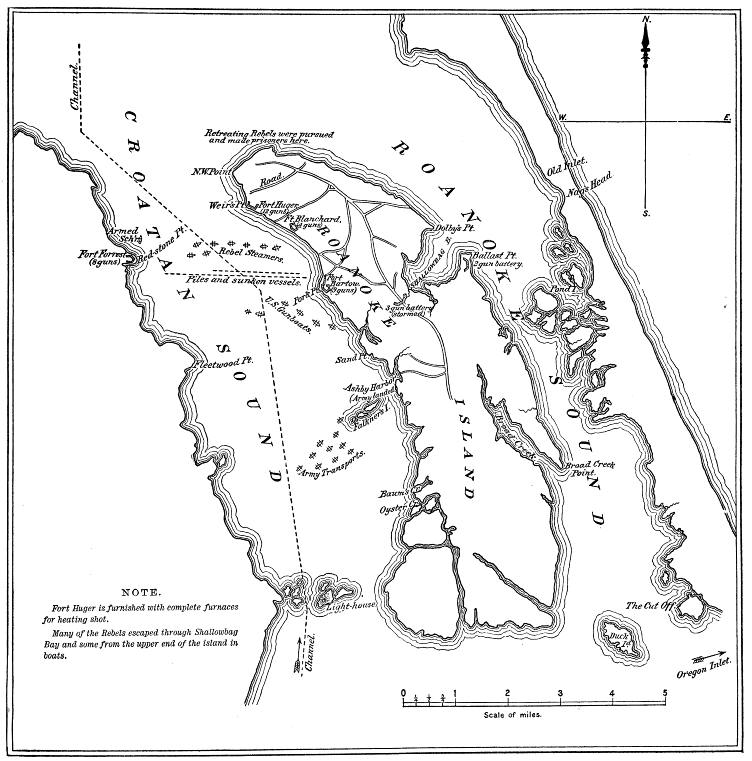