After June 17, 1972, the word "Watergate" could no longer be just the name of an office and hotel complex in Washington, D.C. On that date it became a byword for political corruption.

In the early hours of that mid-June morning, and in the middle of a presidential campaign, five men were arrested for breaking into the Democratic National Committee headquarters located in one of the Watergate offices.

The details of this story would form an ever-rising pool of political deceit in which swirled a constitutional crisis that claimed a presidency. 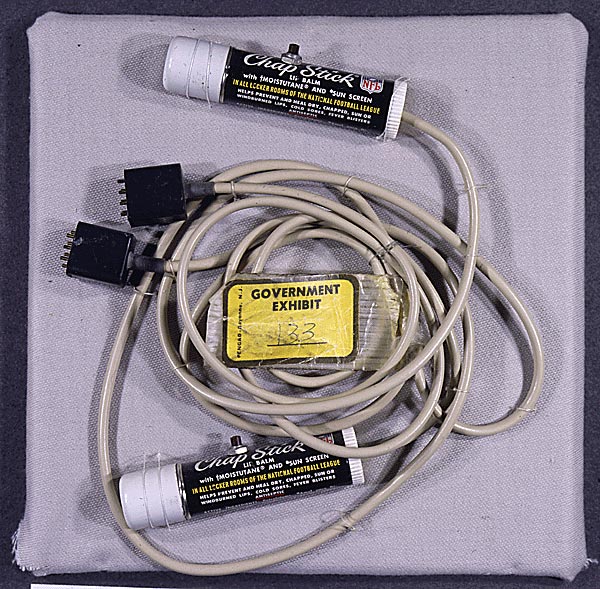 When Judge John Sirica gaveled the trial of the Watergate seven to order on January 8, 1973, federal investigators had already discovered a covert slush fund used to underwrite nefarious activities against Democrats. The money and the men on trial could be linked to the Committee to Re-elect the President (CRP) at whose head sat the former Attorney General of the United States, and President Nixon's former law partner, John Mitchell. At the trial, E. Howard Hunt, who had planned the break-in, and four of the burglars pleaded guilty. G. Gordon Liddy, who helped in the planning, and James McCord, the other burglar, refused to cooperate, were convicted of various charges, and sentenced to prison.

Shortly after the trial, the United States Senate formed the Select Committee on Presidential Campaign Activities, chaired by Senator Sam Ervin (D-NC). Meanwhile, James McCord, contemplating a long prison term, had a change of heart and wrote a letter to Judge Sirica. In it, he claimed that high White House officials had pressured the defendants to plead guilty. The five who pleaded had perjured themselves at the urging of "higher-ups." With the letter's release, the saga moved decidedly from being a police story to a political story. It slipped beyond Washington's beltway and captured national attention.

That January, Time magazine named President Nixon and his national security advisor Henry Kissinger "Men of the Year" for their diplomatic achievements with China. A year later Time would bestow that honor on Judge Sirica. 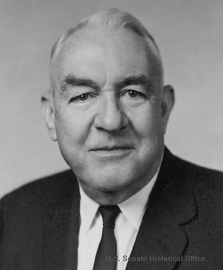 The seriousness of the Watergate matter was measured by the strength of the Senate's vote to create an investigative committee - 77 to 0. By the time it began its televised hearings in mid-May 1973, its chairman, the affable, homespun, Senator Ervin and his team of investigators were flanking the White House defense. James McCord was cooperating, and White House counsel to the president, John Dean, was a veritable fountain of allegations. President Nixon had fired Dean on April 30. That same day Nixon's chief of staff Bob Haldeman and Domestic Counsel John Ehrlichman had resigned because of their role in Watergate. And Attorney General Richard Kleindienst resigned stating he was incapable of prosecuting close friends.

In an attempt to mitigate the damage, Nixon named Elliot Richardson Attorney General. Following Nixon's instructions, Richardson announced on May 18, that the Justice Department was appointing its own special prosecutor, former Solicitor General Archibald Cox, to investigate possible administration misdeeds.

Meanwhile, the White House announced that the president had no prior knowledge of the Watergate matter. Yet Dean's testimony refuted that claim. He told a stunned Senate committee and, through the gathered media, an astonished public, that Nixon not only knew of the break-in, the president had directed in the cover-up. But how could such claims be corroborated?

The answer came on July 16, when Alexander Butterfield, a former White House appointments secretary, quietly and unexpectedly informed the Senate committee that a system of taping conversations and telephone calls was in place within the White House.

Battle for the tapes

Less than a week following Butterfield's revelation, Nixon ordered an end to White House taping. Shortly afterward, the Senate committee, Special Prosecutor Cox, and Judge Sirica ordered relevant tapes be turned over. Nixon refused, claiming executive privilege. By August the matter was in court. Nixon addressed the nation on August 15, 1973, explaining to the people why confidential conversations between the president and his advisors should not be made a matter of public record. Lawyers for the Watergate committee and Special Prosecutor's office argued that conversations dealing with matters of potential illegality should not be suppressed by claims of executive privilege.

On October 12, Nixon nominated Congressman Gerald Ford (R-MI) to fill the vacancy left by the resignation of Vice President Spiro Agnew following charges of bribery and tax evasion. That same day, the U. S. Circuit Court of Appeals in Washington ruled that Nixon must turn over the tapes to Judge Sirica. Knowing the implications and rather than comply, Nixon suggested a compromise, offering edited transcripts to the various investigating offices. Special Prosecutor Cox refused, and on the evening of October 20, a political bloodletting labeled the "Saturday Night Massacre" ensued. Nixon, angered by Cox's response, ordered Attorney General Richardson to fire the prosecutor. Richardson resigned rather than obey. Immediately afterward, Nixon ordered Richardson's assistant, William Ruckelshaus, to fire Cox. He, too, refused and resigned. Finally, Solicitor General Robert Bork was given the order and carried it out.

A hail of criticism pelted the White House, including calls for Nixon's impeachment. In the face of this outrage, Nixon relented and agreed to surrender the subpoenaed tapes. He then appointed Texas attorney Leon Jaworski to replace Cox.

Troubling revelations followed the release of the tapes. The White House claimed that some tapes subject to the subpoena did not exist. One contained an erased gap that stretched for over eighteen minutes. Nixon's secretary, Rose Mary Woods, and others in the White House offered conflicting accounts for what experts contended were five or more separate erasures. White House Chief of Staff Alexander Haig credited the gap to "some sinister force." Others outside the White House concluded key evidence had been deliberately destroyed.

When Congress reconvened in January 1974, following its Christmas break, the House of Representatives compounded Nixon's legal troubles. On February 6, it authorized the Judiciary Committee to investigate grounds for the impeachment of President Nixon. This added to investigations already underway by Judge Sirica and the grand jury, Special Prosecutor Jaworski and the Justice Department, and the work done by the Senate select committee on Watergate.

The legal noose tightened on March 1, when the United States District Court for the District of Columbia handed down a thirteen-count indictment against seven former White House aides, including Haldeman, Mitchell, Ehrlichman, and Charles Colson, for hindering its investigations. More damaging politically, Nixon himself was named an "unindicted co-conspirator" by the grand jury.

In April, responding to Jaworski's demand for more tapes, the White House released edited transcripts. Nixon again appeared on TV to explain his stand against releasing the tapes. While not surprised by Jaworski and the judiciary committee's insistence on receiving the actual tapes, the public was repulsed by the president's language in the transcripts. The term "expletive deleted," replacing coarse swearing, became an oft-repeated phrase in evening news casts and newspaper stories.

By May 9, 1974, the House Judiciary Committee began hearings on articles of impeachment. Judge Sirica turned over to the committee evidence gleaned against Nixon by the grand jury. Meanwhile, Jaworski appealed to the Supreme Court to force Nixon to surrender more tapes. On July 24, the Court handed down an 8-0 decision, laying bare the president's last line of defense.

In late July, the House committee drafted three articles of impeachment against Nixon:

This bold move, combined with the decision of the Supreme Court, forced Nixon's hand. On Monday, August 5, he released tapes of three conversations between himself and Haldeman recorded six days after the break-in. The text showed the president obstructing justice by ordering the FBI to end its investigation of the break-in. At the Cabinet meeting the next day, Vice President Ford stated that, as "a party in interest," he would have no further public comments on the issue. 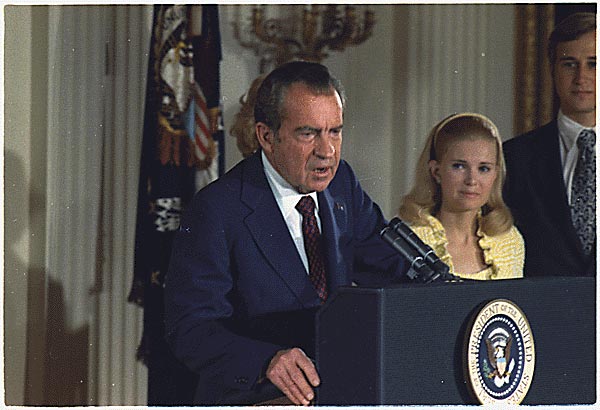 Nixon's remaining support in the House and Senate crumbled. With impeachment certain in the House and the outcome of a trial in the Senate in little doubt, three leading Republicans paid Nixon a visit at the White House. They told him of his dwindling chances on the Hill. "You all agree that it looks bad," Nixon asked. Each concurred. "I'm going to make up my mind very shortly," he told them. The following day, August 8, Nixon announced in a broadcast to the nation his decision to resign the presidency at noon the next day. His terse letter of resignation was delivered to Secretary of State Henry Kissinger at 11:53 AM on August 9.

At noon on August 9, in an East Room ceremony in the White House, Gerald Ford was sworn in as the nation's 38th president. In taking the oath of office, Ford spoke words of relief and assurance. "My fellow Americans, our long national nightmare is over. Our Constitution works; our great Republic is a Government of laws and not of men. Here the people rule.

"The new president faced many difficulties. Besides having to handle the continuing legal and political concerns surrounding Richard Nixon, domestic and international challenges thrived. Also, the war in Vietnam lingered and the selection of a vice president demanded attention. With the need to put the Nixon ordeal behind him, and to give his full attention to the grave economic and foreign policy matters, Ford reached a decision. In a surprise announcement made to the nation on September 8, Ford granted the former president a "full, free and absolute" pardon for "all offenses against the United States" committed between January 20, 1969 and August 9, 1974.

Although his pardon of Richard Nixon was very controversial and probably was a factor leading to his loss in the 1976 presidential election, Gerald Ford never second-guessed his decision to grant it. Acting as his conscience dictated, he did not worry about political consequences. Although the initial reaction to the pardon was overwhelmingly negative, in recent years many original opponents of the pardon have reconsidered Ford's decision. On May 21, 2001, President Ford received the John F. Kennedy Profile in Courage Award at the Kennedy Library. Speaking on this occasion, Caroline Kennedy Schlossberg said of President Ford, "As President, he made a controversial decision of conscience to pardon former President Nixon and end the trauma of Watergate. In doing so, he placed his love of country ahead of his own political future."

Excerpted from the online exhibit The Watergate Files.

In the early hours of that mid-June morning, and in the middle of a presidential campaign, five men were arrested for breaking into the Democratic National Committee headquarters located in one of the Watergate offices.

The details of this story would form an ever-rising pool of political deceit in which swirled a constitutional crisis that claimed a presidency." data-share-imageurl="">