Work in a Textile Mill

Integrated cotton mills were "designed to move cotton through a precise series of production processes that separated, straightened, and twisted cotton fibers, combined them into yarn, then wove the yarn into cloth. Manufacturing began in the opening room, where workers removed the ties and bagging from bales of raw cotton. Because of the dust and dirt and the ever-present danger of fire, this room was often located in an adjacent warehouse or in the basement of the mill. The opening machine tore apart the compressed cotton, removing dirt and short fibers. As the cotton was fluffed, a vacuum system carried it through a giant tube to the picker room, where pickers -- or lappers as they were also known -- continued to clean the cotton and organize it into continuous, even sheets. Card hands then fed these sheets into carding machines, where sharp metal teeth again tore apart the cotton, removing any remaining twigs or dirt, and converted the mass into a continuous sliver, or loosely compacted rope, that coiled into cans."1

"The fibers in the sliver were almost parallel, but because the cotton tended to twist and curl, it needed more processing. Workers directed four or more slivers through a series of rollers in the head of a drawing frame, where they were combined in a single strand. Since each set of rollers ran at increasing speeds, the drawing frame straightened -- or drew out -- the sliver and made it thinner. To ensure the permanent union of the fibers, the yarn was then subjected to roving, where it was slightly twisted, and to spinning, where the fibers were wound still more tightly around one another. As bobbins on the spinning frames filled with thread, doffers replaced them with empty ones. The spinner's job was to move quickly up and down a row of machines, repairing breaks and snags."2

"Spoolers ran machines that combined the thread from ten to fifteen different bobbins. Operating a spooling frame was relatively simple, but problems resulted when the threads broke. At this stage broken ends could be repaired only by tying them with a knot rather than simply twisting them together. If a stronger or larger yarn was desired, single threads were twisted together to produce multi-ply yarn. A final step, winding, prepared the yarn for its various uses. It could be wound into balls for sale, put into cops for the weaver to use in the shuttle of a loom, or wound on cones, tube, cheeses, or reels for later processes in the mill."3

"The production of cloth began in the weave room. Yarn that ran lengthwise, called warp, was interlaced with yarn running crosswise, called filling or weft. The first step was the preparation of the warp, as workers mounted yarn from the winder on a large frame called a creel. They directed the threads from each cone through individual parallel wires onto a rotating beam. The yarn from several beams was combined, dipped into a bath of hot starch and oil, dried over steam-heated drums, and wound onto a giant spool known as a loom beam."4

"Before weavers placed the beam on a loom, draw in hands laced each warp thread through individual eyes in the harness. The harness raised and lowered threads in the warp, separating them to allow for the introduction of the weft."5 "Once 'drawing-in' was completed, weavers put the beam and harness on the loom, which could be very simple or very elaborate depending on the type of cloth desired. A simple loom had two harnesses, one that raised a section of the warp and another that lowered the section. The shuttle, which contained the weft, passed between the openings in the warp and the union of warp and weft was completed as the reed beat the filling back against the previously woven cloth. The harnesses then changed position and the process continued until the desired length of cloth was produced. This type of loom made simple cloth like sheeting, but more complicated looms produced fabric with an almost infinite variety of patterns and designs."6

The experiences of mill workers

First-generation millhands had to adjust from the rhythm of life on the farm, where the worked for themselves and according to the pace of the seasons, to the rhythm of the factory, where they worked for someone else's profit and synchronized their labor to the steady and quick pace of machines. Most millhands went to work early in the day and labored for ten to twelve hours straight, amid deafening noise, choking dust and lint, and overwhelming heat and humidity.

Families usually began mill work together, since employers paid adults poor wages and offered jobs to children to help make ends meet. "In this way, mills attracted a core of mature workers at low cost along with younger, even cheaper, laborers who could perform simple tasks and move in and out of the mills in response to market fluctuations."7 Critics opposed child labor and mill owners were often of a divided mind on the subject, but children remained an integral part of the labor force. Between 1880 and 1910, about one-fourth of all cotton mill workers in the South were below the age of sixteen.

Children grew up in homes regulated by the mills' schedule. Mothers brought nursing infants to work or adjusted feeding schedules around breaks in the factory day. Older children came and went in the mills as they pleased, bringing meals to parents and learning to do factory labor as they played with friends in the factory. Sometimes young children assisted parents or older brothers and sisters with their work, increasing the wage earner's paycheck while also learning skills that they would use as employees in their own right years later. Most children entered full-time work in the mill by age twelve, dropping out of school or moving between school and work as necessity dictated.

When new workers started their jobs, they often labored for up to six weeks without pay during a learning period. Children usually started in the entry-level jobs of spinning, spooling, or doffing. Often the heaviest work went to African American men, who moved large bales of cotton, loaded wagons or rail cars with finished goods, and worked amid the dirt and dust of the opening and picking rooms. Black women were excluded from mill work altogether. The spinning room was almost always female-dominated, and women sometimes also worked as weavers or drawing-in hands. Boys were usually employed as doffers or sweepers, and men worked as weavers, loom fixers, carders, or supervisors.

Mill workers usually worked six twelve-hour days each week. The jobs that went to adult white men tended to pay the best, followed by jobs worked by white women, jobs that employed black men, and, finally, jobs performed by children. Wage rates increased over time, but Southern millhands still made considerably less than northern textile workers. Below is a table showing the average weekly wages paid for a variety of jobs in North Carolina mills in 1904.

Workers endured difficult working conditions and significant health risks. Constantly breathing in cotton dust contributed to lung problems such as byssinosis, or as it was more commonly known, "brown lung." Workers could also be severely injured or killed on the job when fingers, limbs, or clothing became entangled in the rapidly moving machinery. When workers did get sick or injured, there was no insurance or worker's compensation to aid them in their recovery.

Workers often had time to socialize on the job, singing together or gathering to talk on lunch breaks or when production slowed down or stopped due to machine failures. Occasionally, workers would play pranks on each other on the job, and some workers could find the time to sit down, rest, get a drink of water, or chat between tasks. But mill work usually required too much concentrated attention for such diversions. Mill owners sought to get the maximum amount of labor from their employees and used supervisors to regulate each department.

The disjuncture between mill owners’ desire for maximum effort and mill workers’ desire to regulate for themselves the pace of their labor and to enjoy a greater share of the profits it generated led to serious labor tensions. In the 1890s, the National Union of Textile Workers (NUTW) held meetings in most of the major textile areas of the Carolina Piedmont, organizing ninety-five locals by 1900. The NUTW, however, was not powerful enough to compel mill owners to cooperate with workers and, by 1902, only a handful of the locals remained. The tensions that spurred the beginnings of union activity in the South, however, did not disappear and would reemerge a few years later.

Leloudis, James and Kathryn Walbert. "How Textile Mills Worked." Originally published in "Like A Family," http://www.ibiblio.org/sohp/laf/factory.html#how.

From the print publication: 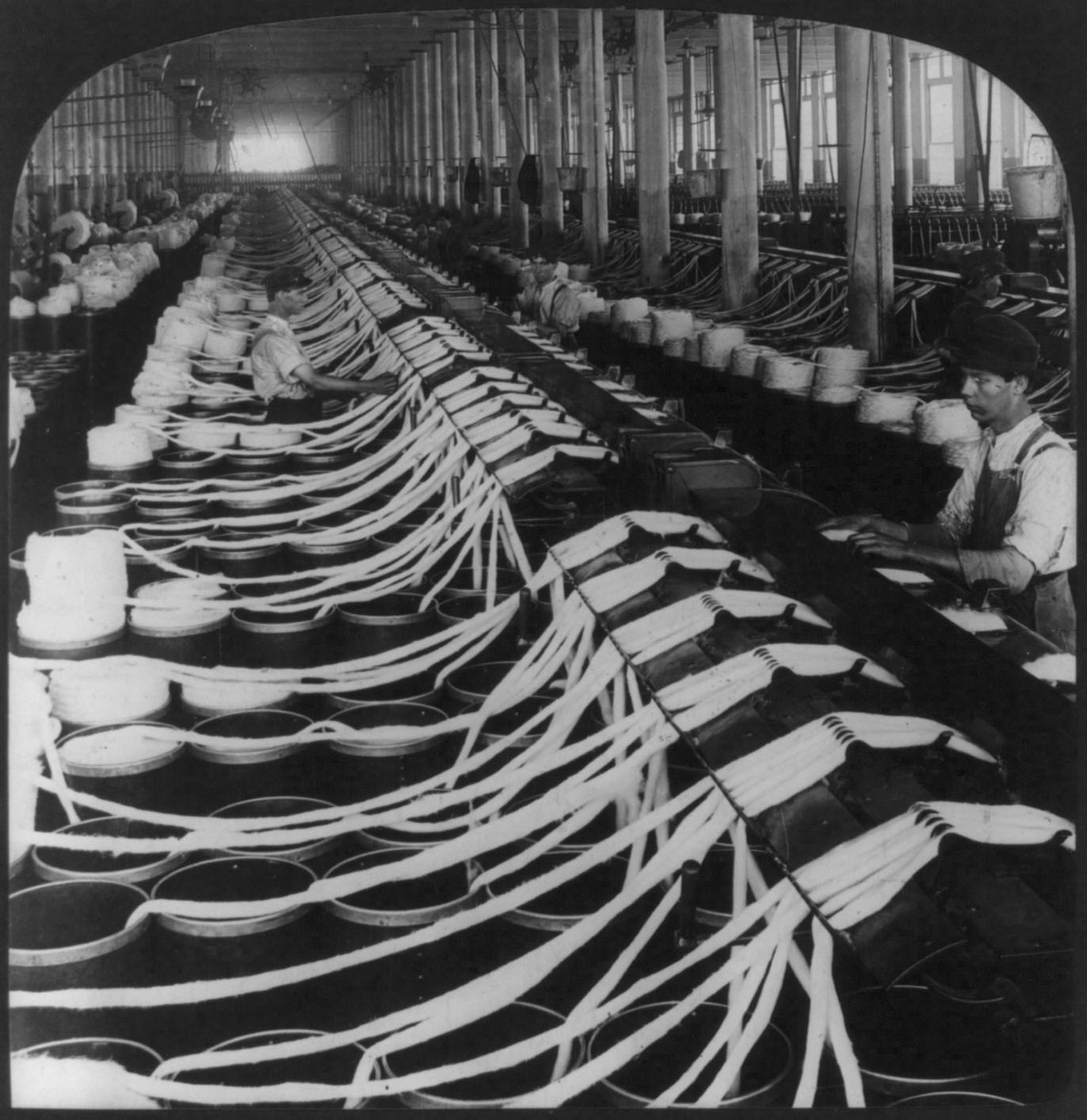 A worker at White Oak Mills in Greensboro makes yarn, 1907. 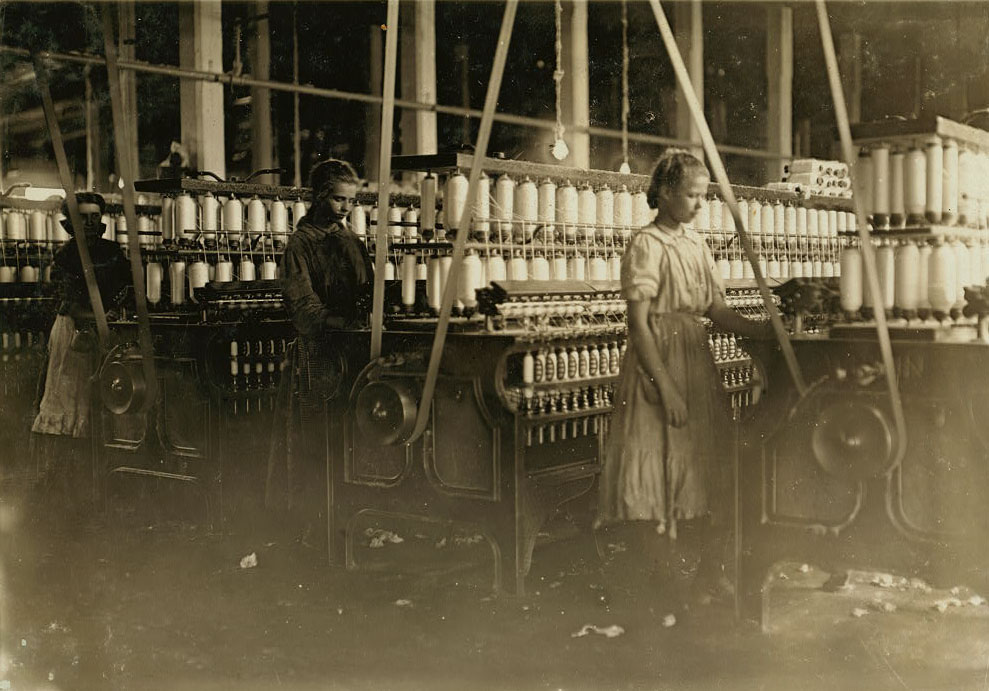 Children usually worked in textile mills along with their parents. The title of this photograph identified these children as “some of the larger spinners in Catawba Cotton Mills, Newton, N.C."