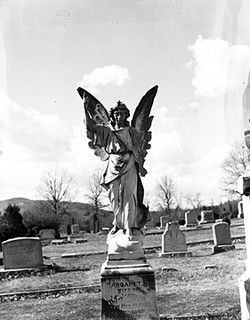 The existence of angels, spiritual beings believed to be similar to human beings but without corporeal bodies, has been proposed by practically all peoples from the earliest days of human awareness. Presumed likenesses or emblems of angels have been found in crude native art as well as in the most refined forms of Western sculpture, painting, and music. Angels are not bound by creed or philosophy but have a place in the beliefs of Christians, Jews, Muslims, and other faiths.

Following the Moravians' settlement of the Wachovia and Salem communities in North Carolina beginning in 1753, angels and the acts they performed in the lives of people were frequently mentioned. Many of these instances are recorded in the published Records of the Moravians (edited by Adelaide L. Fries and others). On the morning of 21 Jan. 1773, for example, Jacobus van der Merk said that he would "go home [that is, die] this evening about six o'clock . . . that many angels would be present, that he had already seen in his room, dressed in a beautiful white robe, the little Jacob Blum, who went home some years ago and he would like to be able himself to take part in the last blessing." At Bethania in 1775 angels purportedly guarded the people from various dangers; the Salem Memorabilia in 1778 reported that correspondence with Moravians in Bethlehem and Lititz, Pa., came safely to hand through the protection of angels. In 1861 some children from Bethania went into the woods to look for Christmas greenery and one of them became lost. Some men later found the girl concealed under a tree; she told them an angel had protected her from panthers known to have been in the vicinity.

Angels have also appeared in the artistic efforts of North Carolinians, including the poem "Angel in the Cloud" (1871) by Edwin W. Fuller and the novel Look Homeward, Angel (1929) by Thomas Wolfe. A magnificent bronze memorial near the center of downtown Salisbury depicts a natural-size angel raising a Confederate soldier. In 1958 angels were referred to by Billy Graham, a North Carolina Christian evangelist, as "God's secret agents."

Do you think people would be

Do you think people would be offended about this?