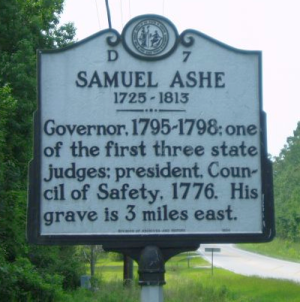 Samuel Ashe (1725-1813), prominent leader for the Patriot cause, was born near Bath to parents of considerable wealth, social status, and political influence. His mother, the former Elizabeth Swann, was the daughter of Samuel Swann, prominent planter and long-time member of the colony’s executive council. Ashe’s father, John Baptista Ashe, was a prominent planter and speaker of the North Carolina House of Commons. Orphaned soon after his family’s removal to the lower Cape Fear region, young Ashe was reared to maturity in the elegant plantation home of his maternal uncle, Samuel Swann, himself speaker of the North Carolina assembly for nearly two decades. There he benefited from the best in educational opportunities and from cultured and cosmopolitan surroundings. Ashe was first married to a cousin, Mary Porter, by whom he had three sons. His second marriage was to Elizabeth Merrick.

After entering the practice of law, Ashe gained prominence as an assistant attorney for the Crown. Despite this background, however, he became actively involved in the Stamp Act resistance and played a leading role in the radical Sons of Liberty organization. When Governor Josiah Martin refused to convene the legislature in 1774, Ashe was one of eight prominent patriots to organize the revolutionary provincial council at Johnston Courthouse. During that same year he became active in the North Carolina Council of Safety, serving briefly as president in 1776. As a leading delegate to the provincial congress, Ashe was appointed to the committee that drafted the state’s original constitution at Halifax in 1776. In April of the following year, he served as speaker of the Senate during the first meeting of the General Assembly under that document. Still later, he was appointed by that Assembly to a superior court judgeship, a position which he occupied with distinction for nearly twenty years. In 1787 he was one of three judges to decide the landmark case of Bayard v. Singleton, which asserted the constitutional doctrine of legislative review.

On November 11, 1795, the seventy-year-old Ashe resigned his judgeship in order to accept his election as governor. Reelected on two subsequent occasions, he served the constitutional maximum of three consecutive years. Although earlier a Federalist, Ashe had since become an ardent Republican and a supporter of states’ rights. It was therefore only with difficulty that he weathered the storm of pro-Federalist, anti-French feelings that arose along the coast and swept through maritime and commercial circles in 1797-1798. The feelings were brought about by repeated French violations of America’s neutrality, the seizure of her ships, and the mistreatment of her seamen. Indeed, a Wilmington brawl involving crewmen from a French privateer resulted in the death of one American seaman and a sense of outrage throughout the state.

It was during the last year of Ashe’s administration that information began to surface regarding massive land frauds in that portion of North Carolina that had become Tennessee. Ashe cooperated fully with the early phases of the investigation of those frauds, and helped to prevent the destruction of crucial evidence. Ashe died at “The Neck,” his plantation, on February 3, 1813, and was interred there on the grounds.

I believe Samuel Ashe is my