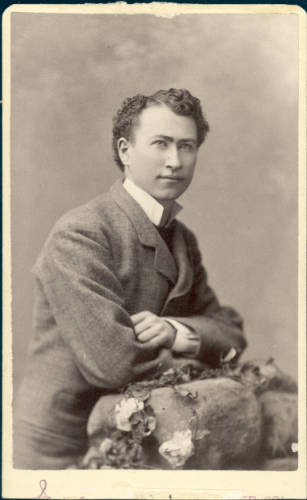 Elias Milton Ammons, rancher, legislator, and Colorado governor, was born in Macon County. His parents, Jehu R. Ammons and Margaret C. Brendle, both traced the American origins of their families to the colonial period. When Elias was eleven, the family migrated westward, settling in Denver, Colo. There the boy found it necessary to work for four years as a spindle feeder in the Denver Woolen Mills, as a teamster in a lumber camp, and as a lamplighter, before completing his education at East Denver High School. After his graduation in 1880, he secured a job with the Denver Times, where he worked for four and a half years. He progressed steadily in journalistic ability and responsibility, rising to an assistant editorship, but failing eyesight forced him to turn to another profession. He chose cattle ranching.

Within a few years, having established himself as a rancher, the young man turned to politics as an additional outlet for his energies. His first political post was a minor one, clerk of the district court of Douglas County in 1890. That same year, running as a Republican, Ammons won election to the Colorado House of Representatives, so he resigned the clerkship. He served four years in the house, the last two as speaker. With the emergence of the free silver question on the national scene, he grew disaffected with the Republican leadership's espousal of the gold standard. Joining a group of similarly disenchanted Republicans led by Senator Henry Teller, he ran for election to the state senate as a Silver Republican and won. Two years later he was reelected. Increasingly finding his views incompatible with his original party affiliation, he left the Republicans entirely and enrolled in the more amenable Democratic party.

In both 1904 and 1906 the physically frail and almost blind Ammons campaigned for state-wide office. Both years he ran for lieutenant governor on a ticket with Alva Adams as the gubernatorial candidate; both years he lost. The 1904 verdict proved particularly bitter when an apparent Democratic victory was reversed by the revelation of electoral frauds in the Denver area.

By 1912, however, Ammons soared to the peak of his political career. Aided by the division of the normal Republican vote between a regular party nominee and a Progressive candidate, the rancher glided to victory in the race for governor on a forty-nine thousand vote cushion. His term in office began routinely. He sponsored legislation to improve laws governing public utilities, insurance, and banking; to revise the tax system; to provide for coal mine inspection; and to prepare a more comprehensive plan for state highway development. As he had done throughout his public career, he spoke out against federal conservation measures that in his opinion deprived the states of their rights to develop their natural resources as they saw fit. After September 1913, most of his remaining year and a half as governor was occupied by a massive, disruptive coal strike.

Following a long series of sporadic attempts to unionize the Colorado mine fields, John R. Lawson led an all-out United Mine Workers' effort to organize the state's southern coal mining region. When strikers physically resisted the operators' use of scabs, the owners appealed to Ammons for assistance in maintaining production. The governor ordered the state militia to their aid. Soldiers and miners scuffled repeatedly during the protracted struggle. Finally, on 20 Apr. 1914, after another confrontation, militiamen drove miners and their families from their tent camps at Ludlow and burned the camps. In the ensuing melee, five miners and one soldier were killed and two women and eleven children burned or suffocated in the fire. The incident fused a ten-day outbreak of violence characterized by burnings, dynamitings, and murders. Ammons and the state troops were unable to control the situation; U.S. troops were called in to restore order. The federal soldiers quelled the violence, but the strike continued. The governor was subject to virulent public condemnation. Legislators called for his impeachment. Although a motion introduced in the legislature demanding his resignation was quashed by a vote of 26 to 4, Governor Ammons's reelection hopes were shattered. When the Democratic party met to nominate candidates for the 1914 campaign, he was completely ignored. The coal strike dragged on until December, and the governor played no significant role in its final settlement.

At the expiration of his term, Ammons returned to his ranching and business enterprises. Since 1886 he had worked actively in the interests of Colorado farmers, holding membership in the Grange, the Farmers' Union, and the state board of agriculture and assisting in the establishment of the Colorado Cattle and Horse Growers' Association and the National Western Stock Show at Denver. He continued his activity as president of both the Farmers' Life Insurance Company and the Middle Park Land and Livestock Company and as vice-president of the agricultural board. In addition, he remained active in other civic affairs, serving, for instance, in the closing years of his life, as president of the Denver Chamber of Commerce and of the State Historical and Natural History Society.

Ammons was survived by his wife of thirty-six years, Elizabeth Fleming Ammons.