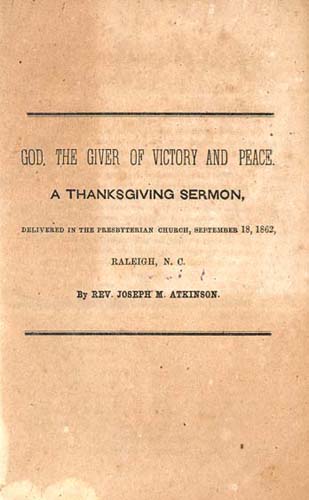 Joseph Mayo Atkinson, Presbyterian clergyman in Raleigh for thirty-five years, was one of the eleven children of Robert and Mary Tabb Mayo Atkinson of Mansfield, Dinwiddie County, Va., and one of four brothers who became clergymen. An elder brother, Thomas, became the third Episcopal bishop of North Carolina. Another, John Mayo, served as president of Hampden-Sydney College, Va., from 1857 to 1883. After following briefly in the steps of his brothers at Hampden-Sydney College, Joseph transferred to the College of New Jersey, now Princeton, from which he was graduated in 1841. He entered Princeton Theological Seminary and completed his studies in 1843.

Although his father and elder brothers remained Episcopalians, Joseph joined in the growing influence of the Presbyterian church over all things religious in the South. He was licensed to preach by the Winchester Presbytery in 1843 and ordained elder by the same body two years later. From 1843 until 1849, he served as pastor of small churches in Sheperdstown and Smithfield, Va. In 1849, however, he moved to a much larger church in Frederick, Md. His successes in Maryland and the presence of his brother Thomas as resident Episcopal bishop in Raleigh paved the way for his election as pastor of First Presbyterian in Raleigh in 1855. In that important pastorate he succeeded Drury Lacy, who had just been elected president of Davidson College. After twenty years at First Presbyterian, Atkinson's health gave way, forcing him into the semiretired life of a high school teacher. By 1877 he was sufficiently recovered to take on the pastorate of the Second Presbyterian Church in Raleigh, where he remained until 1890. Following a year of retirement, Atkinson died at Warrenton.

Like his brother Thomas, Joseph Mayo Atkinson disliked slavery and dreaded southern secession. Yet, also like his brother, once the Civil War began, he came to the defense of slavery and the Confederacy. In one of the most ringing sermons heard in Civil War North Carolina, Atkinson on 18 Sept. 1862 celebrated Confederate military successes by declaring, "Never in the history of mankind has the wonder-working providence of God been more strikingly manifest than in the successive phases of this contest." Among those who convinced southerners that they were fighting a war of self-defense, Atkinson argued that the South "is now making for herself a name which shall be gratefully and admiringly murmured wherever freedom has a friend or the God of Providence a worshipper." In addition to stirring up the home front, Atkinson wrote tracts for the consumption of the southern soldiery. He had already demonstrated an interest in guiding the lives of young men with his 1860 publication of a series of lectures entitled The True Path.