Henry Bacon, Jr., architect of the Lincoln Memorial, Washington, D.C., was born in Watseka, Ill., one of seven children of Henry (1822–91) and Elizabeth (1831–1912) Bacon of Massachusetts. Henry Bacon, Sr., an engineer, worked with the development of the Illinois Central Railroad before moving to the Wilmington office of the U.S. Engineer Department. The Bacon family lived in Southport (then Smithville) from 1876 to 1880, nearer the site of Bacon's work than the Wilmington office, but in 1880 they moved to Wilmington.

The elder Bacon was in charge of the construction of a barrier dam across New Inlet, near the mouth of the Cape Fear River. New Inlet, cut by a severe storm in 1761, formed a second mouth to the Cape Fear. Young Henry's interest in engineering and architecture must have been stimulated by his father's work. His later understanding of the engineering problems of anchoring the Lincoln Memorial in fill land reclaimed from the Potomac River and his success with this difficult problem probably owe much to his knowledge of the work of Henry Bacon, Sr., on the Cape Fear River.

Henry Bacon, Jr., was probably already attending school in Wilmington in 1880 when his family moved there from Southport. He went to study at Chauncey Hall School in Boston in 1881, at the age of fifteen, but returned to Wilmington, where he was graduated from Tileston High School in 1884. The same year he entered the University of Illinois; after one year he left to take a position as draftsman for the architectural firm of Chamberlain and Whidden in Boston.

In 1885, Bacon moved to New York to work with the firm of McKim, Mead and White, probably the most prestigious and innovative architectural firm of its era. In 1889 he won the coveted Rotch Travelling Scholarship. By that time he had so thoroughly established himself at the McKim firm that his winning seems to have been a foregone conclusion.

With the award, Bacon began two years of travel, study, and sketching in Europe. His scrapbooks and drawings from the era cover architectural details and motifs viewed in France, Italy, Greece, and Turkey. During his study, Bacon visited the archeological site at Assos, Turkey, near Troy. An older brother, Francis H. Bacon (1856–1940), had worked there from 1881 to 1883 as chief draftsman for the Harvard archeological expeditions. When the expedition findings were published in 1902 and 1921, Francis was given credit not only for the editing and writing of the explanatory notes, but for most of the plans, elevations, details, and restoration drawings. Included among the drawings was one for the Tomb of Publius Varius by Henry Bacon. Francis later became a furniture designer and maker in Boston, and Henry used his products in furnishing several of the buildings he designed. 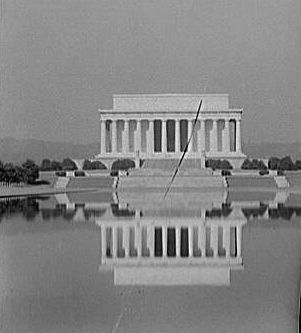 It was during the time spent in Assos that Henry met Laura Calvert, daughter of the British consul at the Dardanelles, near Assos. They were married, and another Calvert daughter became Francis's wife.

Henry Bacon returned to employment with McKim, Mead and White in 1891 and the following year spent six months in Chicago as McKim's personal representative at the World's Columbian Exposition. While working for McKim, Bacon designed the exposition's Pennsylvania Railroad Building (1891), his first independent commission.

Bacon continued to work with the McKim firm until 1897; at that time he went into partnership with James Brite, who had traveled in Europe with him during part of the Rotch Scholarship study. Brite and Bacon maintained their partnership until 1903, when the firm was dissolved, and each established his own practice.

In 1911, Bacon was appointed architect for the Lincoln Memorial in Washington. His design was accepted in 1912, and the work was completed between 1913 and 1922, when the memorial was dedicated.

Bacon had been sought by McKim in 1901 to work with the McMillan Commission in evolving a new plan for Washington. Because he was then involved in competition for the design of a new Department of Agriculture building, he could not accept the task. He remained the prime choice of McKim, Daniel Burnam, and Augustus Saint-Gaudens, all members of the McMillan Commission. After winning the Lincoln Memorial design commission, he worked with Burnam and others in designing the Reflecting Pool (ca. 1922) between the Washington Monument and the Lincoln Memorial. He also designed a street lighting system for the city (1923); the light standards used throughout most of Washington today are from his design. Bacon seems also to have been the commission choice for other Washington buildings, but he died before he could undertake other jobs.

The Lincoln Memorial design won Bacon national renown and a gold medal from the American Institute of Architects, the highest honor the organization could bestow. A superb engineering and architectural feat, the design, featuring a Greek temple with Roman attic, is generally considered the most successful of the Washington Mall monuments.

In announcing the gold medal, the AIA noted that "for the third time in its history the institute will present the gold medal to one of its members." Only Charles F. McKim in 1909 and George B. Post had received it previously. For the presentation to Bacon, during the 1923 AIA Annual Meeting, the institute devised a pageant unequaled before or since in its history. On a rainy April night, Bacon rode from the Washington Monument end of the Tidal Basin to the Lincoln Memorial end on a specially constructed barge. Special lighting had been devised for the barge and for architectural students who pulled it. At the end of the barge ride, Bacon was greeted by Chief Justice of the Supreme Court William H. Taft and escorted to the memorial, where President Warren G. Harding presented the medal amid appropriate music and speeches.

During the last ten years of Bacon's life, even while he was at work on the Lincoln Memorial and other projects, he was employed in campus planning and building design at Wesleyan University, Middletown, Conn. The university awarded him an honorary M.A. in 1920 and today displays a large collection of his work in the several campus buildings he designed. The university also houses his library and the largest single collection of his drawings, plans, elevations, sketches, scrapbooks, and letters. 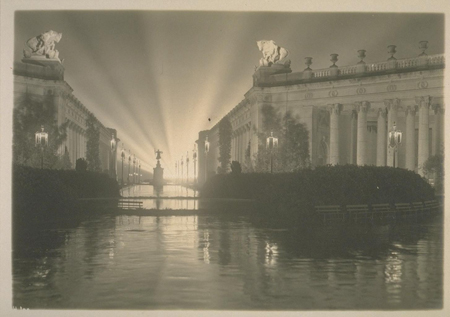 Throughout his life, Bacon maintained close contact with family and friends in Wilmington. In 1923 he spent Christmas with his family there and then returned to New York, where, in February, he entered the hospital for an intestinal cancer operation and died a few days later.

Bacon's body was returned to Wilmington for family burial there in Oakdale Cemetery. His grave marker is a design from his drawing (1907) of a stele from the Troad, now in the Boston Museum of Fine Arts.

In Wilmington, Bacon designed the shingle-style Donald MacRae Residence (1902) at South Third and Dock Streets, now the church offices of St. James Episcopal Church. In 1903 he remodeled the Hugh MacRae residence (now demolished) on Market Street. The Boney or Confederate Monument (1924) at Dock and South Third, by F. H. Packer, was designed in collaboration with Bacon, though it was erected after his death.

The Walter Parsley Residence (1915), Live Oaks, on Masonboro Sound in New Hanover County survives, as does All Saint's Episcopal Church (ca. 1910) in Linville, Avery County. The church seems to have set the design for other buildings nearby, which show Bacon's obvious influence. On Capitol Square in Raleigh, Bacon was the architect for the Women of the Confederacy Monument (1913), for which Augustus Lukeman was sculptor.

Bacon was not particularly interested in residential design. He designed Chesterwood (1900), Stockbridge, Mass., for his friend and fellow worker Daniel Chester French. The North Carolina residences were also for family or friends. He designed few other dwellings.

That there is not more work by Bacon in North Carolina reflects not so much a lack of recognition by the state he considered his home as his working methods. He seemed reluctant to seek commissions and maintained only a small office, preferring to supervise personally the commissions he undertook.

Hi, I am involved in a

Hi, I am involved in a project to erect a historical marker for Henry Bacon in his birthplace - Watseka, IL. I was wondering if you are aware of any of Henry's decendents? I would like to contact them to see if they are interested in atttending the dedication ceremony. Thanks.

I am forwarding this question to reference librarians at the NC Government & Heritage Library. A librarian will contact you by email to help suggest resources that might help locate descendents.  Unfortunately, NCpedia does not have any specific information that will help with this question.