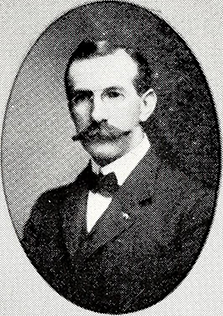 John Thomas Johnson Battle, physician, was born in Wake Forest. His father, John Applewhite Battle, was a farmer. His mother was Anne Mariah Capell. Battle attended Wake Forest College from 1872 to 1879, graduating in 1879 with an M.A. From 1879 to 1882 he was a medical student at Earpsboro, probably under his brother Adolphus James, who had attended Wake Forest College and was a doctor in Earpsboro. He received his M.D. from the College of Physicians and Surgeons, Baltimore, Md., in 1884 and took postgraduate courses at Johns Hopkins and New York Polyclinic. He returned to North Carolina and practiced medicine in Wadesboro from 1894 to 1898.

Battle served his profession as a member of the state board of medical examiners from 1902 to 1908 and of the Guilford County Board of Health from 1911 to the time of his death. He was responsible for the hiring of the first full-time county health officer in North Carolina. He was a member of the American Medical Association, the North Carolina Medical Society, and the Association of Life Insurance Directors of America; in May 1939 he was elected president of the Wake Forest Medical alumni. Battle was also a pioneer in the organization of the American Life Convention. At a meeting held in St. Louis, Mo., in January 1905, he was appointed to the committee on organization, and his committee recommended that a permanent organization be effected. Almost singlehandedly, he checked an epidemic of typhoid fever afflicting over one hundred of the children in the Baptist Orphanage at Thomasville in 1904–5; he responded to a phone call after two children had died and, leaving everything in Greensboro, moved to Thomasville and worked for almost two months until the disease was under control. Battle continuously stressed the need for public health measures and waged a relentless war against the fly.

Battle was a firm believer in the importance of a Christian education. He assisted many students to obtain educations at Woman's College, at Southern Baptist Theological Seminary, Louisville, Ky., at Wake Forest College, at Hartford Seminary Foundation in Connecticut, and, especially, at Meredith College in Raleigh. Battle served as trustee at Wake Forest from 1904 to 1927 and at Meredith College from 1911 to 1940. He was an active participant in the establishment of Bowman Gray School of Medicine in Winston-Salem. He gave $10,250 to Meredith for scholarships in 1937, and, at his death, benefits to the college totaled $30,000. He gave many of his books to the Bowman Gray Medical Library and $17,000 in stock to Wake Forest College. Meredith College honored Battle by naming a gymnasium for him.

Battle was a Baptist and joined the First Baptist Church of Greensboro when he moved there in 1898. In 1907 he transferred to Forest Avenue, now College Park Baptist Church. He served the church as deacon, Sunday school superintendent, chairman of the board of trustees, and chairman of the building committee for a new church edifice. While at Forest Avenue Baptist Church, Battle organized, and was scoutmaster for, one of Greensboro's first Boy Scout troops. His will left the church $5,000 in cash and several lots in the Greensboro area.

Battle was also active in civic endeavors. He was chairman of the Guilford County Draft Board and the Ninth District Selective Service Advisory Board during World War I, after trying to enlist at the age of fifty-eight. He was a lifelong Democrat, a Mason, and a loyal member of the Sons of the American Revolution.

Battle married Dora L. Burne from Wadesboro in 1896. She died on 14 Feb. 1936. They had no children, and Battle had no close relatives when he died. He was buried in Wake Forest.

John Thomas Johnson Battle, M.D.; a living memorial. Some interesting facts about a notable citizen that are motivating friends in Greensboro to do him suitable honor. By Walter Clinton Jackson; Meredith College (Raleigh, N.C.): https://www.worldcat.org/title/john-thomas-johnson-battle-md-a-living-memorial-some-interesting-facts-about-a-notable-citizen-that-are-motivating-friends-in-greensboro-to-do-him-suitable-honor/oclc/15434694