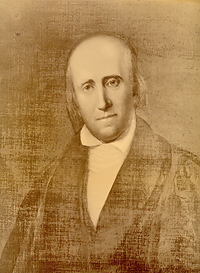 Frederic Beasley, Episcopal clergyman and philosopher, was born near Edenton, the son of John Beasley and Elizabeth Blount Beasley. His mother was a sister of James Blount, owner of Mulberry Hill, and a member of the wealthy Blount family of Eastern Carolina; his aunt Mary "Polly" Blount married the Reverend Charles Pettigrew, first bishop-elect of the Protestant Episcopal Diocese of North Carolina. Beasley's older brother John became a physician and practiced in Edenton for many years; he also had a sister, Martha, and four other siblings.

After a local education, Beasley entered the College of New Jersey at Princeton, probably in the late fall of 1795. His correspondence with his uncle Pettigrew reveals him as an extremely serious young man, concerned about atheism and alcoholism. He rejected law as a career, saying that "L stood for lawyer and L for liar." Instead, after reading a formidable list of theological and philosophical books recommended by his uncle, he began to express a desire to attain "perfection in religion." Although he considered teaching classical languages at The University of North Carolina following his graduation in 1797, he remained at Princeton as a tutor for two years while pursuing studies in theology. At this time he began a lifelong friendship with John Henry Hobart, later a bishop of the Diocese of New York.

In 1800, Beasley became a lay reader at Christ Church, New Brunswick, N.J.; he was ordained deacon in 1801 and priest in 1802. He began his parish ministry at St. John's Church, Elizabeth, N.J., where he remained only a few months before being called to St. Peter's Church, Albany. In 1809 he moved to Baltimore, Md., where he was associate rector of St. Paul's Church. His opening sermon was so well received that the vestry ordered it printed.

His interest in education continuing, however, he accepted the post of provost of the University of Pennsylvania at Philadelphia in 1813. For fifteen years he served both as administrator and as professor of moral philosophy. Although no longer a parish priest, he was active in the affairs of the Diocese of Pennsylvania, serving numerous terms on the standing committee, where he labored to raise the level of literary and theological attainment of candidates for holy orders. He was a close associate of Bishop William White, the dean of American bishops. In 1815, Beasley received the D.D. degree from Columbia College and also from the University of Pennsylvania.

Resigning in 1828, he traveled briefly to Kentucky and then became rector of St. Michael's Church, Trenton, N.J. He had never been strong, even as a college student; his health gradually declined, and he retired to Elizabeth in 1836. He died of "dropsy in the chest" and was buried at St. John's Church in Elizabeth.

Beasley was one of the four most prominent exponents of natural realism as taught and disseminated by the College of New Jersey at Princeton, ranking in company with John Witherspoon; Samuel Stanhope Smith, who had taught him; and Samuel Miller. The Princeton "school" opposed agnosticism, materialism, and idealism. It was dualistic: in its cosmology, it counterposed world and deity; in psychology, soul and body; in epistemology, subject and object. Beasley adhered strongly to this school, displaying a particular dualism; he attacked Hume and Berkeley in his most noted work, A Search of Truth in the Science of the Human Mind (1822); truth was not to be found by intuition, but by a slow process of trial and error. In his analysis of perception by the senses, he approached a modern psychological explanation of obsessions and idées fixes that long went unrecognized. Other published works included A Sermon on Duelling (1811); American Dialogues of the Dead (1815); A Vindication of the Argument a priori in Proof of the Being and Attributes of God, from the Objections of Dr. Waterland (1825); A Vindication of the Fundamental Principles of Truth and Order in the Church of Christ, from the Allegations of the Rev. William E. Channing, D.D. (1830); and An Examination of No. 90 of the Tracts for the Times (1842). He also wrote extensively for periodicals and at one point was involved in the Tractarian dispute.

He was married on 22 Aug. 1803 to Susan W. Dayton by whom he had one daughter. After her death, he married Mary [Maria] Williamson, by whom he had nine children, seven of whom lived to maturity. One son, Frederick W., became a clergyman, and a second entered law. His second wife survived him, dying on 2 July 1852.

Joseph Hooper, A History of Saint Peter's Church in the City of Albany (1900).