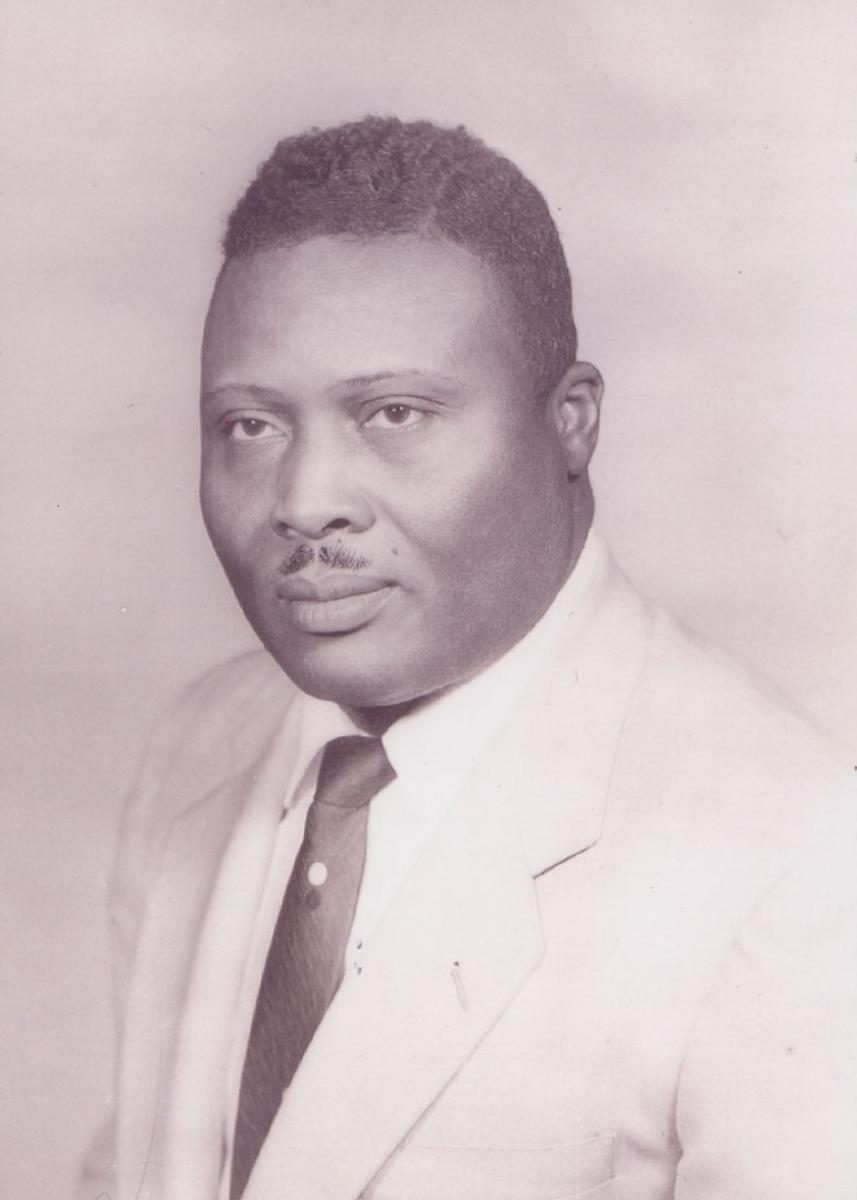 by Steven A. Hill, 2019
Published with permission. For personal educational use and not for further distribution.

Andrew Arthur Best, M.D. was a physician and civil rights leader in eastern North Carolina for more than half a century. Best was born in Lenoir County, North Carolina, the eighth of Lewis W. Best and Cassie Dawson Best's ten children. Best attended the Sunday school taught by his father, then a segregated neighborhood school until the seventh grade. He then enrolled in Kinston’s Adkin High School, from which he graduated in 1936. In 1940, he began his studies at North Carolina A&T University where he was a highly involved student. Best worked on the staff for the university's student newspaper and yearbook, The Register and The Ayantee. He was involved in other organizations on campus, including the Alpha Kappa Mu National Honor Society and Kappa Phi Kappa Debating Society. Best's studies at A&T were interrupted when he was drafted on April 30, 1943.

Best served in the US Army during the Second World War with the 371st Infantry Regiment in ground operations against Axis forces in the Po Valley Campaign in Italy. He rose to the rank of Captain and earned a Bronze Star and a Purple Heart. Best was injured in the line of duty and recalled later that there were “many brushes with death,” during the war. Soldiers under Best’s leadership had grown so familiar to being under fire that they could distinguish the sound of German mortar fire from that of their own ordinance as shells whizzed overhead.

Best returned from military service in 1946 and earned his baccalaureate degree -- with honors -- in agriculture from North Carolina A&T State University in 1947. He then entered Meharry Medical College at Nashville, Tennessee's Fisk University, where he was a member of the Alpha Kappa Mu, Alpha Phi Alpha, and Beta Kappa Xi fraternities. Best graduated as a medical doctor in 1951. After graduating from Meharry, Best was selected for the highly competitive military intern program and completed his one year internship at Madigan Army Medical Center on Fort Lewis in Washington state. Following his internship at Madigan, Best returned to North Carolina where he practiced medicine at Womack Army Medical Center on Fort Bragg until December of 1953.

As the end of Best’s involvement with the military neared, he visited cities across eastern North Carolina to determine where he would begin his own practice. It was during one of these visits that Best encountered an automobile accident on an icy road as he traveled from Kinston to Windsor and then toward Ahoskie. As he approached, he saw that a State Highway Patrol was upside down with the patrolman still inside -- pinned in the vehicle with a blanket impeding his breathing. Best and another passerby pulled the patrolman from the car and Best, having his medical bag with him, worked to stabilize the officer’s injuries, including a serious compound fracture of the femur protruding through the skin. After an ambulance arrived for the injured patrolman, Best proceeded to a service station in Ahoskie. He asked the clerk for a Coca-cola and a pack of chewing gum, and asked if there was anywhere for him to wash his hands. According to Best, the clerk responded that he had  “no damn place for niggers to wash their hands." Best left the service station, leaving the soda that the clerk had opened on the counter. Years later he still vividly recalled this interaction and his desire to respond with “Well, I got these hands dirty saving the life of one of you white folks,” but he stifled this impulse and continued on toward Ahoskie. This experience had a serious impact on Best, but rather than be embittered by the clerk’s callousness, he was encouraged. He would say later, “Here I am doing a service to mankind, and then I run into such people as that. That encouraged me more and more to make things right for humanity.”

In 1954, Best started his medical practice in Greenville, North Carolina, where he practiced medicine for the next fifty years. In Greenville, he focused on what he referred to as his four loves -- civil rights, education, medicine, and religion. Best worked creatively and diplomatically to end racial segregation in Pitt County without conflict. He worked with organizations such as the National Association for the Advancement of Colored People (NAACP) and the Southern Christian Leadership Conference (SCLC) in addition to many state and locally-based groups. By the late 1950s, Best and other community members had formed the Pitt County Interracial Committee, a voluntary committee dedicated to eliminating segregation in their community now known as the Greenville Human Relations Council.

Best is remembered as a civil rights leader in eastern North Carolina in part for his leadership in desegregating Pitt County Memorial Hospital where he served as the lone African American physician in the early 1960s. In what began as a joint effort to ensure adequate medical care for black infants, Best teamed up with Dr. Malene G. Irons to desegregate the hospital for both patients and staff. Because of the efforts of Best, Irons, and others, Pitt County Memorial Hospital was proactively desegregated years before the passing of the Civil Rights Act in 1964. For decades following, the Best-Irons duo worked together to soothe racial tensions and foster racial equity.  The Best-Irons Humanitarian Award, awarded yearly by the Greenville Human Relations Council, is named after the pair.

In addition to his work to desegregate Pitt County Memorial Hospital, Best was a major proponent of the integration of East Carolina University in the 1960s, beginning with the admission of Laura Marie Leary in 1962. But his civil rights career had begun more than a decade before his arrival in Greenville. Soon after World War II while a student at North Carolina A&T, Best was pictured in 1946 as a delegate at the tenth annual North Carolina Student Legislature Assembly in Raleigh, where the students had resolved that cooperation between races would build a better South.

Best founded The North Carolina Joint Council on Health and Citizenship (NCJCHC) in 1960. The focus of the NCJCHC was to counter the high rates of illegitimacy, illiteracy and poverty -- particularly as they related to people of color in eastern North Carolina.  At its inaugural event at the Charles M. Eppes High School on October 9, 1960, hundreds of African American school children listened eagerly, with local education officials J.H. Rose, D.H. Conley, and East Carolina University’s president, Leo Jenkins, in attendance. Samuel Dewitt Proctor, President of the Agricultural and Technical College in Greensboro, was the guest speaker and spoke favorably of Best’s vision. Proctor agreed with Best that education was the key to racial uplift, stating that “illegitimacy, delinquency and poor health were not racial traits,” and “there is no correlation between illegitimacy and color; it is between education and poverty.”

Best believed that healthcare should be provided wherever it was needed. He did just this when he called for increased efforts to stop venereal disease among young people through educational programs in public schools and in the community with free treatment at clinics. Together, Best and Dr. Malene Irons used their standing as medical professionals throughout Pitt County's school system in their efforts to teach students the habits of a healthy and safe lifestyle. Their health and welfare curriculum taught to school age students was reported to have been adopted by 18 counties across the state and made a graduation requirement in many high schools. As public schools were still segregated across the state, Best led educational programs in schools for black students while Irons led the programs in those for white students. Irons would later explain that the two were essentially “teaching sex ed, but of course we couldn’t call it that at the time.”

Best’s leadership in the medical profession was known statewide and nationally. Best was regarded as a “medical trailblazer” by the Old North State Medical Society. It was his leadership in the this organization that galvanized the support for the creation of the Brody School of Medicine at East Carolina University, despite objections by some that the state was not in need of another medical school. In 1972, the Old North State Medical Society named Best the Doctor of the Year. 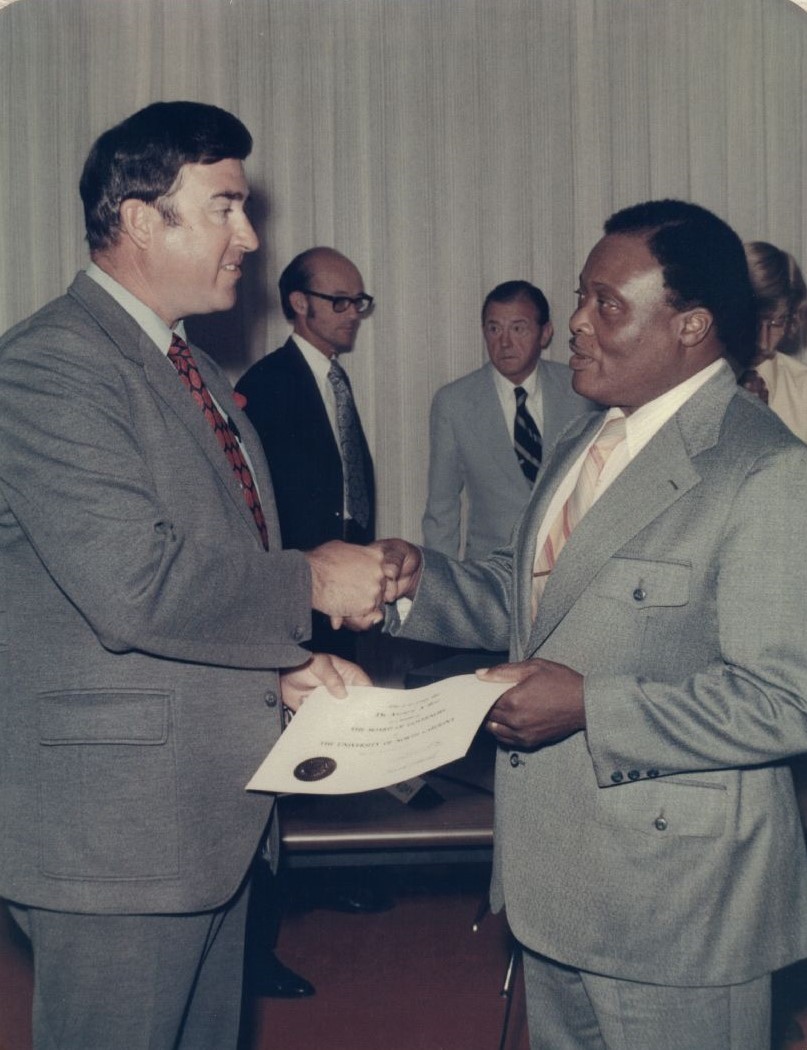 From his earliest days of medical practice, Best saw himself as an extension of God on Earth. Best did not hesitate to pray with his patients under his care, which led some to call him the praying doctor. An upbringing steeped in Christianity led him to lifelong membership in the Jericho African Methodist Episcopal Zion Church, and his decision to set up his medical practice in Greenville was partially influenced by his desire to be near enough to family and his church in the Jericho community. He served the church in many ways, including his election as the church’s Chairman of the Board. In 1972, under Best’s leadership, the church initiated a rebuilding campaign, resulting in the raising of $750,000 to complete a brick church, which was officially dedicated in July of 1974. Best recalled that he purposefully delayed the dedication to build up the church’s financial reserves so they could pay off the fifteen-year mortgage in 2 years, 11 months, and 17 days. Best’s leadership was crucial to the church’s rebuilding efforts, the functioning of the interdenominational youth union, and the Lay Council of the Cape Fear Conference, Wilson District, in which Best served as President.

Best’s life was not without controversy, however. During a state-wide investigation, Best was charged with six counts illegally dispensing controlled substances to undercover State Bureau of Investigation agents who had posed as patients at his practice. His arrest inspired peaceful protests in Greenville where many believed that the charges and arrests were intended to disgrace black leaders in the community. Best was found guilty on two of the six counts in November of 1975, but all of the charges against him were overturned unanimously by the North Carolina Supreme Court in 1977.

Dr. Samuel Proctor, mentor to Martin Luther King, Jr. and former president of A&T University said in 1972, “If A&T could graduate a man like Dr. Best once in every century, it would have served its purpose.” Proctor’s endorsement was reflected in the many awards and appointments that Best earned. Some of the awards earned by Best include the Masonic Journal’s Man of the Year 1974, the NAACP Certificate of Appreciation from D.D. Garrett in 1988, and the Order of the Long Leaf Pine in 2001. Best was the first African American member of the Board of Trustees at East Carolina University.  Other appointments and involvements included Advisory Council to the Administration Cherry Hospital and O’Berry School in 1961, the University of North Carolina System Board of Governors in 1972,  North Carolina A & T University Board of Trustees, the Executive Committee of the Old North State Medical Society, the Credentials Committee of the Pitt County Memorial Hospital, Greenville’s Housing Authority Board, and the Good Neighbor Council and its successor the North Carolina Human Relations Commission.