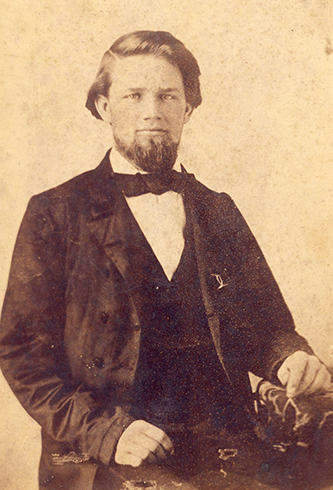 Henry Clay Bourne, soldier, farmer, merchant, and public official, was born near Portroyal, Tenn., the son of Catherine White Wimberley and Milton Bourne. His mother was a native of Robertson County, Tenn., but his father was born near Tarboro. From his birthplace, Henry Bourne moved to Brandon, Miss. During the Civil War he served in the Sixth Mississippi Regiment, attained the rank of colonel, and was wounded in the Battle of Shiloh. He moved to Edgecombe County to the home of his cousin, Robert Diggs Wimberley, to recuperate from his wound and then operated the Confederate Commissary on the railroad near Tarboro until the end of the war.

In the late 1880s, Bourne returned to Tarboro and acquired a farm known as White Oaks, where he lived the rest of his life. On 20 Nov. 1890, he married Maria Toole Clark (25 Dec. 1859–4 June 1907), the daughter of former Governor Henry Toole Clark. They had three children: Mary Parker, who married Edward Rugley, Henry Clark, who married Marion Frances Alston; and Katherine Wimberley, who went to Puerto Rico to do missionary work at St. John's School and died in San Juan on 14 Dec. 1922, as the result of an attack by a barracuda.

In Tarboro, in addition to farming, Bourne was a commission merchant for a few years and then became active in politics. He was justice of the peace, magistrate, and sheriff of Edgecombe County and was much in demand as the principal speaker on significant local occasions, such as the memorial services for President Jefferson Davis and the welcoming-home of Governor-elect Elias Carr.

Bourne and his wives were buried in Calvary churchyard in Tarboro.