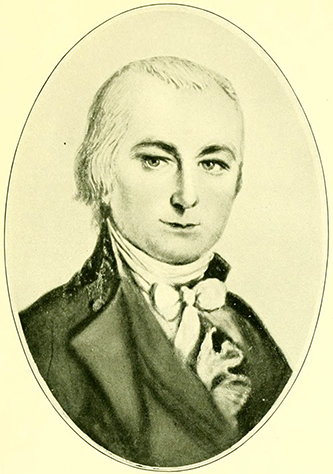 Joseph Brevard, Revolutionary War soldier, jurist, and congressman, was a native of Iredell County and a long-time resident of Camden, Kershaw County, S.C. A younger brother of Alexander Brevard, Joseph was of Huguenot and Scotch-Irish extraction. While little is known of his early education, he wrote a beautiful hand and quoted Latin with facility. He entered the Continental Army at age seventeen and became a lieutenant in the Tenth North Carolina Regiment before transferring to the Second as regimental quartermaster.

Joseph Brevard settled in Camden, S.C., at the end of hostilities and there soon gained a reputation for industry and integrity. He was sheriff of the Camden District (1789–91), and in 1791 was appointed commissioner in equity for the Northern District of South Carolina. In 1792 he was admitted to the bar and entered partnership with William Falconer, then the most eminent lawyer in the northern part of South Carolina. Brevard was elected circuit court judge in December 1801 and served ably until forced by poor health to resign in December 1815. A noted legal scholar whose opinions were characterized by industry, learning, and eloquence, Brevard compiled three volumes of reports and an admirable digest of the statute law to 1814. Upon his resignation as judge he resumed his legal practice in Camden. In 1818 he was elected a member of the Sixteenth Congress (4 Mar. 1819–3 Mar. 1821). He was a member of the House Judicial Committee; and, while he was not active in debate, he upheld the Constitution, opposed raising the tariff, and supported the admission of Missouri as a slave state. He was not a candidate for reelection in 1820 and was defeated in a special election in March 1821.

In March 1793, Brevard married Rebecca Kershaw, a daughter of Colonel Eli Kershaw, a revolutionary soldier who died a British captive. The Brevards had four children—Alfred, Edward, Eugene, and Sarah Aurora—before their union was ended by the death of Rebecca in 1802. Joseph Brevard was buried in Camden's Quaker Cemetery.

John Belton O'Neall, Biographical Sketches of the Bench and Bar of South Carolina (1859).