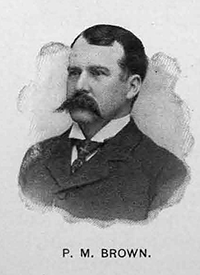 Peter Marshall Brown, banker, mayor of Charlotte, and trustee of Davidson College, was born in Charlotte, the son of Colonel John L. Brown and Nannie Kerr Brown. Brown grew up amidst wealth, in a good social position; he attended Macon High School and Davidson College, from which he was graduated in 1880. He then began working in his father's hardware business, Brown and Weddington Company, where he proved to be well suited for a business career. When his father died in 1893, Brown remained in the successful hardware business for two years before selling his interest in order to devote his time to another business and to community service. He acted as a pioneer organizer and eventual president of the Southern Loan and Savings Bank and served also as a president of the Southern Real Estate Loan and Trust Company and as a director of the First National Bank. In these positions he was able to aid significantly in building Charlotte's commercial future.

Between 1896 and 1900, Brown served ably as chairman of the Mecklenburg County Commissioners. He accepted this responsibility willingly and performed key service to his county, which was taking a lead in local improvements. Brown's interest in Charlotte and his diligent efforts as a commissioner stood him in good stead when he sought election as mayor of the city: he was elected in 1901 and reelected in 1903.

Brown had a particularly strong interest in education. His concern was demonstrated in his services as school commissioner of Charlotte and as an active member of the Davidson College Board of Trustees.

He was married to Jennie Beecher Bass on 14 May 1884. By this first marriage there were four children: Mrs. Gaston Galloway, John Bass, Mrs. Dolph M. Young, and William. Brown's wife died in 1898, and he was married on 8 Nov. 1905 to Daisy Bell Pharr, the daughter of a Presbyterian minister from Mooresville. There were no children by this marriage.

Because of good investments, especially in real estate, Brown became a very wealthy man. His wealth grew along with Charlotte, until his estate reached an estimated one-half to one million dollars.