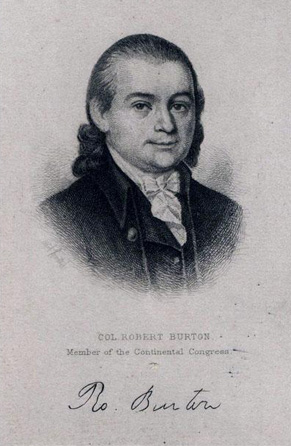 Robert Burton, member of the Continental Congress, Revolutionary War officer, and planter, was born in Goochland County, Va., the son of Tabitha Minge and Hutchings Burton and perhaps the grandson of Noel Burton, barrister, of Henrico County, Va. Burton moved to Granville County in about 1775, in which year he married Agatha Williams, daughter of Judge John Williams.

At the beginning of the Revolution, Burton became a lieutenant of Continental artillery; afterward he was quartermaster general of North Carolina with the rank of colonel. He served as a member of the council of state from 1783 to 1785, again during the period 1800–1807, and again in 1813–15. He was president of the council in 1807, 1813, and 1815. He was elected to the Continental Congress in 1785 but not seated until 1786; although he was elected again in 1787, to replace Timothy Bloodworth, there is no record to indicate that he attended. In 1789, Burton gave the state a bust of John Paul Jones, destroyed in 1831 when the capitol burned. Granville County records for 1790 indicate that he enslaved 14 people and owned 2,405 acres of land there, as well as nearly 6,000 in what was to become Tennessee. In 1813 he was a member of the commission to establish the line between North Carolina, South Carolina, and Georgia.

Burton's wife died in 1831; at his own death, he was survived by nine children. Two of his sons, Alfred M. and Robert H., both of whom attended The University of North Carolina, moved to Lincoln County. Robert H. was the grandfather of Confederate general Robert F. Hoke. The elder Robert Burton was the uncle of Hutchins G. Burton, governor of North Carolina.

Burton was buried on his plantation, Montpelier, at Williamsboro.