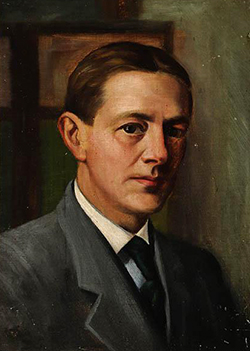 Jacques (Born James Littlejohn Busbee) Busbee, artist and reviver of Jugtown Pottery, was born in Raleigh, the son of Charles Manly and Lydia Littlejohn Busbee. Busbee prepared for a career as an artist. After graduation from Horner Military Academy in Oxford, he studied at the National Academy of Design, the Art Students' League, and the Chase School, all in New York, and for a time painted portraits and landscapes. Some of his work is owned by the North Carolina Museum of History.

On 3 Nov. 1910 he married Juliana Royster of Raleigh, who had studied photography in New York and would be his partner in the revival of Moore County pottery. In 1915 the Busbees were living in Raleigh, where Jacques supplemented his income as a portrait painter by writing and lecturing on topics related to North Carolina and art. In 1915 a long-standing interest in locating local potters was revived when Mrs. Busbee discovered an orange glaze pie plate while serving as a judge at the Davidson County Fair. The Busbees returned to New York in 1916; their collection of North Carolina pottery aroused the interest of art experts, who encouraged them to market the pottery. In May 1917 the Busbees went to the northwestern part of Moore County around Seagrove in search of local potters. They found the pottery industry languishing; prohibition had restricted the sale of their most marketable product, and only a few older potters continued the trade. The Busbees scanned the area, collecting old ware and information about early potters. They found that English Staffordshire potters had settled in the area about 1740, and they amassed a large collection of local pottery. Although the local potters were descendants of these Staffordshire potters, they had modified the traditional patterns and glazes.

The Busbees saw their task as twofold: to develop a market for the pottery and to encourage the potters to produce more marketable and traditional ware, rather than imitations of dime store ware. To develop a market, Mrs. Busbee opened a tea room, the Village Store, in Greenwich Village, where pottery and other handicrafts could be introduced to the New York market. The southern cooking and unique atmosphere insured the success of the restaurant, and by 1926 there was a sufficient market for North Carolina pottery for Mrs. Busbee to sell the Village Store and join her husband at Jugtown. 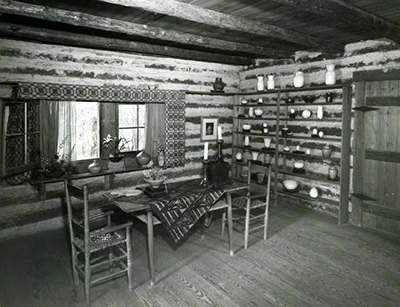 While his wife was in New York, Jacques Busbee spent most of his time in Moore County obtaining pottery for market. He gave the first orders to the established potters and supervised the shipment of their goods to New York. Busbee found it difficult to persuade the potters to return to the older styles. In 1921, in order to have a greater control over design, he built the potter's shop to be known as Jugtown, between Seagrove and Robbins. He hired young potters who would more easily accept his art training and his insistence on traditional shapes and glazes. Several of his potters later established their own potteries. Ben Owen, who came to Jugtown in 1923, remained until after Busbee's death in 1947. Jacques Busbee was not himself a potter; he saw his role as that of teaching art form to the skilled potters and assisting in developing formulas for the glazes.

Busbee recognized the market demand for greater variety in form. A serious student of ceramics, he considered the primitive and early periods of Chinese ceramics to be "the classic periods of the world's pottery." Accompanied by Ben Owen, he visited museums to study Chinese pottery. Busbee assisted Owen in reproducing the unfamiliar forms and developed a "Chinese Blue" glaze. The Jugtown "translations" of Oriental ceramics were among the most popular pieces. The Jugtown potters produced a wide variety of utilitarian and decorative pieces in a variety of glazes: orange, buff, a gray salt glaze stoneware with blue decoration, frogskin, and white.

The Busbees wrote articles for numerous magazines and gave lectures on Jugtown pottery to publicize their enterprise. They preserved the rustic setting at Jugtown, and the hospitality of their log cabin added to the atmosphere. Visitors dined on traditional fare cooked over an open fire and were expected to assist in drying the dishes when Mrs. Busbee brought the dishpan to the table.

Jacques Busbee died of a heart attack after a two-week illness, and his ashes were scattered in the Jugtown yard. By 1947, Jugtown pottery enjoyed international acclaim. Although the Jugtown operation remained small, the Busbees had publicized local pottery and revived and enhanced the craft. A collection of Jugtown Pottery is a part of the permanent collection of the State Art Society and is preserved in the North Carolina Museum of Art.