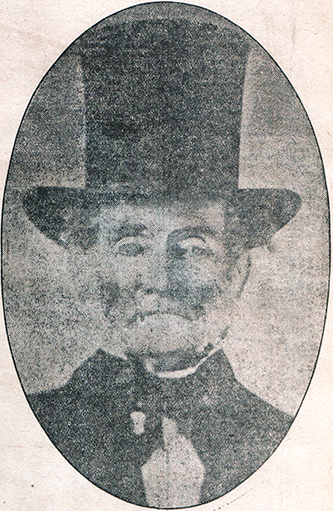 Eli Washington Caruthers, Presbyterian minister, educator, and historian, was born in Rowan County, near Salisbury. His parents were James and Elizabeth Lawrence Caruthers. The second of seven children, he received his early education from a tutor employed on his father's farm. He next attended a school taught by the Reverend Joseph Kirkpatrick, a Presbyterian minister. In 1812 he entered Hampden-Sydney College, where he paid his tuition by tutoring students. His college career was interrupted by a brief service in the War of 1812, after which he completed his baccalaureate degree at the College of New Jersey (now Princeton University). Following his graduation in 1817, he entered Princeton Theological Seminary to prepare for the ministry and was licensed to preach by New Brunswick Presbytery in April 1820. In 1821 he was called as minister of the Buffalo, Alamance, and Bethel Presbyterian churches of Guilford County; he was installed by Orange Presbytery in November of that year. He resigned the pastorate of Bethel Church after a year and gave up the Buffalo congregation in 1846. He remained as pastor at Alamance until 1861.

Like his predecessor in the pastorate at Buffalo and Alamance, David Caldwell, Caruthers was an advocate of the camp meeting and stressed the need for evangelism. Caruthers was known as an able minister, and over two hundred of his sermons in the collection of his papers in the Duke University Library demonstrate the high order of his homiletical ability. His sermons were usually didactic and were often elucidated by beautiful illustrations drawn from nature. Occasionally he abandoned this usual method to make earnest appeals to each class of his audience. He often exchanged pulpits with ministers of various denominations. Until 1846, when the congregation at Alamance required him to reside there, he lived in the little town of Greensboro.

Caruthers was much interested in education. He served as secretary of the Greensboro Academy and probably taught there in the 1820s. He was an active supporter of the Caldwell Institute, a Presbyterian preparatory school for boys, during the nine years (1836–45) it was located in Greensboro before its removal to Hillsborough. He served as teacher of Greek and for almost two years (1844–46) as president of the Greensboro High School, Greensboro's successor to the Caldwell Institute. In June 1847 he opened a classical school in the Alamance community. In 1850 he turned over the Alamance Classical School, as it was known by that time, to his assistant, Samuel Wiley, and began to devote his full energies to his ministerial duties and his historical research and writing.

It is as a historian of the American Revolution in North Carolina that Caruthers is best remembered. Recognizing the need to record facts concerning that period of the state's history before they should be lost to future generations, he wrote his first book, A Sketch of the Life and Character of the Reverend David Caldwell, D.D. (1842), which is less a biography than a repository of information about the Revolution and other aspects of state history. Caruthers's interest in the Revolution continued to grow, and he published two additional books concerning it: Revolutionary Incidents and Sketches of Character Chiefly in the "Old North State " (1854) and Interesting Revolutionary Incidents and Sketches of Character Chiefly in the "Old North State," Second Series (1856). Both volumes presented the Revolution as a civil war in North Carolina in keeping with Caruthers's belief, stated in the preface to the first volume, that "the horrors attending a 'civil' war should be held up as a warning against whatever might have any tendency to produce a similar state of things again." Much of the second series was a defense of the role played by the state militia in the war, especially at Guilford Courthouse. Caruthers received much help in gathering materials for these volumes from fellow historians President David L. Swain of The University of North Carolina and Griffith J. McRee of Wilmington. In turn, he supplied McRee with information useful in the preparation of his Life and Correspondence of James Iredell (2 vols., 1857–58) and tried, unsuccessfully, to secure subscribers for the work in Greensboro and the surrounding area. Caruthers regretted that his professional duties allowed him little time for historical study and that the smallness of his salary prohibited the purchase of more than a few books of history. In 1854, The University of North Carolina conferred upon him an honorary doctorate in recognition of his accomplishments as a historian and his contributions to the state as an educator and minister.

In addition to his published works, Caruthers left two book-length manuscripts of importance. The shorter of these is "Richard Hugg King and His Times," of which a typescript is to be found in the Richard Hugg King Papers, North Carolina Division of Archives and History, Raleigh. A biographical sketch of a leader in the Great Revival of the early nineteenth century in North Carolina, South Carolina, and Tennessee, it gives vivid descriptions of the revival as well as Caruthers's insight into the movement's emotional appeal. The longer manuscript, "American Slavery and the Immediate Duty of Southern Slaveholders," now located in the Manuscript Collection, Library, Duke University, was written at irregular intervals between 1840 and 1850 and includes several revisions and a second preface written in 1865. Described by John Spencer Bassett as "one of the strongest arraignments of slavery in the abstract that ever appeared," this work was undertaken at the request of a particular friend that Caruthers write down his views on the slavery question in order that they might be preserved for posterity. Unhappy with all previous publications on the slavery controversy, North and South, Caruthers "threw them every one aside and undertook to investigate the subject anew. . . ." He made the Bible his "main source of proof" and adopted as the basis of all his arguments "the fundamental principle that you can have no right to hold anything as property without an express grant from the Creator," which doctrine he declared he had never heard nor seen in any publication. Realizing that its publication or circulation would not be tolerated in any southern state at the time, Caruthers kept his manuscript secret from the public. The 1865 preface indicates, however, that he was by then contemplating publication, which was probably circumvented by his death shortly thereafter.

Caruthers's attitude toward slavery was nevertheless well known to his contemporaries. During the Civil War he had no sympathy for the southern cause, which he regarded as both unjust and ruinous for the South. Nonetheless, the Alamance congregation contributed heavily to the war effort. Twenty-five members of the church enlisted in the Confederate armed forces, and of these twelve gave their lives. Tradition has it that Caruthers publicly prayed in 1861 that the young men who had gone into the army might be blessed of the Lord and returned home in safety although engaged in a bad cause. An apparently apocryphal story states that on the following day a congregational meeting at Alamance Church demanded his resignation (there is no mention of such a meeting in the "Minutes of Congregational Meetings" of the church). Caruthers's letter of resignation, dated 5 July 1861, gives poor health as the reason for his wish to retire from the active ministry, as does the historical sketch of Alamance Church published in 1880 by Calvin H. Wiley, to whom as clerk of session Caruthers's letter was addressed.

Caruthers, a lifelong bachelor, spent the remaining four and a quarter years of his life at the home of Fountain B. McLean near Greensboro. He died there and was buried in the graveyard of Alamance Church, where the congregation erected an appropriate marker over his resting place.

Alamance Presbyterian Church, for Minutes of Congregational Meetings (1820–65) and Minutes of Session (1820–65).

"Eli Caruthers. This picture is a photographic reproduction, furnished the library [sic] by S. L. Alderman, of the old daguerreotype referred to in the article. The portrait in the Battleground musuem was made by David L. Clark, of High Point, from the same daguerreotype." Photograph. Greensboro Daily News. August 13, 1922.

Property records show that he

Property records show that he owned the back portion of our home from the mid 1820's to the mid 1830's. It was then sold to Washington Jefferson McConnell who added the front portion. This house has been moved four times, for various reasons, the last being to get out of the way of an expanding county jail. It currently faces Blandwood Mansion in Greensboro.