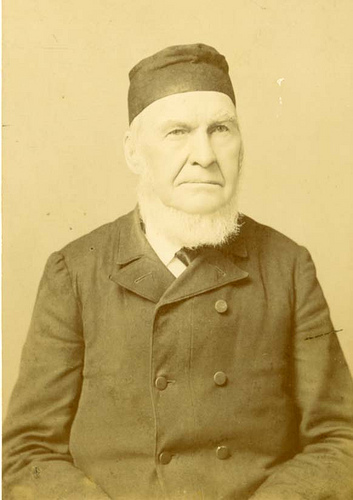 Addison Coffin, abolitionist and educational, temperance, and agricultural leader, was born at New Garden (now Guilford College), son of Vestal and Alethea Fluke Coffin. The Coffins were descendants of Nantucket Friends who settled in Guilford County before the Revolution. Coffin was educated at the New Garden Brick School under Horace Cannon and at New Garden Boarding School. Owing to the death of his father in 1826, he was much under the influence of his cousin, Levi Coffin, and early became active in the abolition movement, in the establishment of Sabbath school and temperance societies, and in the promotion of women's rights.

A lifelong traveler, Coffin in 1843 walked five hundred miles to Cincinnati, Ohio, from which vantage point he visited settlements of North Carolina emigrants and attended the first National Abolition Convention. In 1843–44 he taught school. Returning briefly to North Carolina, he then removed permanently to Indiana in February 1845.

During his maturity, Coffin farmed, taught school in winters, and yet found time to engage actively in the religious and political activities of the day and especially in the abolition movement. Owing to the necessary secrecy involved, few details are known of the means by which runaway slaves were assisted to reach free territory, but Coffin was a conductor of the Underground Railroad and made many secret journeys with hairbreadth escapes. During the Civil War he suffered much criticism for holding strictly to the Friends' tenets of peace, though he engaged actively in alleviating the suffering caused by the war. His home was a center for the protection of conscientious objectors, widows, orphans, and other victims of the times.

In 1866, in cooperation with the railways stretching through the west, Coffin organized emigrant trains from North Carolina and South Carolina, known as Coffin's trains, which bore people from the war-stricken Carolinas to the rich lands of middle America, where many of their relatives had gone during the prewar migration. In the decade following the war he led thousands from North Carolina, depopulating whole communities. These bewildered groups, passing through Baltimore to the distributing point in Cincinnati, excited the interest of the Baltimore Association of Friends, who thought that the problem should be attacked at its source and the people taught to be self-supporting where they were. The Quaker interest resulted in the establishment of a model farm near High Point, demonstrating improved conservation methods and development of natural resources. The Friends established schools, taught by volunteers of the association, and teacher training institutes designed to aid the educational process until the states could take over the effort.

In 1891, Coffin returned to North Carolina for the funeral of his mother, who had wished to be buried by her husband. For several years he remained largely in the New Garden area, lecturing on temperance, education, agriculture, and women's rights and interspersing tales of his extensive travels. In 1892, accompanied by J. Van Lindley, he made a nine-month tour of Egypt, Palestine, Asia Minor, and all the countries of Europe. In 1895 the inveterate traveler made his last long journey, to Mexico, in company with Julia Ballinger, a niece who was a missionary there. He returned as usual to lecture on the wonders of the world. At seventy-five, Coffin retired to the home of his daughter in Amo, Ind., where he died. He was buried near Hadley, his home in Indiana.