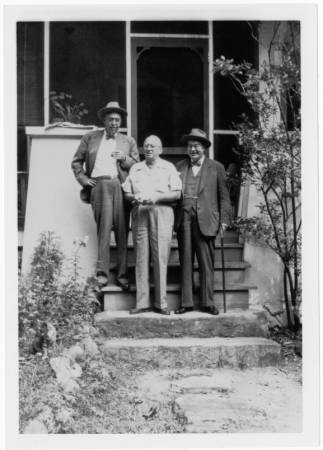 Oscar Jackson Coffin, newspaperman, professor, and dean of the School of Journalism, The University of North Carolina, was born at Carter's Mill in Moore County on a farm within the present city limits of Robbins, the son of Alexander Horney Coffin and Ida Elizabeth Moring Coffin. The home once served as a toll house along the old plank road between Salem and Fayetteville, and his grandfather, Bethuel Coffin, served as tollkeeper. Coffin attended public school in Asheboro, where Dr. N. C. Newbold described him as "the brightest, most mischievous student I had." He entered The University of North Carolina in 1905 and was graduated in 1909. He reported news for the Asheboro Courier in 1910 and was sports editor of the Winston-Salem Journal in 1911. In early 1911 he was Abbotsburg High School principal.

Coffin and Gertrude Wilson of Haywood County were married 5 Sept. 1912 and had one son, Edwin Wilson.

Coffin served as news editor of the Charlotte Observer from 1912 to 1916 and also worked briefly for the Roanoke Rapids newspaper. As city editor (1916–18) and editor (1918–26) of the Raleigh Times, he wrote penetrating editorials that increased the Times readership and kept capitol officials uneasy. His barbed wit often pricked thin skins. An itinerant evangelist whom he termed an "immigrant ignoramus" sued him for twenty-five thousand dollars, but Coffin won the suit. Other than millions of words in newspapers, his only published writing was a seventy-nine-page pamphlet of humorous blank verse about state legislators, entitled A State House Anthology (1917).

Coffin's iconoclasm prompted the charge that he was atheist; he countered, "I was flushed in an August revival and have been a member of the Methodist church ever since."

He returned to Chapel Hill in 1926 to succeed Gerald W. Johnson as teacher of journalism and was designated dean when the department achieved the status of a school. Professorial contemporaries often viewed him as an academic maverick and noted especially his irreverence for textbooks. He never referred to a journalism text, preferring that his staff teach from actual experience. He tried to employ former newsmen "who had met a payroll." If he had one text, it was the Bible, which he said "every good newspaperman should know"; his own speech was sprinkled with scriptural quotations. He also spiced his lectures with salty observations from real life: his "ten commandments" to aspiring newsmen always began, "Thou shalt not take thyself too damn seriously." When a student asked his opinion of a post-prohibition beverage known as "near beer," his reply was, "Whoever named it was a helluva judge of distance." Yet if a student used slang or profanity he was chastised for his "laziness" and urged to employ the King's English. Coffin's discipline taught many writers to use precise linguistic discrimination and a wide variety of styles.

Coffin urged an interest in government from city hall upward and counted the growing complexity of public administrations a challenge to newspapermen. He discouraged "sewage" in media reports and, to the irritation of publishers, emphasized his wariness of newspaper monopolies.

His sense of the obligations of citizenship led him into political activity in his community and state. When the Democratic executive committee for the Sixth Congressional District became deadlocked in search of a candidate, Coffin advanced the name of Carl T. Durham, little known outside the circle of young friends he had made as Chapel Hill druggist, and succeeded in winning the nomination of this representative from the least populous county in the district. Durham served with distinction and ultimately headed the trail-blazing Joint Committee on Atomic Energy during the era from which peacetime nuclear industry emerged. Politicians who first scoffed at Coffin's choice lived to praise him for his judgment.

Coffin was buried in the old Chapel Hill Cemetery.