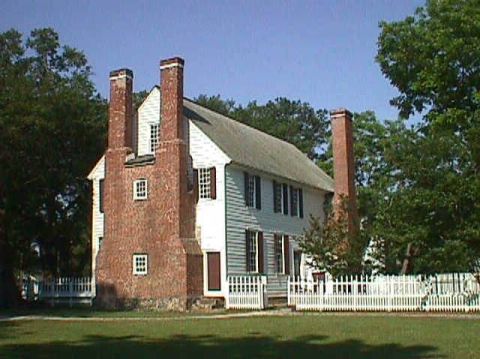 Michael Coutanche, colonial official, was a native of the island of Jersey. On 5 Mar. 1739, as Captain Michael Coutanche of "Boston, in New England, Mariner," he bought lots 24 and 25 in Bath Town. He evidently soon removed to North Carolina; by January 1740 he was referred to in a deed on record in Beaufort County as "Merchant of Bath." Soon becoming prominent in his new home, Coutanche was made a justice of Beaufort County in 1745 and was elected to serve the borough of Bath in the colonial assembly the same year. With the exception of the year 1746, he represented Bath Town in this capacity continuously until 1760. In 1753 he was one of the commissioners appointed by the North Carolina colony to lay out a town on Core Banks near Ocracoke Inlet and to erect a fort, to be called Fort Granville, at the same place.

Soon after his arrival in Bath, Coutanche married Sarah Pilkington, daughter of Seth Pilkington and his wife, Sarah Porter, the daughter of John Porter and widow of John Lillington, who died in 1723. Coutanche made his will, dated 1762, in Beaufort County, mentioning therein his wife, Sarah, children Susanna, Michael, and Benjamin, and his small estate in the parish of St. John on the island of Jersey. Son-in-law Richard Evans was appointed executor. Benjamin Coutanche died young. Michael, Jr., styled of "Beaufort County" in June 1761, bought lots 105 and 106 in the new town of Tarboro; he evidently died childless, because his sister later sold this property. Prior to 1763, Sarah Pilkington Coutanche became the third wife of the Reverend Alexander Stewart, rector of St. Thomas Church, Bath, who is said to have come to North Carolina as chaplain to the household of Governor Arthur Dobbs.

Coutanche is best known for the fine house he built in Bath Town a few years after his arrival. It has been assigned the date of 1744 and is now one of the oldest houses in the state. On his death, the house was owned for a year by the brothers James and Lillington Lockhart, first cousins to Sarah Pilkington Coutanche. It was then bought by Robert Palmer, surveyor general of North Carolina. Familiarly known as the Palmer-Marsh house, it was restored and handsomely furnished in recent years by the Beaufort County Historical Society and is now maintained as a museum.

The Coutanche family exists on the island of Jersey today and is considered of ancient origin. Like other Jersey families, the Coutanches are of French descent; some early connection with the city of Coutances in Normandy may be inferred. In North Carolina the name has been subject to many variations in spelling. In Greenville, Cotanche Street commemorates the Evans-Coutanche connection.