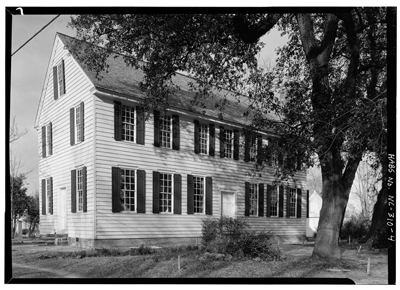 Robert Palmer, was a native of Scotland who entered royal service as a purser in England in 1750. In June 1753 he received a royal commission under the sign manual as surveyor general of North Carolina, and on 8 November he took his oaths of office in the colony and assumed the post of collector of the Port of Bath as well. With such influential positions, Palmer began a rapid rise within North Carolina politics and society. He was named justice for the New Bern district of the supreme court in March 1756 and justice of the peace for Beaufort County in 1760. In April 1762 he was elected to the General Assembly from Bath, and on 27 Aug. 1764 he took his seat on the royal Council of the province, having been earlier nominated by Governor Arthur Dobbs.

In July 1764 Palmer purchased a fine house in Bath from the Lockhart family for £1,012. Edmund Fanning would later say it was one of the best-furnished houses in North Carolina. Noted for its massive chimneys, the dwelling stands today.

Palmer served ably on the Council under William Tryon's administration, and the governor looked upon him as a trusted adviser. He appointed Palmer a commissioner for drawing the Cherokee boundary agreement in May 1767 and made him adjutant with the rank of lieutenant general for the first Regulator expedition in 1768. At the close of 1770 Tryon named him provincial secretary and crown clerk; Palmer, in turn, designated his only son William to be his deputy.

When the backcountry erupted into renewed Regulator conflict early in 1771, Palmer, as colonel of the Beaufort militia, was ordered to march. Tryon appointed him an aide de camp, and Palmer participated in the Battle of Alamance on 16 May 1771. The day after the battle he was one of those who urged Tryon to issue a general pardon to all Regulators who laid down their arms and took oaths of allegiance.

Late in 1771 Palmer returned to England in poor health, claiming that he needed the air of the mother country to recover. He resigned his North Carolina offices over to his son. During the Revolutionary War Palmer never heard from his son, who had sworn an oath to support the Patriot cause. In July 1785 Palmer received word that William was dead, and the following month he returned to North Carolina. In fact, his son was not dead but in extremely poor health, having been driven to drink (as Palmer told the Loyalist Claims Commission) by the harassment of North Carolina rebels who thought him too loyal to the Crown. Within a few months William was dead, and all of the Palmer property in North Carolina was confiscated. Robert returned to England.

Later in England, when making claims for his losses, Palmer valued his North Carolina holdings at £10,000 sterling. He had owned fifty slaves and valued the surveyor generalship at £600 sterling per annum and the collectorship of Bath at £200. In 1788 the Loyalist Claims Commission made a settlement on him of £762 plus £300 per annum for his lifetime.