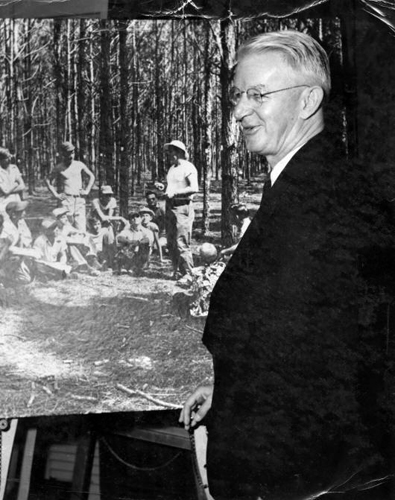 Walter Julius Damtoft, forester and business and civic leader in western North Carolina, was born in Southport, Conn., the son of Knud Julius and Dagmas (Jacobi) Damtoft. He received a bachelor of philosophy degree from the Sheffield Scientific School of Yale University in 1910 and a master of forestry degree from Yale in 1911. From 1911 to 1917, he served as a forest examiner with the U.S. Forest Service in Colorado, Virginia, Tennessee, Alabama, Georgia, New Hampshire, and North Carolina. In 1917 he was named administrative assistant of the Pisgah National Forest.

Upon his appointment as chief forester of the Champion Fibre Company of Canton, N.C., in 1920, Damtoft became one of the nation's first full-time professional industrial foresters and the first trained forester to be employed by a pulping enterprise in the Southeast. Other positions he held with the pulp and paper company included assistant secretary, assistant secretary-treasurer, assistant division manager, assistant secretary of the general woods department, and vice-president and general manager of Hamilton Laboratories, a Champion subsidiary in Asheville. He retired in 1958. At Champion, he and President Reuben Robertson were early pioneers in adapting forest conservation, selective cutting, and reforestation practices to commercial timber operations. Through speeches, demonstrations, and articles, he urged area farmers, industries, and state officials to manage the forests so that they could continue to be used in the future.

Damtoft was awarded an honorary doctorate of forest science by North Carolina State University in 1954 and was an honorary alumnus of the Biltmore Forestry School. In 1956 he received the Achievement Award of the North Carolina Forestry Association.

Damtoft married Keene Martin in 1917; she died the following year. In 1921 he married Dorothy Athenson of Asheville. They had two children, Anne Elizabeth Damtoft Campbell and Walter Athenson Damtoft. Damtoft was a Democrat and an Episcopalian. He was buried at Riverside Cemetery, Asheville.