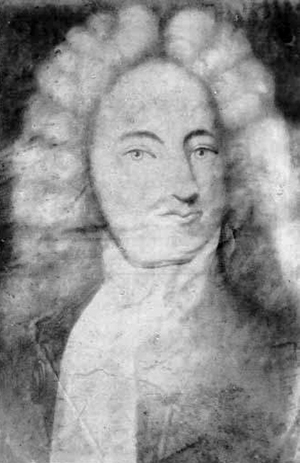 Robert Daniel, a prominent figure in the politics of both North Carolina and South Carolina, arrived in South Carolina from Barbados about April 1677 and took up warrants on 1,500 acres of land. He returned to Barbados briefly but had settled in Oyster Point, S.C. by 1679. Early in his career he became associated with the antiproprietary Goose Creek faction and was a leading participant in political agitation during Philip Ludwell's governorship in 1692. When the Lords Proprietors issued a general pardon to the agitators the following year, Daniel was one of two men excluded from its provisions. However, his social prestige in the colony remained high (he had been named a landgrave in 1691), and in December 1697 while visiting in England he was made deputy to the new Earl Craven. While revising the Fundamental Constitutions in 1698, the Proprietors consulted frequently with Daniel; later that year he returned to South Carolina with the completed revisions.

As a Proprietor's deputy Daniel was entitled to membership on South Carolina's council, in which he subsequently took an active role. Like so many of his fellow Barbadians in the colony, Daniel was a loyal supporter of the Church of England, and he led the successful opposition to appointment of a dissenter as president of the council in 1700. Two years later he participated in an expedition to Florida to fight the Spaniards and Indians and earned a solid reputation for bravery. When the high Anglican, Sir Nathaniel Johnson, became governor of Carolina in March 1703, he turned to Daniel for frequent counsel. In July Johnson sent the landgrave to North Carolina as deputy governor. Shortly after arriving in the Albemarle region, Daniel set about gathering prominent Anglicans as councillors and provincial officers. Early in 1704 the document arrived with which the deputy governor would purge the North Carolina assembly of its large number of dissenters. From England the Privy Council had ordered that all persons in places of public trust must pledge an oath of allegiance to the recent Queen Anne. Daniel required that all members of the government swear to the oath; he would not allow affirmations as had been done in the past. Because Quakers were prohibited from swearing by their religious creed, they were barred from the assembly that met late in 1704. This purged body then passed a vestry act requiring public support for the erection of Anglican churches, as well as a measure barring from the government anyone who had not sworn to the oath of allegiance.

North Carolina dissenters began seeking ways to get rid of Daniel and, with their counterparts in South Carolina and their friends in England, succeeded in pressuring Governor Johnson to remove Daniel from office early in 1705. During the following four years Daniel seems to have frequently traveled back and forth between North Carolina and South Carolina. He owned considerable property in Bath County at the time but also served in the South Carolina lower house of assembly from 1706 to 1709. In 1708 he participated briefly in the North Carolina upper house during the contest between Thomas Cary and William Glover for the presidency of that body. For reasons that are unclear, Daniel never allied with either man and withdrew to Bath where he apparently married a woman named Martha Wainwright. His first wife, Dorothy, had died earlier in South Carolina.

In 1709 Daniel deeded most of his North Carolina holdings to Martha to help her in rearing their son, John, and returned to South Carolina as his permanent residence. He lived in Charleston in 1710 and moved to the Waccamaw area the next year. During the period 1713–15 he again served in the South Carolina assembly. When in August 1712 that body was seeking a commander for its forces preparing to battle the Tuscarora in North Carolina, Daniel was offered the position, but his terms were considered too extravagant. However, he did lead troops during the Yamasee War in South Carolina in 1715.

When Governor Charles Craven left South Carolina in the spring of 1716, he named Daniel as his deputy to preside over the government. By this time Daniel was an old man close to senility, and he became embroiled in a series of petty arguments with the legislature over questions of personal privilege. He was succeeded by Governor Robert Johnson in the fall of 1717. By early May 1718 Daniel was dead. He had named his wife Martha as his executrix and had made bequests to a son- and daughter-in-law and two grandsons. He was also survived by a daughter, Martha, a noted South Carolina florist and wife of Charles Logan. She died in 1779 at the age of seventy–seven.

William Darlington, Memorials of John Bartram and Humphrey Marshall with Notices of their Botanical Contemporaries (1849).